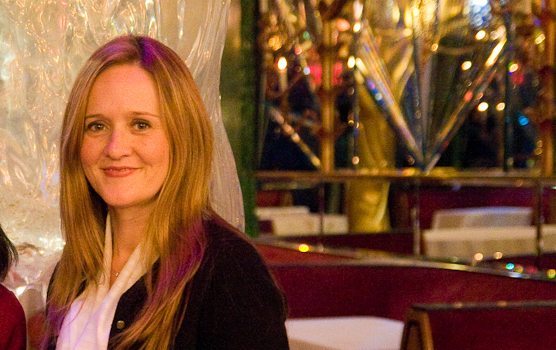 Image courtesy of/ derivative of [Justin Hoch via Flickr]

You know the feeling when you’re witnessing something amazing, and it makes you a little sad that no one else is there to see it? There’s a television equivalent to that–when you’re watching an amazing show with disappointing ratings and you hope against hope that the sponsors and executives will continue supporting it for the art’s own sake. In another context, you might feel a little proud to be enjoying something that the general public hasn’t caught onto yet–but you can’t because you’re too worried that the program won’t last long enough (see: any good show on the CW.) That’s exactly how I feel watching “Full Frontal with Samantha Bee.”

If you don’t remember her, she was a correspondent on “The Daily Show” who did hilarious exposés and interviews ranging from abortion rights and labor laws to women and gays in the military. “Full Frontal” is her standalone late night show, and unbeknownst to seemingly everyone, it’s the best late night talk show for political coverage. While the primaries and the general seem exhausting, it’s always nice to have a voice of sanity you can tune into every week, and if you haven’t tried “Full Frontal,” you’re really missing out.

What makes Samantha Bee’s program head and shoulders over the others? Shall I compare her to the other hosts?–after all, she art more lovely and less temperate. There are of course the three Jameses: Fallon, Kimmel, and Corden are all goofy and fun, but they’re rarely political. Seth Meyers has short political segments called “a closer look,” which are usually informative but full of very flat jokes. Colbert’s new show has some highlights, but the tone is generally very silly. He’s a gifted live interviewer, but the show’s other material can feel repetitive. John Oliver has great long form excerpts, but they’re not consistently about politics, and aren’t usually about current news. Bill Maher is consistently political and keeps up with the election, but is often too abrasive and acerbic, and can alienate those who aren’t on the far-left. I’ve got to be honest, I haven’t seen much of Trevor Noah. I asked some friends who like the show what he’s like, and I heard that he is “dreamy” and has “the cutest accent.” So I guess he’s got that going for him.

Samantha Bee manages to mix together all the best elements of the other hosts to create the best late-night refuge from political craziness. Her best segments teach you something new while making you laugh–and include a call to action to right wrongs. Plus, none of the aforementioned guys have jackets anywhere near as cool as Sam’s.

After working with Jon Stewart so closely, it’s no surprise that she has a well-developed knack for making jokes about topics like mass shootings and rapes without seeming callous or mean-spirited. The delicate balance between serious punditry and side-splitting commentary can be treacherous, but Bee’s explanation videos manage both perfectly. Some highlights include the origins of the religious right movement, abortion restriction in Texas, and explaining what the hell superdelegates are. Just about any video produced for her show will teach you something new, and arm you with funny one-liners about the election perfect for any office party schmoozing.

For a glimpse at how she unflinchingly tackles a subject matter as taboo as rape, check out this video of her argument for passing MJIA, a bill regarding military sexual assault.

She also has a segment where she interviews a group of people to better understand them–and while it’s not always comfortable, it’s always hilarious. Her ‘unironic’ interview with Trump supporters and her meeting with the “Bernie bros,” are great examples.

On the “Colbert Report,” Colbert’s character was a staunch conservative, and his opinions made him interesting to watch. Even if his opinions weren’t real, they provided satirical outlets for his writers’ actual opinions.  Samantha Bee doesn’t pretend to be an impartial observer–she’s got strong opinions, and that’s exactly why her show is interesting. She has an angle, and she owns it. It’s time for more people to tune in.