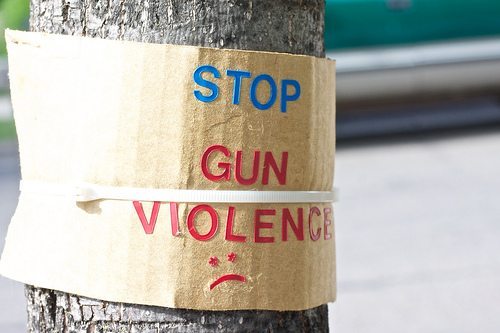 On December 4, Spike Lee’s much debated new film “Chi-Raq” hit theaters. Some viewers approached the trailer and storyline with trepidation in the wake of its release, as the movie satirically approaches the issue of gun violence in Chicago. After an innocent seven-year-old girl dies in crossfire between the Spartans gang, led by rapper Chi-Raq (Nick Cannon), and rival Trojans gang, led by Cyclops (Wesley Snipes), Lysistrata (Teyonnah Paris), Chi-Raq’s girlfriend, leads a sex strike. The plot is loosely based off the ancient Greek comedy “Lysistrata,” by Aristophanes. Dolmedes (Samuel L. Jackson), the narrator of the film, alludes to such a connection in the opening scene.

Initially, I found the idea of a satirical film about gun violence in Chicago misguided and disconcerting, especially considering the disheartening reality of tragic loss multiple Chicagoans endure everyday due to guns. The name of the film itself references a Chicago nickname dubbed several years ago, its origins unknown, which compares the homicides in Chicago to the death of Americans in the Iraq War. The movie begins with the statistic: between 2003-2011 American deaths totaled 4,424, while homicides in Chicago from 2001-2015 topped 7,356. This year alone there have been 2,221 shootings in Chicago, and police have confiscated 6,521 illegal guns.

Some of the consistently serious tones of the movie revolve around Irene (Jennifer Hudson) the mother of the seven-year-old girl killed. No one admits to the killing, and witnesses neglect to come forth about it. The painstaking silence is strikingly similar to the case of Tyshawn Lee–a nine-year-old boy lured into an alley and killed on November 7th in Chicago in gang retaliation against his father. Not until November 27th did police take Corey Morgan into custody and charge him with first degree murder.

“Chi-raq’s” fictional storyline blatantly mixed with reality during a powerful scene when Lysistrata and her sex strike supporters shouted the names of victims Trayvon Martin, Sandra Bland, and Tamir Rice, among other names. But missing from the list was Laquan McDonald who, sadly, actually might have made the movie had Chicago Police not withheld footage of his shooting for over a year.

“Chi-Raq” could not come at a more relevant time. Yet the lag in political action against gun violence almost ensures that any moment would be appropriate for “Chi-Raq.” While politicians discuss stricter gun regulations yet again on account of the tragedy in San Bernardino someone will lose a son, daughter, brother, or sister to a gun. However, terrorism or assault rifles will not necessarily be the blame for these deaths. Instead, Lee brings attention to the realities of gun violence not always discussed after mass shootings.

Some Chicagoans may dislike “Chi-Raq” for its failure to depict the lived reality of the South Side of Chicago in a genuine form, but it is not meant to be absolutely true to life. Kevin Willmont and Lee poetically infuse insightful criticism of the politics of gun regulations, the systemic oppression of the black community, and the impact of gang violence. The satirical foundation of the plot might not appeal to everyone and the movie has its issues, but the serious moments constantly remind viewers of the real-life victims. Now the only thing I find disconcerting about the film is its likeness to the front page news: how long will the same tragedies continue to happen until things change?

Dorsey Hill
Dorsey is a member of Barnard College’s class of 2016 with a major in Urban Studies and concentration in Political Science. As a native of Chicago and resident of New York City, Dorsey loves to explore the multiple cultural facets of cities. She has a deep interest in social justice issue especially those relevant to urban environments. Contact Dorsey at Staff@LawStreetMedia.com.
Share:
Related ItemsChi-RaqChicagoCrime in AmericaMurderPolicePoliticsRacismSatireSpike Lee