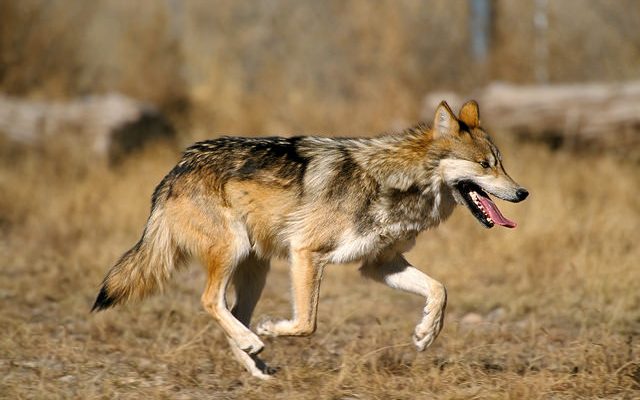 The U.S. Fish and Wildlife Service (FWS) released a draft recovery plan for endangered Mexican gray wolves on Thursday. An Arizona district court ordered the FWS to complete the plan by the end of November.

The last time the FWS revised the recovery plan for the Mexican wolves was 1982. The new recovery plan focuses on increasing wolf populations in Arizona, New Mexico, and Mexico.

“At the time of recovery, the Service expects Mexican wolf populations to be stable or increasing in abundance, well-distributed geographically within their historical range, and genetically diverse,” a FWS statement said.

The recovery plan provides for the establishment and maintenance of “a minimum of two resilient, genetically diverse Mexican wolf populations.” According to the plan, the Mexican gray wolf will be considered for downlisting from endangered to threatened status when there are at least 320 wolves in the U.S. and 170 wolves in Mexico.

Michael Robinson, a conservation advocate at the Center for Biological Diversity, said that threshold is “far fewer wolves than the number scientists have said is necessary for a viable population.” Robinson also criticized the plan for not including regions that scientists have said would be “essential to their long-term survival,” including the Grand Canyon.

Before becoming endangered, the Mexican gray wolf, or “el lobo,” roamed northern Mexico and throughout Arizona, New Mexico, and Texas. The Mexican gray wolf was listed as an endangered subspecies under the Endangered Species Act in 1976, and was absorbed into the endangered species listing of the gray wolf in 1978. Efforts to reintroduce wolves to the wild began in the late 1990s.

According to the Mexican Wolf Interagency Field, there are currently only about 100 Mexican gray wolves in New Mexico and Arizona. Environmentalists and wildlife advocates have supported efforts to release more captive wolves into the wild. However, they met opposition with ranchers and rural leaders who worried that the wolves would attack livestock and wild game.

In June 2016, the New Mexico Department of Game and Fish brought a case against the U.S. Department of the Interior, the FWS, and certain government officials for releasing two Mexican gray wolf pups in New Mexico without a state permit. New Mexico, along with 18 other states, argued that the Endangered Species Act required the federal government to work with them to determine how species would be reintroduced inside of their borders. The district court enjoined the defendants from releasing any Mexican gray wolves into New Mexico without a state permit.

In April 2017, the 10th Circuit U.S. Court of Appeals ruled that the New Mexico Department of Game and Fish had failed to present sufficient evidence that they would suffer irreparable harm due to the release of the wolves. The appellate court reversed and vacated the district court’s injunction and remanded the case to the district court.

Following the FWS’s release of the recovery plan draft this week, Bryan Bird, Southwest program director for Defenders of Wildlife, called the plan a “backroom deal” that restricts the wolves from moving in suitable habitats. He also noted that President Donald Trump’s planned border wall will cut off access for wolves trying to pass between the U.S. and Mexico and make the wolves “incapable of beating the clock of extinction.”

“Future generations should have the chance to hear wolves howl on the landscape,” Bird said. “Scientists–not politicians who had undue influence on the recovery plan for Mexican gray wolves–should be making decisions about how best to protect endangered species and their habitat.”

Marcus Dieterle
Marcus is an editorial intern at Law Street. He is a rising senior at Towson University where he is double majoring in mass communication (with a concentration in journalism and new media) and political science. When he isn’t in the newsroom, you can probably find him reading on the train, practicing his Portuguese, or eating too much pasta. Contact Marcus at Staff@LawStreetMedia.com.
Share:
Related Items10th Circuit U.S. Court of AppealsArizonaCenter for Biological DiversityDefenders of WildlifeDepartment of InteriorEndangered Species ActMexican Gray WolfMexicoNew MexicoNew Mexico Department of Game and FishU.S. Fish and Wildlife Service