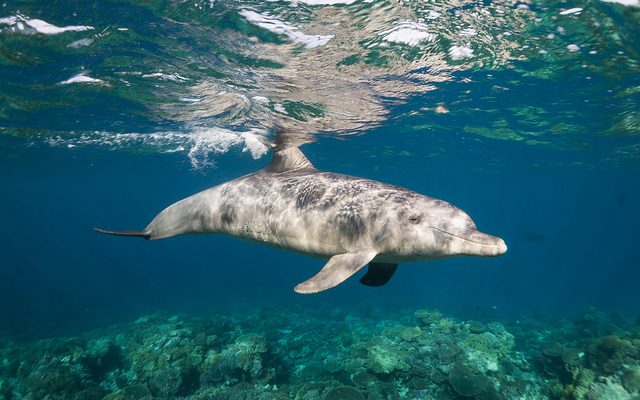 The Trump Administration is proposing to allow seismic air guns to survey oil and gas deposits along the U.S. Atlantic coast, but some environmentalists are concerned that the surveys could harm marine mammals.

Seismic air gun surveys use ships that tow seismic air guns. The guns are used to shoot compressed air through the water and into the seabed. That blast reflects back information about oil and gas deposits below the seabed, according to Oceana, an international advocacy organization focused on ocean conservation. The guns shoot compressed air every 10 to 12 seconds, said Ingrid Beidron, a marine scientist and campaign manager at Oceana.

The use of seismic air guns has a controversial history due to its impact on the environment. The Associated Press reported that the United States has not conducted any seismic air gun surveys in the mid- and south-Atlantic regions for at least 30 years. In January, the Obama Administration denied six energy companies’ applications for permits to conduct air gun seismic surveys in those regions. In May, under the Trump Administration, the Department of the Interior began reviewing those same six applications.

Most recently, the National Oceanic and Atmospheric Administration took action on those applications by releasing a proposal by the National Marine Fisheries Service on June 6 outlining the details of the plan as it seeks permits for the use of five seismic air gun surveys that could incidentally harass marine mammals.

The proposal includes measures to minimize harm to marine mammals such as prescribing a standard exclusion zone and, under some circumstances, shutting down the acoustic source so as not to disturb marine mammals. However, many environmental organizations, local governments, and businesses remain opposed to seismic air gun surveys.

Michael Jasny, director of marine mammal protection for the Natural Resources Defense Council, wrote in a blog post that some of the potential negative effects of the surveys could include causing marine animals to abandon their habitats, preventing animals from feeding regularly, obstructing animals’ communication, and injuring and killing fish and invertebrates.

The Endangered Species Act prohibits the “take”–or harassment, harming, pursuit, hunting, shooting, wounding, killing, trapping, capture or collection–of species listed as “endangered” or “threatened. However, a 1982 amendment to the Act allowed for taking that is “incidental to, and not the purpose of, the carrying out of an otherwise lawful activity.”

The proposal in question lists five energy companies’ seismic operations, each spanning a range of days. The shortest operation would be 70 days; the longest, 308. According to the proposal, the seismic operations would generally occur within 200 nautical miles of the coast between Delaware and Cape Canaveral, Florida, with some additional activity up to 350 nautical miles from the shore. The operations would typically occur 24 hours per day.

Jasny called the surveys “an environmentally assaultive activity” that will open the east coast to offshore oil drilling. Over 120 East Coast communities, over 1,200 elected officials, over 41,000 businesses, and over 500,000 fishing families have opposed seismic air gun surveys and/or offshore drilling, according to Oceana.

If the NMFS finds that the taking will have a “negligible impact on the species or stock(s)” and “will not have an unmitigable adverse impact on the availability of the species or stock(s) for subsistence users,” an incidental harassment authorization will be granted. Individuals can comment on the proposal until July 6, exactly 30 days after the date on which the proposal was released, by contacting Jolie Harrision at the NMFS.

Marcus Dieterle
Marcus is an editorial intern at Law Street. He is a rising senior at Towson University where he is double majoring in mass communication (with a concentration in journalism and new media) and political science. When he isn’t in the newsroom, you can probably find him reading on the train, practicing his Portuguese, or eating too much pasta. Contact Marcus at Staff@LawStreetMedia.com.
Share:
Related ItemsAtlantic OceanEndangered Species ActEnvironmentincidental harassment authorizationincidental takeNational Marine Fisheries ServiceNational Oceanic and Atmospheric AdministrationNatural Resources Defense CouncilOceanaseismic air gun surveysTrump