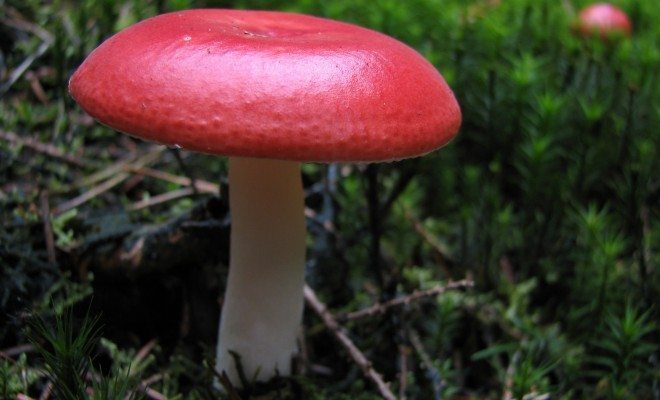 Image courtesy of [Dohduhdah via Wikimedia]

There’s a New Environmentally Conscious Way to be Buried

For the eco-conscious among us, there may be a new way to be environmentally friendly even after death. A company called Coeio has created a unique burial bodysuit from a special strand of mushrooms that decomposes dead bodies. Coeio brings together innovative minds from the design, art, finance, fashion, and funeral industries to rethink the way we approach funerals, and death in general.

What began as co-founder Jae Rhim Lee’s MIT graduate work has become the Infinity Burial Shroud. In a 2011 Ted Talk, Lee explained how she has trained edible mushrooms to eat her own dead fingernails, strands of hair, and skin. She selects all the mushrooms most advanced in eating the excess of her own body to create the infinity mushrooms. She then integrates these infinity mushrooms into a variety of objects, hence the body burial suit.

With America’s population aging at its highest rates, it’s certainly time for us to start thinking about new ways to deal with death. According to the U.S, Census the population aged 65 and older will be at 83.7 million by 2050, mainly due to the large population of baby boomers aging now. However, funerals may not be the most cost efficient option for everyone, nor the most environmentally friendly.

On average burial funerals cost about $6,600; cremations are about half that price on average around $3,200. Cost aside though, people are also weighing the need of the environment into their end-of-life plans. Traditional burial involves the use of formaldehyde-embalming, metal or wood caskets, and concrete vaults all strenuous to the environment in some way shape, or form. Additionally, caskets take up land space. Cremation is considered much more environmentally friendly, but still runs the risk of releasing mercury into the atmosphere as a byproduct of the cremation. With the infinity burial shroud people could still be put to rest in the ground, without the environmental cost or space issue.

At one point or another, we must all come to terms with our immortality. At least for Lee this project has been “…a step toward accepting the fact that someday [she] will die and decay,” and “a step toward taking responsibility for [her] own burden on the planet.”

These suits are as much about conserving the earth as they are about confronting our own end. Dennis White is the company’s first customer. He is 63 and lives in Massachusetts, and until he was diagnosed with a terminal illness, he did not think about his own death. In his wish to be buried in the mushroom suit he expressed satisfaction with the end of his body, as “flora and fauna can dine upon it, just as I have dined upon flora and fauna during my lifetime.” The infinity burial suit can be yours too for $999, and meanwhile, you can rest easy knowing that people are taking steps to help the environment, even after they’ve passed away.

Dorsey Hill
Dorsey is a member of Barnard College’s class of 2016 with a major in Urban Studies and concentration in Political Science. As a native of Chicago and resident of New York City, Dorsey loves to explore the multiple cultural facets of cities. She has a deep interest in social justice issue especially those relevant to urban environments. Contact Dorsey at Staff@LawStreetMedia.com.
Share:
Related ItemsAgingCoeioDeathFuneralsMushroomMushroom Death Suit