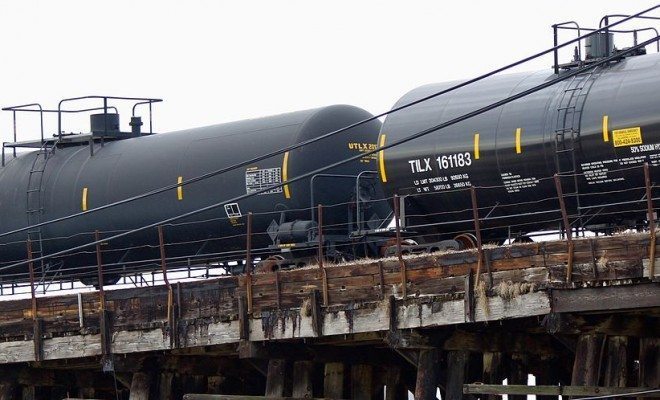 My house rumbles and shakes as the cargo trains thunder down the rail that is less that 500 yards away. Although the necessity of turning up the volume on my TV is not much more than a nuisance, the fact that I sleep within the blast zone of a highly combustible material being transported in an inept and accident-prone manner is highly unnerving. Despite the speed of aircraft or the capacity of cargo ships, railroads remain the most efficient medium for transporting goods. That does not mean, though, that they are a flawless medium. In fact, when dealing with the transportation of crude oil, they and the system on which they operate are horrifically flawed.

Fracking in North Dakota yields a crude oil that is shipped in trains across the country and down the Hudson River. In the New York portion, the rail runs literally right along the river’s edge. The particular form of crude coming from these fields can turn into an explosive fire should the trains derail, giving this transportation system the name “bomb trains”. The American Petroleum Institute disputes this claim, though. The issue is compounded by the fact that it is being transported in outdated cars, called DOT-111s, which have thin hulls and are prone to puncture. In the last several years, oil train derailments have spilled millions of gallons and resulted in deaths, notably in Quebec last year.

Apparently the Transportation Department has been looking into the DOT-111 situation for several years now, but a surge in oil production in the North Dakota Bakken shale region has resulted in an immediate demand for large scale transport. There are not enough pipelines to accommodate this volume, so it is being sent along in trains, dubbed a “virtual pipeline.” Furthermore, the existing oil trains were not originally intended to move this type of oil at this level of intensity, thus the dangers. While safer designs are in the proposal stage, many of the existing cars are too old to be retrofitted with the new features and would have to be replaced all together. This is problematic, Jad Mouawad of The New York Times points out, because the transition period would mean that there are fewer cars on the rails and the oil demands would be difficult to meet.

Also sorely lacking is an emergency response plan. Should a disaster occur, sufficient measures are not currently in place either to mitigate the consequences of a spill or to effectively address the human welfare. Not only would lives be endangered, but a spill would gravely threaten the drinkability of the water for both locals and the eight million residents of New York City, as well as the wellbeing of the river’s biodiversity. In a flash, a spill could undo everything that the Hudson conservation organization Riverkeeper has spent the last half century trying to accomplish.

A bird struggles amidst an oil spill near Crimea, courtesy of Marine Photobank/Igor Golubenkov via Flickr

The lack of safety precautions is not the fault of emergency workers, but the Transportation Authority and oil industries themselves. The latter needs to be more open as to when trains are running through what areas, and what is the nature of their cargo. Last month, Orange County, New York joined neighbors Rockland and Ulster in calling for a full environmental review of the potential impacts of the increased oil shipments, a ban on DOT-111s, and an exploration of alternative means of transporting the oil. Embodying the philosophies of Riverkeeper, these actions criticize the secretive nature of the oil industry and demand the release of data to the public. By empowering the people with information, appropriate measures can be taken.

One town in North Jersey took things a step further, staging a protest and calling for a moratorium on the oil trains until safety standards are met. As previously mentioned, the trains run through my own hometown and neighboring ones in Bergen County, New Jersey pass through a very built up and densely populated region; a disaster in this area would be catastrophic and unquestionably deadly.

One must be cautious when performing a review of potential environmental impacts, as the method can be manipulated so as to be favorable to one party over another. The mayor of Albany recently accused the Department of Environmental Conservation of segmentation, an illegal action under the Environmental Quality Review Act. This process enables the review of a project in individual groups, not as an overall whole. In so doing, environmental impacts can be overlooked or miscast. This has allowed oil companies to enlarge or change their transportation permits time and again without raising any red flags. Ecosystems are large and complex; an issue in one arena will affect, often in an unforeseen manner, aspects of another. Further, humans are tightly intertwined with their surrounding environments. The issue must be looked at in its entirety in order to properly assess the dynamics of the dangers and their potential consequences.

The interrelatedness of people, policy, and environment with regard to this issue extends widely. The overemphasis on oil shipments is creating a backlog in other industries. Millions of dollars are lost and countless jobs are endangered as North Dakota farmers, the longtime mainstay of the economy there, are unable to ship their grain products across the country. A cascade effect follows; food companies are pressured to put out their products in light of delayed shipments, occasionally resulting in lower supply and higher prices. Exportation economics suffer as well, as these rails send grains to the Pacific Northwest to be shipped to Asia, and down the very same routes in New York State to be sent to Europe. In the long run, grain will be a more reliable product than oil. Companies are too short sighted and capitalize on the spike, with wide ranging and ever worsening consequences.

While the increased production, transportation, and use of oil is frustrating enough for those who would rather see progress in the field of renewable energy, the fact that it is compounded by a massive threat to local ecosystems and human welfare is outrageous and unacceptable. This issue is more than a concern over energy policy; it is making the use of fossil fuels an environmental and human threat in manners that go beyond emissions and pollution. The dangers must be effectively addressed, and soon.