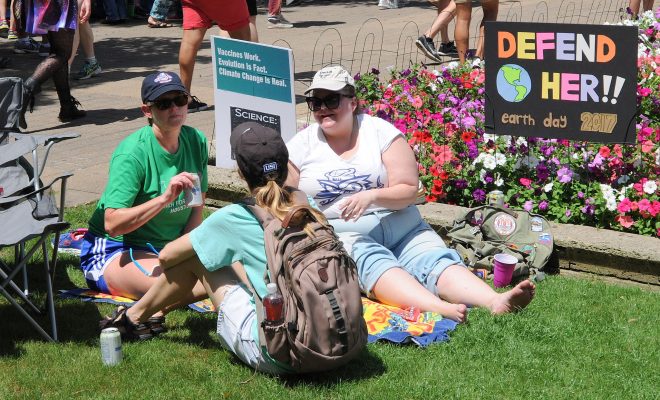 Killer Signs at the March for Science

Yesterday was the March for Science in many cities around the U.S. (and the world). According to the organizers, over 600 cities participated yesterday. The organizers explain the purpose:

People who value science have remained silent for far too long in the face of policies that ignore scientific evidence and endanger both human life and the future of our world. New policies threaten to further restrict scientists’ ability to research and communicate their findings.  We face a possible future where people not only ignore scientific evidence, but seek to eliminate it entirely.  Staying silent is a luxury that we can no longer afford.  We must stand together and support science.

The application of science to policy is not a partisan issue. Anti-science agendas and policies have been advanced by politicians on both sides of the aisle, and they harm everyone — without exception. Science should neither serve special interests nor be rejected based on personal convictions. At its core, science is a tool for seeking answers.  It can and should influence policy and guide our long-term decision-making.

But, as with many of this year's protests, one of the highlights was the awesome signs many protesters came up with. Check out some of the best in the slideshow below:

My favourite sign from the science march (not my pic) pic.twitter.com/g1Q1gSqcbU

Anneliese Mahoney
Anneliese Mahoney is Managing Editor at Law Street and a Connecticut transplant to Washington D.C. She has a Bachelor’s degree in International Affairs from the George Washington University, and a passion for law, politics, and social issues. Contact Anneliese at amahoney@LawStreetMedia.com.
Share:
Related ItemsDonald TrumpMarch for ScienceScienceScientistsTrumpWashington DC