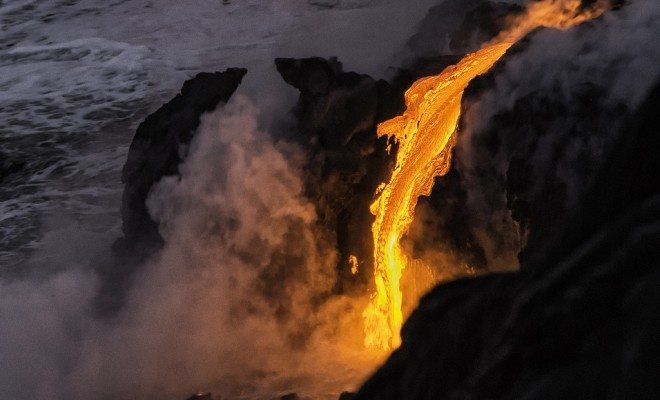 The sky darkened as scalding ash and pumice rained down on the city. In some places, people were trapped in a mixture lacking air and moisture, preserved in time. On the other hand, superheated gases rolled down the mountainside incinerating all organic material in their path. Thousands perished in a matter of a few terrifying hours. Fortunately the scene at the Roman towns of Pompeii and Herculaneum in 79 A.D. does not resemble the situation that residents on the Big Island of Hawaii currently face. Nonetheless, the river of lava emanating from the volcanic Mount Kilauea now threatens nearby homes, particularly in the town of Pahoa.

Kilauea has been erupting nonstop since 1983. While there are a number of active volcanoes across the globe, this is one of the few that is constantly busy. “Active” is a vague term loosely applied to volcanoes that have erupted in the last 10,000 years, or have recently shown signs of life in some form such as seismic activity or emission of gases. A handful of volcanoes have “ongoing” eruptions spanning over a century, being on and off but relatively consistent during that time, but Kilauea is one of only several that falls into the classification of “continuous” eruption.

Residents of the Big Island have lived in the shadow of Kilauea for a long time. In most cases substantial lava flows have meandered south toward the Pacific Ocean and posed no real threat. However over the last two years eruption flows have headed northeast, toward communities. The latest flow, posing problems since June, is moving at 10-15 yards per hour, which is relatively fast. Despite the sense of urgency, there is little panic. Authorities have been making their way through the nearby villages to inform people of the lava’s status. Most residents have places to which they can temporarily relocate, and the need to seek shelter is slim to none. Fortunately, the flow seems to have come to a halt; however residents are still prepared to evacuate because the lava is smoldering and remains dangerous. Furthermore, Kilauea’s active status means that this can resume or occur again at any point in time.

Given the nature of their geography, locals are used to these kinds of situations. The Big Island is not so much an island with a volcano on it, but the whole thing is essentially a series of volcanoes. The Hawaiian Hotspot is a massive breach in the Earth’s crust through which magma has poured for millions of years. The smaller Westernmost islands of Hawaii were once situated directly over this point, forming the islands from cooled lava that eventually sprung vegetation. As the Pacific Plate shifts, they have moved off and slowly eroded while the hotspot composed newer islands such as Molokai, Maui, and the Big Island.

This literally flowing process suggests a smooth gracefulness, prompting much tourism as this calm reaction to the current situation. It is as if to say this is a standard, predictable way of life. However, geologists at the U.S. Geological Survey points out that Kilauea is an explosive volcano. In the past several hundred years it has produced large eruptions including spewing ash columns high into the sky and hurling multi-ton rocks. While there would be tell tale signs that an eruption of this nature is coming, and it seems less and less likely, there is no reason to assume that Kilauea is 100 percent predictable.

Science is not the only factor at play for native Hawaiians when it comes to Kilauea. Many believe that the volcano is the embodiment of Tutu Pele, a Polynesian goddess who is short tempered and possessive of her lands. The ongoing eruptions are her way of trying to reclaim the territory from residents. According to a local, “If she [Pele] feels she needs to clean her house, then let her clean her house.” This statement has been filtered through multiple sources and hence much context has been lost. It is unlikely that the man plans to devoutly stay put and volunteer himself as a sacrifice to the goddess and her wrath of lava, but this sentiment speaks to the interconnectedness of the local culture and the radical environmental situation at play.

The wrath of Pele reminds us that the forces of nature are much more powerful than ourselves; we ought to be careful as to where we build our homes and how we live our lives. Sometimes we must yield as nature runs its own course.

Franklin R. Halprin
Franklin R. Halprin holds an MA in History & Environmental Politics from Rutgers University where he studied human-environmental relationships and settlement patterns in the nineteenth century Southwest. His research focuses on the influences of social and cultural factors on the development of environmental policy. Contact Frank at staff@LawStreetMedia.com.
Share:
Related ItemsGoddessHawaiiKilaueaLavaNaturePeleTourismVolcano