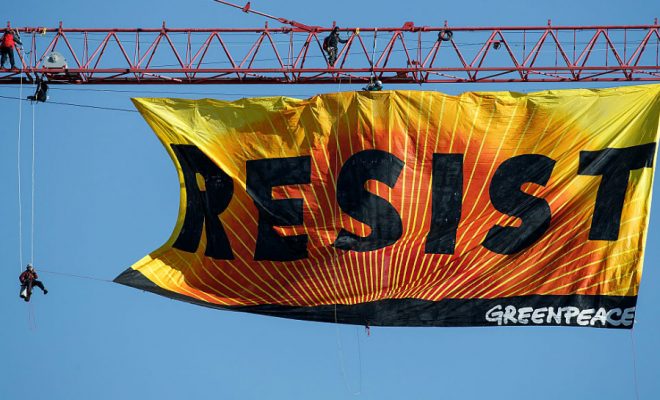 Beyond Symbolic: Greenpeace in the Trump Era

In January, seven members of Greenpeace scaled a 270-foot crane at a construction site near the White House and unfurled a massive banner with the word “resist” printed in block letters. In April, Greenpeace members blocked the entrance to Coca-Cola’s UK headquarters with a 2.5 ton sculpture of a seagull regurgitating plastic and unfurled a banner reading “Stop Dirty Pipeline Deals!” on the center stage of Credit Suisse’s annual shareholder meeting. All of these Greenpeace interventions grabbed headlines but they did not shut down operations of the White House, Coca-Cola, or Credit Suisse. Greenpeace’s banners certainly entertain and uplift, but do they actually have an impact?

While Greenpeace would be nothing without its partnerships with local NGOs, it does have more brand recognition and funding than local organizations. Greenpeace campaigners unrolling banners and installing sculptures gain more publicity than a handful of protesters picketing outside of Coca-Cola headquarters. Images of a Greenpeace demonstration go viral within hours and that kind of power grants the group access to negotiations that smaller organizations never get. Greenpeace negotiators have worked with dozens of major corporations, including Nestlé, Mattel, LEGO, and McDonald’s, to address how the companies can reduce their carbon footprint, protect the environment, and divest from harmful supply chains.

Under the Trump Administration, when sustainability and climate change are treated like myths, businesses will feel no pressure to commit to green practices–unless they are publicly called out and the public is educated about their operations. The Science March and the People’s Climate March were powerful but brief–the true work will be sustaining the outrage and activism that those marches created over a four year period. Greenpeace has the network, the funding and the name recognition to turn individual protests into a larger, more cohesive movement.

Activists can continue to do their work challenging corporations but should also look to the local level as 2018 approaches. If they choose to expand the “market based campaigning” strategy they’ve used against corporations in the past to local and federal governments, they could build powerful local power bases. Imagine Greenpeace banners in town meetings or on the campaign trail during the mid-term elections–the setting for a Greenpeace campaign doesn’t always have to be a corporate meeting and negotiations should not be reserved for corporate sustainability departments.

When Greenpeace was founded in 1971, its first activists leased a fishing boat called the Phyllis Cormack and set sail for Alaska, protesting nuclear testing off of the coast by putting themselves in harm’s way. This ship was stopped by the U.S. Coast Guard and turned back–but several members of the Coast Guard crew signed a letter supporting the protesters’ mission and the media attention the boat drew contributed to ending nuclear testing in Alaska. So, while that first fishing boat could easily have been written off as just another publicity stunt, look what it launched.

Jillian Sequeira
Jillian Sequeira was a member of the College of William and Mary Class of 2016, with a double major in Government and Italian. When she’s not blogging, she’s photographing graffiti around the world and worshiping at the altar of Elon Musk and all things Tesla. Contact Jillian at Staff@LawStreetMedia.com
Share:
Related ItemsActivismClimate ChangeEnvironmentGreen EnergyGreenpeaceProtestResistTrump