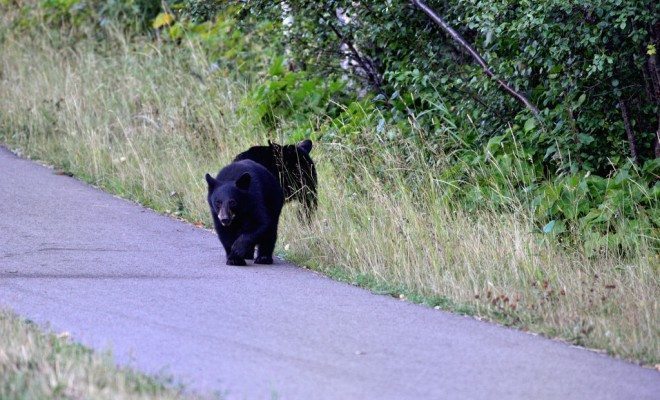 Next Monday begins the week-long tradition of the New Jersey black bear hunt. During this process, between 250-300 bears of a population that tends to dance around a total of 3,400 north of Interstate 80 are “harvested” so as to keep their numbers in check. The reasons for this hunt and the manners in which it is pursued are controversial, and there may exist more progressive and responsible alternatives.

The general argument is that black bear populations can get out of control; they encroach upon our territory and into our backyards, and the likelihood of people experiencing dangerous encounters with them increases. We do not pause to consider that human populations might be the ones getting out of control. Rampant development and overbuilding in the North Jersey area means habitat damage for all manners of local wildlife. As forests are bulldozed, bears’ homes are destroyed. Furthermore, the homes of the animals on which they prey are destroyed as well, meaning that they all must relocate. This concentrates bears into smaller areas, which might produce the illusion that there are more of them while in actuality we simply see them more frequently.

The extensive building does not effectively take into account animal geographies; that is to say, the routes and manners in which they travel, hunt, court and mate, and go about their business. As we build out of control, bears are channeled into ever narrowing corridors or their paths are completely blocked, forcing them to pass through our backyards. We should also keep in mind that leveling wooded areas might put a strain on their food supply; the common image of a black bear sifting through people’s trash might not be a result of overly aggressive and bold bears seeking out human habitat in order to feed, but a last resort to which we have reduced them.

A site of deforestation and habitat destruction. Courtesy of crustmania via Flickr.

The very concept that a large and occasionally predatory animal such as a bear is constantly undergoing a population explosion seems to run contrary to the laws of nature. The food chain is a pyramid; the things on the bottom are the most numerous and as one ascends there are fewer and fewer of those creatures that prey on them. For example, as plants are at the bottom of every food chain, their numbers are astronomical. Then, the small rodents that eat them are naturally less numerous than the plants on which they feed, and the foxes that eat those rodents are fewer still. Bears are very large and, while they feed on roots, berries, and things of that nature as well, there would first have to be population explosions at every level of the food chain below them if their own numbers were to get out of control.

There are two things wrong with this statement. The first, in conjunction with the previous discussion, is that it presumes to take into our own hands the bear population for the sake of the biological carrying capacity of the local environment. It assumes that the exploding bear population will overwhelm the local ecosystem and it is our responsibility to keep it in check. Again, if the population is growing rampantly it is because the ecosystem is flourishing in a manner so as to support it; the bears will not simply increase on their own. Therefore the ecosystem would maintain its balance. If for some reason at a particular point in time the bear population was unusually large, competition for food, shelter, and reproduction would increase and some bears would lose out and die off. Thus the ecosystem would self regulate. That’s the point; these things occur naturally all the time. Humans do not need to step in and play God.

The second problem with the management policy’s statement is that it assumes bear populations are the only factor in measuring the quality of the cultural carrying capacity. It declares that only a certain number of bears is suitable for a healthy carrying capacity; then if their populations get too high things go wrong. Why must this be the determining factor? Instead, if the unlikely situation arises that their populations do rise substantially, why can’t we readdress our own behavior, building policies, and attitudes and interactions with the environments of which we are a part? Why do we absolve ourselves of any responsibility? On the local level, humans aren’t exactly putting checks on their own populations; it is always others who are in the wrong and must get out of the way.

Let’s assume the bear populations are in fact rising. How is this determined? A team uses a DNA sampling technique in order to estimate the number of actively breeding bears in the region. Based on this, the total number is subsequently calculated. This method is supposedly more accurate than the more traditional catch, tag, and release systems. Be that as it may, does the hunt account for this delicate dynamic or do we shoot indiscriminately? What if, say, 80 percent of the bears killed during a particular hunt are active breeders? This could potentially devastate the bear population. It is not simply a matter of how many bears should or should not be killed, but which ones and where.

Rather than turn to black bears as scape goats, we should admit that we are causing habitat destruction and environmental damage. The validity of the black bear management policy has been questioned in the past, but to no avail. On the basis of not just science and policy but inward social reflection and questions of human behavior and value systems, it is time to challenge it again.