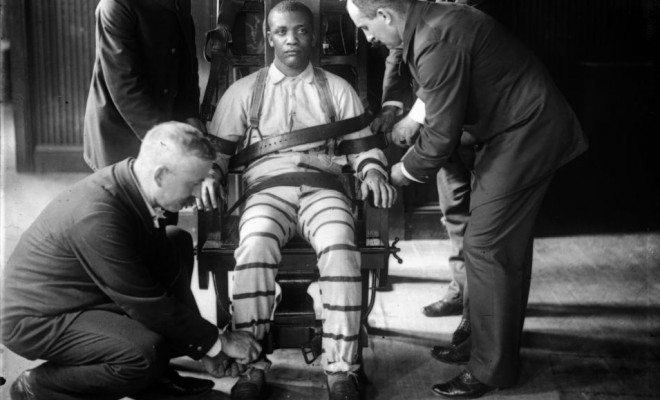 My most recent assignment at my current think-tank internship was to write a report on the 2008 book,The Execution of Willie Francis: Race, Murder, and the Search for Justice in the American South. In it, journalist Gilbert King told the story of Willie Francis, an African-American teenager who was convicted of the murder of a Caucasian man in the small Louisiana town of St. Martinville and survived a botched execution attempt in 1946. The book recounts the dark history of race relations in southern Louisiana, the murky circumstances surrounding the murder of popular local pharmacist Andrew Thomas, and the gross travesty of justice that was Willie Francis’ trial (particularly his lawyers’ refusal to provide him with any real defense). After Francis was scheduled for a second date with the electric chair, an idealistic local Cajun lawyer and a crusading Creole civil rights attorney intervened to try to save him. In the end, the Supreme Court affirmed his sentence, and the boy was finally put to death in 1947.

Frankly—and sadly—I found the most sensationally sordid aspects of the Willie Francis tragedy, namely the ugly racism and nauseatingly biased criminal justice system of mid-twentieth century America, to be old time religion. As an African descendant myself, I’ve been spurred by both upbringing and personal interest to familiarize myself with Black history in the United States and worldwide. Nothing about Francis’ treatment at the hands of the courts surprised me. As a student of the law, however, I was most struck by the middle section of the book, which detailed the backgrounds and deliberations of the Supreme Court Justices who ultimately put Willie Francis back on the path to his demise. What really seized my attention was the lamentable fact that when Willie’s case—Louisiana ex rel. Francis v. Resweber—reached the Court, the nation’s highest tribunal had not yet seen fit to “incorporate” the fundamental constitutional freedoms entrenched in the Bill of Rights against state and governments.

The law graduates among you will remember “incorporation” as the process by which courts have ruled that portions of the Bill of Rights constrain the states as well as the federal government. If this development has been a “process” rather than an obvious tenet of American constitutional law from the beginning, it is because the Framers drafted the Constitution with a view to limiting the power of the federal government, not the states. (Mind you, the Framers didn’t make this especially clear in the text of the Bill of Rights. Of all the pre-Civil War individual-rights Amendments, only the First explicitly targets Congress.) Yet the bloodshed of the Civil War and the intransigence of the former Confederate states in resisting equality for the freed slaves revealed the need for limits to the state governments’ powers as well.

One might think that the Fourteenth Amendment’s ringing declaration that “No State shall make or enforce any law which shall abridge the privileges or immunities of citizens of the United States” would have addressed this problem adequately. Alas, one would be mistaken. The Supreme Court’s 1873 decision in the Slaughterhouse Cases held that the above-mentioned Privileges or Immunities Clause of the Fourteenth Amendment applied only to the rights of U.S. citizenship and not of citizenship in particular states. This effectively foreclosed the use of the Clause to prevent state and local governments from riding roughshod over fundamental individual constitutional rights, right up to the present day. (Notably, Justice Hugo Black argued in 1947’s Adamson v. California that since the Slaughtehouse Cases addressed the unenumerated right to economic liberty, the cause of incorporating textually enumerated rights through the P-or-I Clause actually could have survived Slaughterhouse.) Although, as Yale law professor Akhil Reed Amar has written, “Virtually no serious modern scholar—left, right, and center—thinks that [Slaughter-House] is a plausible reading of the [Fourteenth] Amendment,” the Supreme Court has never mustered the gumption to overturn this misbegotten precedent.

Some may dismiss this nicety as negligible, especially since the Supreme Court did eventually get around to incorporating most of the Bill of Rights through other, due process-based means. The story of Willie Francis suggests otherwise. As author Gilbert King writes, “Not once, not twice, but many times, the U.S. Supreme Court had held that the Bill of Rights did not apply to states. Thus, most of the rights in the first ten amendments to the Constitution, rights citizens decades later would take for granted, simply did not exist for litigants in a case originating at the state level—cases like Willlie’s. In other words, one’s right not to be tried twice for the same crime, for instance, could only be invoked if one was being tried in a federal court.”

So when Willie Francis’ lawyers prepared to argue his case before the Supreme Court, they had to face the daunting prospect of urging the Court to reconsider and overturn its previous rulings—rarely a promising strategy. The legal deck, then, was heavily stacked against the hapless youth from the beginning. Had the Court not stood the Fourteenth Amendment on its head a mere five years after its ratification—even in the face of statements from Congressman John Bingham, its principal framer, to the effect that it did incorporate the first eight Amendments to the states—Willie might have stood a real chance. Yet thanks to the obstinacy of the Slaughterhouse Court and the cravenness of succeeding generations of Justices, Willie Francis and countless others like him were subjected to grotesque miscarriages of due process—and suffered the ultimate injustice as a result.

When I was still but a lowly law student, I diligently read the online evaluation feedback for every course I contemplated taking before enrolling in it. I remember reading one evaluation from a student who opined that all constitutional law courses should be elective. The Execution of Willie Francis has reminded me why I have always held such attitudes in the utmost contempt—and why I carry a pocket copy of the U.S. Constitution with me in my bag daily. No matter what field of legal practice one wishes to take up, constitutional issues—including seemingly arcane matters of constitutional interpretation—affect all of us as citizens of a democratic society. It’s not only a matter of right and wrong, or of justice and injustice; sometimes it’s a matter of life and death.

Akil Alleyne
Akil Alleyne, a native of Montreal, is a graduate of Princeton University and the Benjamin N. Cardozo School of Law. His major areas of study are constitutional and international law, with focus on federalism, foreign policy, separation of powers and property rights. Akil is also a member of Young Voices Advocates, which connects students and young professionals with media outlets worldwide to facilitate youth participation in political and social discourse. Contact Akil at Staff@LawStreetMedia.com
Share:
Related ItemsCivil LibertiesDiscriminationRacismSCOTUSSupreme CourtTrial