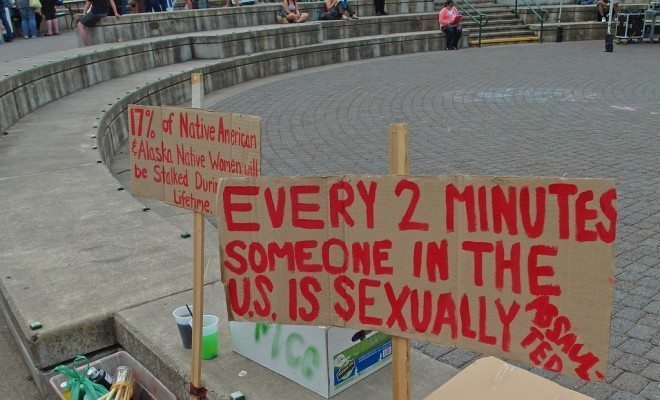 Sexual assault on college campuses has been one of the hottest topics for a couple years now. Many universities are being investigated by the Department of Education for Title IX violations. The recent Rolling Stone article about rape on the campus of the University of Virginia that was partially retracted and has landed the publication in hot water over concerns about its journalistic ethics has seriously reignited the discussion. There are a lot of moving parts to the debate about sexual assault on college campuses, and I think that one of the many, many reasons that the conversation gets so easily muddied is that we don’t all agree on definitions, or statistics.

While this is obviously an extreme example, watch this video of “Princeton Mom” Susan Patton who I’m still a little bit sure must be running the world’s longest satirical performance. She begins the video by talking about how rape is no longer just defined as a woman being held at gunpoint and assaulted, and then spends the next ten minutes pretty much going on about what a shame that is. She also thinks that rape is often women falsely accusing men after “regrettable sex.” Then she talks about how it’s women’s responsibility to protect themselves from rape by not drinking, making good decisions, and choosing better friends. It’s a charming exercise in a game I like to subject myself to called “Holy Shit, People Actually Think This Way.”

Now the Department of Justice (DOJ) has weighed in with statistics from a study it conducted, and it’s probably going to all get even more confusing.

The new DOJ report dealt with not just college students, but college-aged females more generally. The DOJ report included the statistic that six of every 1,000 college females are sexually assaulted, and now everyone who thinks like Patton is using it to prove that sexual assault on college campuses isn’t a thing we should be worried about, and that this talk of “rape-culture” is overblown.

First, what we need to do is remember that anytime this sort of study is undertaken–one that relies on people’s word, memories, and stories, rather than say, hard facts in a laboratory–is that it needs to be taken with a grain of salt.

There have been other studies that indicate that the rate of college sexual assault is much higher than what the DOJ reports. A survey at the Massachusetts Institute of Technology (MIT) concluded that 17 percent of female students and 5 percent of young men were sexually assaulted as students. Then there’s the Campus Sexual Assault Study from 2007 that gave us the now-infamous and oft-cited “one in five” statistic.

There are a few reasons why two studies can have such radically different numbers, and they’re excellently detailed here, by the Marshall Project. The main takeaway is this though: neither is necessarily right and neither is necessarily wrong. They asked different questions, they talked to different people, and at the end of the day, it’s really very much an inexact science. We’re not sure how many students are sexually assaulted; more studies to come might help us pinpoint that number, but probably not.

But we do know that at least some are. Furthermore, the same DOJ report stated that eighty percent of students sexually assaulted don’t report it. And 80 percent were assaulted by someone they know. Both of those statistics are deeply troubling.

No matter how many people are being assaulted on our college campuses–whether it’s one percent, twenty percent, or somewhere in between–it’s too many.

But that “less than one” percent is probably going to get thrown around for a while. Because, unfortunately, there are a lot of people out there who, for whatever reason, don’t want to see change. They just got some ammunition, for now.

Anneliese Mahoney
Anneliese Mahoney is Managing Editor at Law Street and a Connecticut transplant to Washington D.C. She has a Bachelor’s degree in International Affairs from the George Washington University, and a passion for law, politics, and social issues. Contact Anneliese at amahoney@LawStreetMedia.com.
Share:
Related ItemsCollegeCollege CampusDepartment of JusticeDOJPrinceton MomRapeRape ApologistsRape CultureSexual AssaultStatisticsStudyUniversity of Virginia