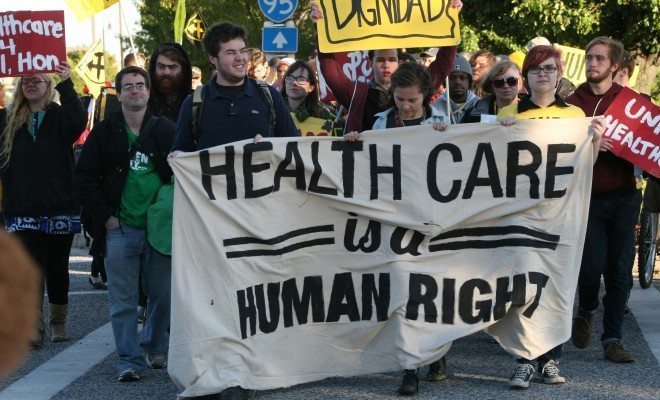 I’m going to take a break from feminist issues today and discuss something that is, literally, life or death: America’s horrible healthcare costs.

Recently, just as I had my first run-in with military dress codes, I also got to experience a military doctor’s office. I went in for a physical exam, waited maybe ten minutes all around, and ended up leaving without having to pay a cent for the appointment or prescriptions. The only thought on my mind was: why can’t everyone’s health care be this great?

Outside of the United States, healthcare is that great in several countries. Just last summer while studying abroad in London, my friend rushed herself to the hospital thinking her appendix was bursting. Turned out to be just a pulled muscle, but an ER visit didn’t cost her a pence — and she wasn’t even a citizen!

So what’s wrong with American health care? For a country whose citizens claim it to be number one, we are way behind on things that really matter. According to the World Health Organization, America ranks thirty-fifth in life expectancy and thirty-seventh in healthcare systems.

Why are we so low in the rankings? The answer is not simple.

American healthcare costs are alarmingly higher than in other developed countries. An MRI in the U.S. averages $1,121, while in the Netherlands it’s only $319. Need an angiogram? That’ll be $914, but you could have gotten it for $35 in Canada! Are you on the drug Lipitor? Then you know it’s around $124 a month — it costs $6 a month in New Zealand. Some may argue that we are wealthier than these countries, so it makes sense that we would spend a bit more. Sure, but the amount the United States spends on health care is way above what it should be.

Some blame insurance. American citizens not having health insurance was a factor in rising healthcare costs, yes. Those who didn’t have it still needed care, then went bankrupt from trying to pay for it, so our tax money ended up paying for it. The Affordable Care Act has alleviated some of the problem, but it is still being fought over in congress.

None of these issues is the one thing that has skyrocketed our health care spending. In fact, all of them are to blame. Therefore, there will be no simple solution. Reaching a fix is made harder by the fact that the topic of health care is gridlocked in our government. Republicans block Democrats because they’re not Republican, and vice versa.

A lot of people like to gripe about Obamacare.

Half of Congress even decided to throw a hissy fit over not getting their way on the subject, and shut down the government. Sure, the Affordable Care Act might not be perfect, but at least it’s something. Those people most vehemently opposing it aren’t offering up any better solutions. Until both parties can get over their pride, sit down and say “what is going to be best, and cost less, for the American people?” healthcare costs will continue to be higher than they need to be.

My opinion? Healthcare should be free and easily accessible for everyone. Period.

Data and statistics for this post came from the WHO website and this article from The New York Times.

Morgan McMurray
Morgan McMurray is an editor and gender equality blogger based in Seattle, Washington. A 2013 graduate of Iowa State University, she has a Bachelor of Arts in English, Journalism, and International Studies. She spends her free time writing, reading, teaching dance classes, and binge-watching Netflix. Contact Morgan at staff@LawStreetMedia.com.
Share:
Related ItemsCongressEconomyHealth InsuranceHealthcareHealthcare CostsInsuranceObamaObamacarePartisan PoliticsPoliticsRepublicansTaxes