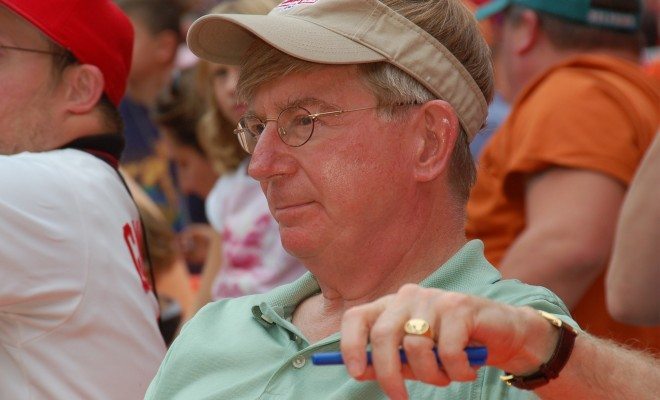 I’m not a violent person. Some may even say I’m compassionate. But if I were to witness the defenestration of George Will, I cannot deny that I would crack a smile.

What has caused such a drastic shift in my nature? Well, the columnist recently published an article in the Washington Post spewing his opinion that colleges and universities “make victimhood a coveted status that confers privileges.”

Let’s let that sink in. A Pulitzer Prize winner, Princeton educated, syndicated columnist has stated that being a victim of sexual assault is a privilege. When my eyes were first subjected to that sentence my body went into shock, as I was not sure if I should shriek, gag, or faint from the ignorance. Perhaps the Fox News Kool-Aid is stronger than previously suspected, but this is new realm of revolting that I didn’t think possible.

One of Will’s arguments against the “supposed campus epidemic of rape” is the statistic of women who will be sexually assaulted while in college: 1 in 5. Although the government, nonprofits, and research institutions support the statistics he attempts to discredit, the evidence is still not enough for good ol’ George. Dr. Jen Gunter broke down (accurately this time) the “pesky arithmetic” Will complained about. I recommend that Will and all those who agree with his assessment give it a thorough read.

Schools are more frequently including trigger warnings at the beginning of lectures and assigned readings in an effort to alert people who may self-harm or have their post-traumatic disorder triggered by exposure to controversial readings and assignments. Will scoffed at this concept, belittling individuals who would benefit from the notices. The mocking of trigger warnings was the garnish atop a cocktail already soiled with hebenon.

Four Senators sent a letter to Will challenging his position on the issue of sexual assault. He issued a rebuttal, including this nonsensical gem:

“I think I take sexual assault much more seriously than you do.”

Really? Is he truly going to claim that he takes assault more seriously than four Senators who have dedicated their careers to helping victims; not downplaying the trauma they have endured like he has done?

As an Ivy-educated, affluent white male in America it may be fair to deduce that George Will hasn’t faced too many incidents of sexism or racism throughout his experiences — but that is neither my place nor anyone else’s to presume. Just as I do not know his personal history, he is not aware of the thousands of victim’s experiences he was so quick to demean.

Although offensive and infuriating to read, his column serves as an example of the beliefs surrounding sexual assault that continue to plague our society even when there is evidence to refute them. If any good has come from his piece, it is that the backward way of how victims are viewed is being thrust into public conversation.

I am not the first to voice my disdain for Will’s column, and likely not the last. Just last night the St. Louis Post-Dispatch dropped him due to his comments. Everywhere he turns he should be saturated with vehement rebuttals exposing the callousness of his article.

Alex Hill is a student at Virginia Tech majoring in English and Political Science. A native of the Washington, D.C. area, she blames her incessant need to debate and write about politics on her proximity to the nation’s capital. Contact Alex at staff@LawStreetMedia.com.

Alex Hill
Alex Hill studied at Virginia Tech majoring in English and Political Science. A native of the Washington, D.C. area, she blames her incessant need to debate and write about politics on her proximity to the nation’s capital.
Share:
Related ItemsCollegeGeorge WillRapeSenator BaldwinSenator BlumenthalSenator CaseySenator FeinsteinSexual AssaultTrigger WarningUniversitiesWashington Post