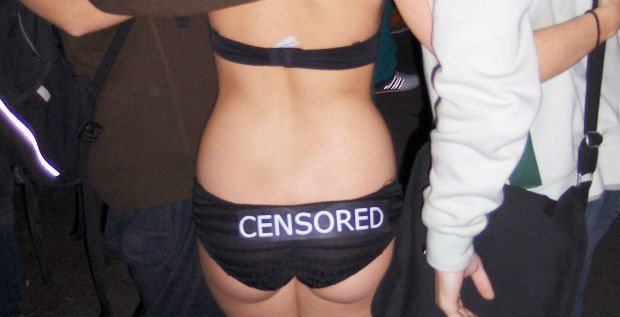 Dating Naked Contestant Sues for Being Shown Naked While Dating

Jessie Nizewitz, a 28-year-old model from New York, filed suit for $10 million this week against VH1, parent company Viacom, and two production companies for failing to blur out her crotch during a beach wrestling scene. (Yes, you read that correctly: naked beach wrestling on a first date being filmed for a reality TV show. That’s some serious other-level confidence.) Take a look at the Today Show’s clip below if you’re unfamiliar with the show, though I’m betting it’s exactly what you’re imagining in your head already.

Visit NBCNews.com for breaking news, world news, and news about the economy

Now in all honesty, I kind of love this show. My friend and I discovered it a few weeks ago while watching The Soup, and subsequently binge watched all the episodes available On Demand (sadly there were only three at the time). If you haven’t seen it, or are sticking to the story that you would never watch such base programming, let me fill you in: contestants are flown to a private island where they bare their souls and birthday suits to strangers while participating in decidedly unromantic activities (naked four wheeling, anyone?) all in the hope that they will find that special someone.

According to Nizewitz, the show’s producers verbally promised that only contestants’ butts would be shown, with all other good stuff blurred out. There’s no mention of this assurance in a written contract, but that of course wouldn’t negate its validity depending on location. In an interview with the New York Post, Nizewitz expressed disappointment that a man she’d been seeing for a month disappeared after the episode aired: “He was employed, Jewish, in his 30s and that’s pretty much ideal.”

Setting aside the obvious here that Nizewitz was participating in a television show built entirely around being naked, it does seem that she had a reasonable expectation that her body would be blurred for broadcast. A $10 million expectation? We’ll find out soon enough. Until then, I’m still tuning in to this bizarre and uncomfortable social experiment. Because honestly, who doesn’t enjoy watching nascent relationships bud over naked tumbling, basket weaving, and Zumba classes?