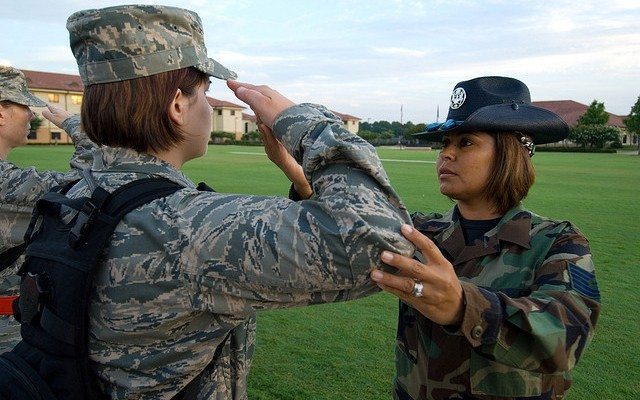 So, this Monday was Veterans Day. For those of you who don’t really know what that means—other than a day off from school or work—Veterans Day is a day set aside to honor all of the brave men and women who served in the United States Armed Forces.

So, that grandfather you have who served in World War II? Your uncle who fought in Vietnam? Give them a hug today.

But you know who else deserves some extra appreciation today? Your aunt who did two tours in Afghanistan.

These days, the face of Veterans Day is seriously changing—and for the better. With the ban on women in combat positions lifted last January, more and more women are getting the recognition they deserve for their military service.

Because guess what, lovelies? Women were serving in combat positions long before the ban was lifted almost a year ago.

Captain Vernice Armour is a perfect example. In August of 2004, she was flying an AH-1W Super Cobra attack helicopter for the 11th Marine Expeditionary Unit in Iraq. One of the missiles she fired saved an entire squad of Marines, one of whom she met by coincidence later. He thanked her for saving his life.

The first black woman to serve as a combat pilot. Such a bad ass! Courtesy of GS Kansas Heartland via Flickr.

Captain Armour is just one of thousands of women who have served in military combat positions. But while their participation was technically banned, they didn’t have access to the same honors and benefits as their male counterparts.

The approximately 200,000 positions officially deemed as “combat” offer higher pay and more opportunities for promotion. With women categorically shut out of those roles, the chances of rising up through the ranks of power—or the pay grade—were slim to none. But since that ban has been lifted, more opportunities are opening up for women soldiers.

And that’s fantastic for a whole bunch of reasons! Let’s get into those, shall we?

Alright! First of all, giving women official access to combat positions means that they’ll receive credit for the dangerous work they’re doing. Under the ban, while women were shut out of these jobs on paper, there were still plenty of them doing the work in real life.

But, since it was technically illegal, many of them were doing it without recognition. That’s just not OK, am I right? If you’re running the same risk of getting blown up as the guy next to you, you deserve to be honored on the same level when you get home.

But credit is just the beginning. Letting women into combat has the potential to change military culture as we know it, and that’s a huge deal.

Currently, the rate of sexual assault in the military is outrageous. The documentary The Invisible War points out that women soldiers are more likely to be raped by one of their comrades than they are to be killed by enemy fire.

So, women in the military are statistically safer with the enemy than they are with their own fellow soldiers. That is totally unacceptable. And we haven’t even looked at incidents of male-on-male rape within the military.

Sadly, male soldiers—of all nationalities—are often encouraged to engage in sexual warfare, creating an oppressive rape culture. It’s a strategy that doesn’t stop at killing the enemy. It goes on to violate it, emasculate it, and destroy its very soul. It’s a depressingly effective way to win wars, when used in conjunction with the technology of combat.

Don’t believe me? Read Grace Cho’s Haunting the Korean Diaspora: Shame, Secrecy, and the Forgotten War. In it, she tells the story of the mass rapes that occurred in Korea at the hands of multiple invading armies, the U.S. being just one of them. These massacres gave rise to the booming prostitution economy that surrounds any foreign military base—where war ravaged women turn to support themselves and their children. Cho’s mother was one of those women. Her father was, likely, a kindly client.

But why is this rape culture so prevalent among military men? With women largely excluded for many generations, the armed forces have had the room to grow into a hypermasculine, old boys’ club.

The military has made itself into a place where men can gather to be their most savagely masculine—to revel in the knowledge that they have the brawn, they have the power, and they will stop at nothing to prove their superiority.

Allowing women to enter this space has the potential to change all that.

As more women gain access to the pathways that lead to military promotion, the more women will ultimately occupy high-ranking leadership roles. With women increasingly ruling the roost, the gendered power dynamics of the whole organization can start to transform.

Perhaps more GI rape victims will report their attacks, feeling more comfortable confiding in a female superior. Maybe those superiors will be less inclined to sweep sexual assaults between soldiers under the rug. And maybe with the threat of real consequences, rates of sexual assault will ultimately decline.

Maybe female generals will discourage soldiers from engaging in sexual warfare. Maybe they won’t be as keen to turn a blind eye when it does occur.

But most importantly, maybe having some women in charge will change this sexist idea that men have the power. That men are the protectors. That men call the shots.

Because, as more male soldiers report to female commanders, their views about women will have to start changing.

The old boys mentality that women are frail, hysterical baby-makers, whose uteruses must be protected at all cost, will start to crack. The presence of female military officials will force male soldiers to view women in a new light—less as passive, walking wombs, and more as intelligent, powerful individuals, with skills and smarts capable of outpacing their own.

So this Veterans Day—the first one we’ll celebrate without the ban on women in combat—give some extra love to all the women soldiers out there. They’re an underappreciated lot.

Featured image courtesy of [US Air Force via Flickr]

Hannah R. Winsten
Hannah R. Winsten is a freelance copywriter, marketing consultant, and blogger living in New York’s sixth borough. She hates tweeting but does it anyway. She aspires to be the next Rachel Maddow. Contact Hannah at staff@LawStreetMedia.com.
Share:
Related ItemsCombatMilitaryRapeSexismSoldiersVeterans DayViolenceWarWomenWomen's Rights