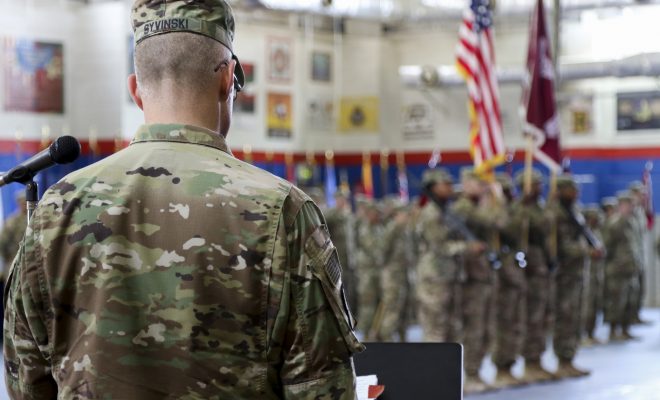 Soldiers Discharged for Misconduct Often Suffer from PTSD, Other Disorders

As many as three-fifths of soldiers that are discharged for misconduct actually have post-traumatic stress disorder or other types of brain injuries, according to a new report from the Government Accountability Office.

The report confirms a suspicion that has been talked about for a long time. “It is everything many of us believed for years,” said Iraq veteran Kristopher Goldsmith, who is an assistant director at Vietnam Veterans of America. “Now I hope Congress will direct the resources to making it right.”

The report showed that 62 percent of all service members who were discharged for misconduct between 2011 and 2015 had been diagnosed with PTSD, a traumatic brain injury (TBI), or other conditions that can cause similar behavior. That totals over 57,000 soldiers. Out of the 57,000, 16 percent had PTSD or TBI.

The majority of the rest had adjustment and alcohol-related disorders. Those include depression, anxiety, personality disorders, different kinds of substance addictions, or bipolar disorder. Twenty-three percent of the soldiers discharged got an “other than honorable” discharge. This means they are, in most cases, not eligible for any military health care, disability pensions, or other benefits.

GAO Reports that 62% of Soldiers Separated for Misconduct Have PTSD or Other Disorders https://t.co/nwaqKoHH1A pic.twitter.com/5jFIvizWw5

The military has long been criticized for not doing enough to help its veterans. Now experts are also criticizing President Donald Trump’s new health care bill; it passed the House earlier this month. The new bill categorizes PTSD as a pre-existing condition, which could make health insurance inaccessible to millions of veterans.

Given that Trump campaigned on the promise to do more for veterans, a lot of people slammed the new bill. Illinois Senator Tammy Duckworth lost her legs while serving in the Iraq war. She called the health care bill “stunning” for making it harder for veterans to get access to health care.

After speculations first broke that soldiers suffering from PTSD or TBI were frequently discharged, the military introduced regulations, screening soldiers to detect any such diseases before punishing them. But the GAO report showed that this rarely happened. And no one monitored the new regulations to check for compliance.

“Before, we were speculating. Now we have hard numbers to prove there are this vast numbers of combat veterans affected,” said Representative Mike Coffman, a Republican from Colorado and an Iraq War veteran. He said he believes that people want to do something about the problem, but that there has been a lack of understanding. Hopefully, this new information will lead to some change.

Emma Von Zeipel
Emma Von Zeipel is a staff writer at Law Street Media. She is originally from one of the islands of Stockholm, Sweden. After working for Democratic Voice of Burma in Thailand, she ended up in New York City. She has a BA in journalism from Stockholm University and is passionate about human rights, good books, horses, and European chocolate. Contact Emma at EVonZeipel@LawStreetMedia.com.
Share:
Related ItemsArmyDischargedMental DisabilityMilitaryPTSDSoldiersTBI