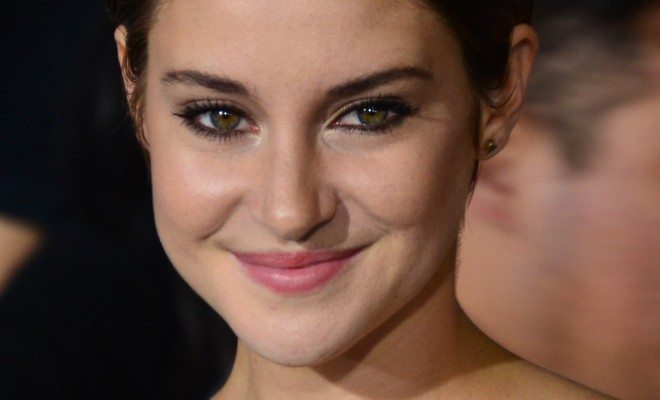 An Open Letter to Shailene Woodley: What Every Not-a-Feminist Needs to Hear

Folks, how many of you are John Green fans? I hope every single one of you raised your hand. He’s basically perfection.

Not only does he write awesome books, but he also posts weekly vlogs on YouTube with his brother, Hank. The two of them cover everything from goofy details about their daily lives to politics and religion. And they do it HYSTERICALLY. Seriously, I never knew I could be so entertained while watching a video about the American healthcare system.

Anyway! One of John Green’s wonderful books, The Fault in Our Stars, has been made into a feature film. It’s hitting theaters next month and stars Shailene Woodley.

So much gorgeousness is happening here, you guys.

Shailene is pretty awesome, making some queer-ish, feminist-y comments about love being independent from gender, doubting our society’s obsession with marriage and monogamy, coming down on Twilight for promoting an unhealthy and abusive relationship dynamic, and advocating for more nuanced, kickass roles for women in movies.

But! Shailene was recently asked if she identifies as a feminist. And she said no. Cue collective exasperated sigh of disappointment.

Why is this apparently feminist star eschewing the feminist label? Because, it seems, she doesn’t actually understand what being a feminist means.

“No,” said Woodley, when asked if she considered herself a feminist, “because I love men.” She went on to say that feminism means giving undue power to women at the expense of men, an arrangement that wouldn’t be beneficial to anyone.

But, see, that’s not what feminism is. That’s not what it means. Not even a little bit. Feminists aren’t power hungry man-haters looking to depose men from their porcelain thrones of fragile masculinity. We’re not looking to climb over the men, flip the oppression coin, and unfairly win some sort of gender pissing contest where vagina-bearers come out on top.

Feminists are people who come in all shapes, sizes, and genders — some of them are men, go figure! — who believe in the social, political, and economic equality of the sexes. Just ask Chimamanda Ngozi Adichie, the TEDx talker who came up with this perfectly coined definition of feminism. This isn’t power grabbing. This isn’t renewed, rearranged sexism.

Feminism is a commitment to ending gender-based oppression. And that’s something that both men and women will benefit from.

Because, let’s be real. We live in a world where gender-based oppression is a huge fucking deal. There’s so much of it, in fact, that every week I’m swamped with potential stories to cover here on The F Word. My email inbox is consistently flooded with article recommendations from friends, family members, and coworkers, all alerting me to the latest crazy incident of racist, sexist, homophobic bullshit to hit the airwaves. There’s always too much to cover on any given day.

This week, for example, we’ve got Monica Lewinsky. Vanity Fair has debuted an exclusive essay by Lewinsky, breaking her decade-long silence regarding her past as the White House whore. “It’s time to burn the beret and bury the blue dress,” she writes, going on to express her deep regret and remorse for her affair with former President Bill Clinton — which, she insists, was totally consensual.

But does consent really exist between an intern in her early 20s and her boss — a man who’s not only twice her age, but who’s also the President of the United States? The leader of the motherfucking free world asks you for a blow job, and what do you do? Report him to human resources?

I feel like the U.S. military’s Commander in Chief probably pulls rank on that one, no?

Yes, yes he does.

We live in a world where the man who abused his position of power to score sex from a hot, 20-something staffer, is now getting paid millions of dollars in speaking engagements. Meanwhile, his well-educated, exceptionally capable whore has been unable to land a full-time job ever, AT ALL, because of her “history,” a media sensation that’s transformed her from a person into a joke.

This is a world that needs feminism.

Then, we’ve got Emily Letts, an abortion counselor at a clinic in New Jersey who filmed her surgical abortion and posted it online, to show other women that “there is such a thing as a positive abortion story.”

The short video, featured below, is not graphic or violent, shows only the top half of Letts’ body, and focuses on her emotional and physical experience during the procedure. As a counselor, Letts wanted to share her experience to diffuse some of the frightening misinformation surrounding abortions, modeling one possible solution to a very personal, complicated situation.

Letts’ video and her accompanying essay for Cosmopolitan are helping women across the country come to safe, informed decisions about how to handle an unexpected pregnancy. They’re also helping to chip away at the deeply ingrained stigma our country holds against women who take control of their bodies and reproductive systems.

We live in a world where those are two goals that cause a huge chunk of the United States to respond with anger and vitriol, calling Letts a Godless Baby Slaughterer Witch from Hell. I give it about five minutes before death threats start rolling in.

This is a world that needs feminism.

And then, we’ve got 300 girls in the Nigerian village of Chibok who were abducted from school, OF ALL PLACES, and are now being sold into sexual, marital slavery for a few dollars a pop by Boko Haram, an Islamist fundamentalist group.

These girls, who range in age from 9 to 15 years old, haven’t been found, which is SHOCKING considering how little media or political attention their abductions have warranted. (Please re-read that sentence and multiply the sarcasm factor by infinity.) And why were they abducted? Because Boko Haram is opposed to women in Nigeria receiving Western educations.

That’s right, folks. We live in a world where girls are violently denied educations and sold into slavery — all while making fewer headlines than Kimye.

This world needs feminism so badly that I have to come up with creative ways to squeeze multiple stories into a single blog post — and I never manage to cover them all. It needs feminism so badly that I had an entire post written about this racist, sexist,  douchebag extraordinaire from Princeton who’s not apologizing for his white privilege, and I SCRAPPED it, because there were too many other stories that were even more important to cover this week.

So, to Shailene Woodley, and to all the other people in the world who are hesitant or unwilling to adopt the feminist identity, please listen.

Feminism is empathy. Feminism is self-love, and love for your fellow human beings. Feminism is working to end the oppression of all people — men, women, queers, people of color, poor people, disabled people — so that all of us can live happier, healthier lives.

And sadly, this column is proof that there aren’t enough of us.

So, please, get next to feminism. Feminists are changing the world for the better. And we need you.

Hannah R. Winsten (@HannahRWinsten) is a freelance copywriter, marketing consultant, and blogger living in New York City. She hates tweeting but does it anyway. She aspires to be the next Rachel Maddow.

Hannah R. Winsten
Hannah R. Winsten is a freelance copywriter, marketing consultant, and blogger living in New York’s sixth borough. She hates tweeting but does it anyway. She aspires to be the next Rachel Maddow. Contact Hannah at staff@LawStreetMedia.com.
Share:
Related ItemsAbortionBill ClintonBoko HaramFeminismFeministHuman RightsJohn GreenKimyeLGBTMonica LewinskyNigeriaOppressionQueerRacismSexismShailene WoodleyThe Fault in Our StarsWomenWomen's Rights