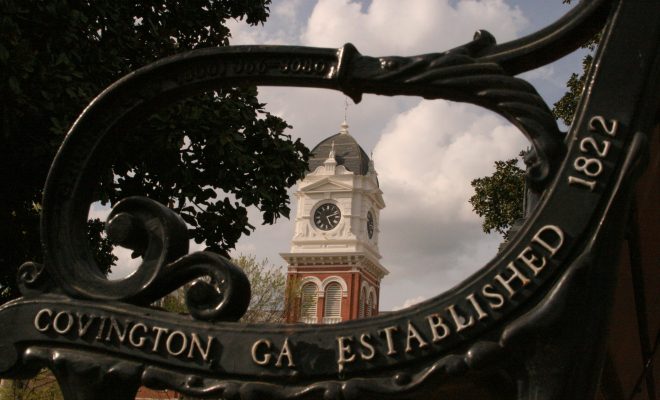 Newton County, Georgia, which bills itself as a center of southern small town charm, is now the site of an ugly dispute over land use as the local Muslim community struggles to build a Muslim mosque and cemetery.

Over the course of several years, the imam Mohammad Islam has built a congregation that now seeks to build a mosque and cemetery on a plot of land in Newton County, purchased by Islam in 2015. He made his plans clear, officially purchased the land, and was ready to build upon the site–until local backlash derailed what should have been a perfectly straightforward construction project. The plans to build the mosque, cemetery, and other affiliated buildings came under fire because they would have been approved without public comment, and an outpouring of protest from the community bolstered by social media led the Board of Commissioners to place a five week moratorium on the construction or the submission of plans for construction of any new religious structures. After the moratorium ends, the Board members will vote on whether or not they will change the zoning rules for religious structures. Ostensibly new zoning would impact any religious building, but thanks to the “Stop the Mosque” campaign and the mass turnout to the public hearings, there is no doubt that the Board is looking to penalize the Islamic community for their proposed structure. There has never been a similar reaction from the community regarding the construction of a Christian building. The objection to the mosque is so clearly prejudiced that federal investigators are looking into investigating the Board of Commissioners.

Comparisons will of course be made to citizens protesting the building of the proposed Park51  Islamic community center at Ground Zero, but comparing these two constructions makes virtually no sense. The proposed mosque and cemetery of Newton, County Georgia is not being built near the site of a massive American tragedy, that must be preserved for historical record. It is not angering locals because they think it disrespects the memory of lives lost (although that logic is flawed in and of itself). In fact, the reason Georgians want to shut down the construction of the mosque and cemetery is because at least some fear it will attract refugees to their community.

Tens of thousands of refugees have been forced from their homes because of uncontrollable violence, shuttled from country to country looking for a safe haven, trying to learn new languages, adjust to a new culture and, above all, contribute and participate in their new communities. The U.S. will not be accepting the same number of refugees that Europe has; our public services and law and order will not be strained under the weight of a population explosion like our European allies. We are accepting and seeking to aid refugees, but we are taking in only a minuscule portion of those who are seeking shelter–and yet, that is still too much for the residents of Newton County.

Never mind that the state of Georgia will be resettling far fewer refugees than states such as Michigan, Illinois and California or that the construction of a single mosque is not in fact what puts a community on the short-list for refugee settlement. Never mind that refugees are seeking to create new lives in which they will become participants in the community, working local jobs, paying county taxes, and sending their children to local schools. What is truly at the core of the objections to the mosque is more than bigotry, it is selfishness. Newton County residents are so afraid of sharing their resources, even land which has been purchased legally for a fair price, that they will not let fellow community members build a simple structure. It seems the refugee population is right to steer clear of them.

Jillian Sequeira
Jillian Sequeira was a member of the College of William and Mary Class of 2016, with a double major in Government and Italian. When she’s not blogging, she’s photographing graffiti around the world and worshiping at the altar of Elon Musk and all things Tesla. Contact Jillian at Staff@LawStreetMedia.com
Share:
Related ItemsGeorgiaIslamIslamophobiaMosquePrejudiceRefugeeRefugee Crisis