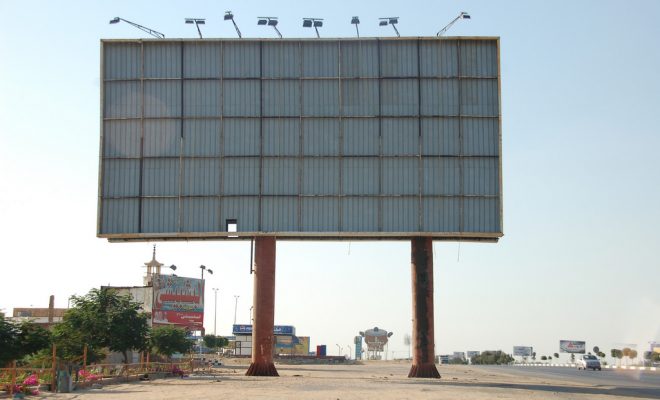 Sometime last week, a mysterious billboard showed up in Pearl, Mississippi, and residents couldn’t figure out whether to be upset or not. The message could be interpreted as either racist or anti-racist. Along Highway 80, Donald Trump’s message “Make America Great Again” is printed on a famous photo of civil rights protesters the moment before they clashed with police in Selma in 1965.

“I don’t really know what to think,” Pearl resident Madeline Nixon said. “It’s definitely offensive, but it’s their right at the same time. And that’s what we as people need to understand: That everyone is entitled to their First Amendment.” On social media, some seemed to think it was posted by Trump himself and is symbolic of how he wants to crack down on minorities.

But it was actually an arts group called For Freedoms, co-founded by Eric Gottesman, that put the billboard up. The group wants to inspire political discussion and dialogue through controversial projects. Gottesman said there is no specific intent behind the picture, and it is neither pro-Trump nor pro-Clinton. It was rather an effort to get people talking; when was America great? He said to CNN:

What we hear today in some political rhetoric is that making America great means enforcing a single vision on America. What we’re trying to do is use art to provoke people to talk about these things and bring them to a different kind of conversation, one that goes beyond symbolic gestures of what America is supposed to stand for.

Mayor Brad Rogers told local media, “I don’t like the ad, but there’s a lot of things in life I don’t like and sometimes there’s nothing I can do about it. This is one of these cases.” Originally he said it didn’t violate any laws and therefore could stay. But on Friday he asked For Freedoms to take it down, which they agreed to do sometime this week. Mississippi Governor Phil Bryant called the artwork reprehensible and divisive, but residents seemed to view it positively, once they found out about the origins of it.

SEE: This is what I’m talking about. Artists forcing the question. Big love to @forfreedomspac.https://t.co/KwcelQsrEp

“I don’t see anything wrong with it. That’s true that there have been too many killings that’s senseless to me,” said resident Lizzy Brackett. “So yeah, we need to get back to where we can trust the police again, where we feel safe.”

According to Gottesman, they wanted to put the artwork up in Selma, but there were no billboard spaces available. So they looked at other places with a historic connection to race relations, and picked Pearl. And they feel that if people are talking about the billboard, then they completed their mission.

Emma Von Zeipel
Emma Von Zeipel is a staff writer at Law Street Media. She is originally from one of the islands of Stockholm, Sweden. After working for Democratic Voice of Burma in Thailand, she ended up in New York City. She has a BA in journalism from Stockholm University and is passionate about human rights, good books, horses, and European chocolate. Contact Emma at EVonZeipel@LawStreetMedia.com.
Share:
Related ItemsArtBillboardMake America Great AgainMississippiPearlPoliticsTrump