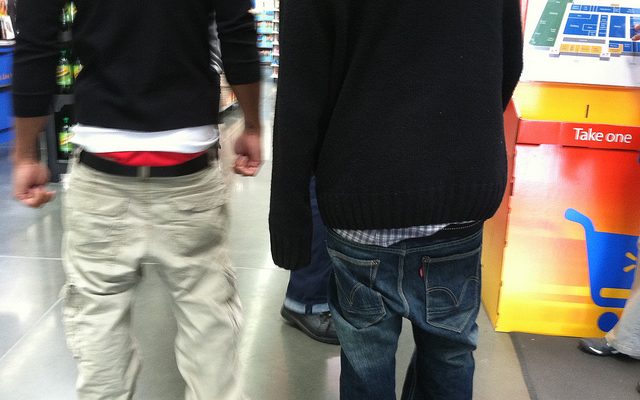 Mississippi Representative Tom Weathersby proposed a bill last week that would prohibit sagging pants in the state. Anyone who commits the offense would be subject to fines up to $100 and psychological and social counseling.

According to Mississippi Today, the GOP lawmaker filed House Bill 1353 in response to a constituent’s encounter with a group of young men who “wore their pants too low” and became belligerent after they were asked to pull their pants up.

“Anti-sagging” provisions have gained some traction over the past couple years. As the Huffington Post points out, communities like Opa-Locka, Florida and Wildwood, New Jersey have adopted bans on sagging pants, and two high school students in Tennessee, both black, were jailed for “indecent exposure” because of their low-riding clothing.

Hinds County, Mississippi made an effort to outlaw sagging by proposing a $10 fine on those who violated the ordinance. In that 2012 case, local government officials equated sagging pants with the Jackson area’s youths’ inability to get jobs.

The Mississippi chapter of the ACLU pushed back, warning that the ordinance may–as ACLU representative Bear Atwood told ABC News–“end up targeting black neighborhoods and, for kids who have done nothing other than wear their pants too low, brings them into contact with the police unnecessarily.” The ordinance was eventually voted down.

Mississippi state’s most recent anti-sagging bill invites a multitude of questions. How low do pants have to be to be considered “indecent and vulgar”? What will psychological and social counseling actually do to prevent this low-hanging atrocity from persisting?

Perhaps, a more prudent question is why do legislatures and local municipalities think it’s okay to legitimize respectability politics in black communities?

To start to define “respectability politics,” we can look to the statement that the Mississippi chapter of the ACLU shared in its response to the Hinds County proposed ordinance:

We all want to see our young people grow into productive, engaged citizens, but this is not the way. Saggy pants bans will have long lasting harm in our communities. Such bans will divert precious resources from law enforcement. Let’s spend those resources on education, after school activities or new text books. Rather than open doors for youth, saggy pants bans will close doors of opportunity.

The Mississippi ACLU statement begins an argument that helps to pinpoint the nucleus of what is wrong with the respectability politics argument: Why should forcing black communities to adapt to standards of “respectability” be a focus for legislation when the culture of poverty is created and exacerbated by discriminatory policies that result in the lack of resources afforded to these communities?

Politics of respectability seek to blame the condition of black lives in America solely on black people–as if their agency is not limited by institutions and structures that are the result of years of discriminatory policies. This presents a flawed reality in which equality for African-American can be achieved if only young black men pulled up their pants and if young black women dressed better.

It also puts the onus on marginalized people to aspire to standards set in the interest of maintaining hierarchy in order to gain some semblance of equality and respect. Respectability politics defines racism as something black Americans will just have to overcome. As Mychal Denzel Smith writes in his book “Invisible Man Got the Whole World Watching,” “It’s only when [black people] live up to the stereotypes that we limit our opportunities.”

Mississippi is a state where African-Americans, who make up almost 40 percent of the state’s population, still suffer from the residual effects of the state’s “Black Codes” and brutal implementation of Jim Crow. It is a state whose flag waves proudly while containing a tribute to the Confederate flag and has school districts that, even 62 years after Brown v. Board of Education, only recently “officially” desegregated. It is also home to one of the nation’s highest poverty rates and worst public school systems.

In HB1353, we see Mississippi’s desire to focus its energy not on actions that will make any attempt to alleviate its many problems, but on bills that criminalize certain choices and create a measurement of a human being’s deservedness of fair and equal treatment based on how many inches one’s pants falls below one’s butt.

Austin Elias-De Jesus
Austin is an editorial intern at Law Street Media. He is a junior at The George Washington University majoring in Political Communication. You can usually find him reading somewhere. If you can’t find him reading, he’s probably taking a walk. Contact Austin at Staff@Lawstreetmedia.com.
Share:
Related ItemsDiscriminationMississippiRaceRespectability PoliticssaggingState Legislature