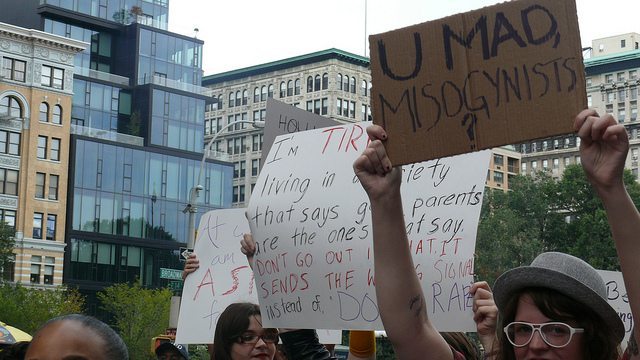 Misogynists Are At it Again, Now With T-Shirts!

Yeah you did! Because you’re smart and well informed and give a crap about where this nation is headed, am I right?

So today, instead of reacting to the SOTU—because let’s be real, you’ve read a thousand of those pieces by now already—we’re going to talk about something a little less official. A little more ridiculous. A little more—Meninist.

Yep, that’s right. Meninist is a word now. Thanks, Men.

But who is a Meninist, you ask, and what in fuck’s name is Meninism? Sadly, it’s not an adjective used to describe a person who is both a zealous believer in Leninism and also suffering from meningitis.

I love the word #meninist. It cleverly combines the painful brain inflammation of “meningitis” with the doomed zeal of “Leninist”.

We’re sorry, Tom Freeman. We like your definition a whole lot better.

Nope. In fact, Meninism is a sad little play on Feminism, because those goddamn men’s rights activists are so fucking convinced that their lives are super hard and women are out to get them.

So basically, the Meninist movement has gone something like this, so far.

Men started tweeting at each other with a cute little Meninist hashtag. It started out as a joke (rolling my eyes so hard right now), and then morphed into an outlet where people with penises could bitch about how hard it is to be a man in the twenty-first century.

The first challenge, it seems, is spelling. #MeninistTwitter and #MenimistTwitter are used interchangeably across this little trend, which I think is probably the funniest detail about this whole thing.

Anyway! After these dick-swingers had built up something of a Twitter community, some entrepreneurial folks decided to capitalize on this jackassery and make some merch.

And so was born the Meninist T-shirt and hoodie combo. Douche canoes galore are modeling their swag proudly on Twitter.

And some of them are even totally not-ironic women! Because men need equal rights too, guys. It’s just so unfair that they get to make more money than women do, spend less on their cost of living (having a vagina is expensive, yo), participate less in childrearing and other household tasks, and control the vast majority of corporate and governing bodies across the globe.

So much power, so little justice.

Folks, I can’t. And apparently, neither can a lot of you! Because some wonderful feminists also took to Twitter to mock and ridicule these Meninist fuckers, because COME ON. This shit is ridiculous.

noticed a little typo in the new #meninist hoodies, so i thought i'd help out! pic.twitter.com/7E4NuEdC1b

You folks are heroes.

But, all jokes aside, this Meninist crap is genuinely not okay, and here’s why.

A feminist is, by definition, “a person who believes in the social, political and economic equality of the sexes.” Thanks for defining this baggage-laden, complicated term in such a straightforward way, Chimamanda Ngozi Adichie! We love you.

So, here’s the thing. If you’re not a feminist—or, if you’re like these Meninist jerks who are actively taking a stand against feminism—that means that you don’t believe in the social, political, and economic equality of the sexes.

Now, to be fair, a lot of these Meninists don’t seem to be holding up signs telling women to get back in the kitchen. (Although a fair amount of them are pissed off that we don’t want to see their dicks.) They aren’t actively calling for the vag-havers to be oppressed. Instead, they’re just looking for some sympathy.

These seemingly reasonable Meninists are simply saying that equality between the sexes has already been achieved, and so feminism has become obsolete. Anyone who STILL identifies as a feminist is actually a man-hater, looking to reach beyond simple gender equality and over toward flipping the power dynamic, leaving men in the oppressed position that women used to be in before we got equal rights and all.

To those Meninists, I say, UNTRUE.

Gender equality has not been achieved. This is not a real thing.

Why are all of these things happening?

In part, it’s because of shitty legislation. The Equal Rights Amendment never passed, meaning that it’s still legal to deny or abridge the legal rights of women simply because they have vaginas. There are also a shit ton of laws out there that specifically bar us from maintaining control over our own bodies or accessing the health care we need.

These are the problems that are officially on the books.

But off the books? We’re in trouble there too.

As a culture, women are almost exclusively valued as objects, not people. We’re treated like ornaments to be admired, fetus incubators to be legislated, pieces of ass to be fucked. When compared to men, women are literally paid less and raped more—and that’s because we aren’t valued as highly as men are.

So, to all the Meninists complaining about how fucking hard it is to be a man in the twenty-first century:

Feminism isn’t about making life hard for you, and if you think it is, then you’re acting like a self-involved brat. Please wake the fuck up.

Women want to be valued and respected. We want to live in a world where social, political, and economic equality is a real thing.

And we want you to stop whining about it and get the fuck out of our way.