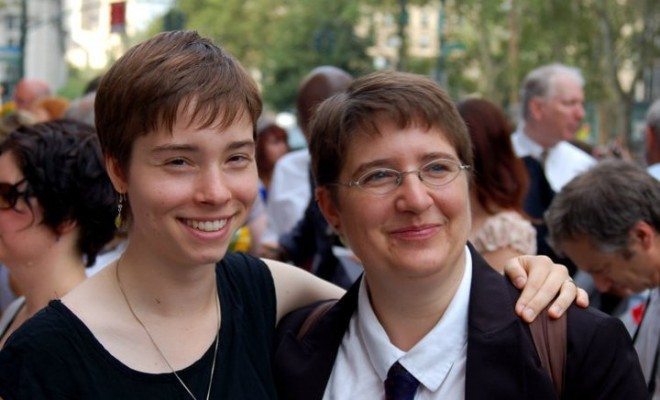 Good morning folks! Who’s enjoying this polar vortex 2.0? Not me!

To all of you in the Law Street D.C. office, is this really what you all do on a snow day? Inquiring minds want to know.

Anyway! A bit south of D.C., exciting things are happening for the gays. At least, the gays who want to get married. Newly elected Virginia Attorney General Mark R. Herring is announcing that he finds the state’s ban on same-sex marriage to be unconstitutional. As a result, Virginia will ask a federal court to strike it down, alongside two same-sex couples.

Am I the only one who finds it a tad bit amusing that Virginia is going to court against itself? Anyway.

This is very exciting news! If the ban on same-sex marriage in Virginia is lifted, gay couples all across the state will gain access to the gazillion benefits afforded to legally married couples. Not to mention, they can stop navigating the legal minefield that results from having your marriage recognized by the federal government, but not by the state government. That shit’s a mess.

In order to win his case, Herring will base his argument on the Supreme Court’s 1967 ruling in Loving vs. Virginia, which struck down parallel laws banning interracial marriage. According to Herring, Loving didn’t just open doors for interracial couples, but for couples of all types. In his view, Loving found that couples have a fundamental right to marriage itself, and that right cannot be withheld based on a couple’s race, sexual orientation, or gender identity.

But I’m not just excited because, obviously, yay for civil rights and an end to marriage discrimination. (Also, let’s not forget that marriage is a pretty problematic institution all to itself. Grain of salt here, people.)

Aren’t they the cutest? They’re the cutest. Courtesy of Hannah R. Winsten.

I met Emi and Hannah back in 2010. We all went to NYU together, and we were all big lezzies. Naturally, we ran in the same circles.

Not really. I actually met Emi once at an LGBT club meeting in September 2009, and thought she seemed cool but was too shy to talk to her. (Socially awkward lesbian moment, over here.) The following semester, we wound up having two classes together and seeing each other literally every single day of the week, so we became fast friends.

Guys, Emi was awesome. She was my college bestie that year, and I was totally bummed when she graduated.

But! Emi’s life got all kinds of fabulous when she graduated from NYU. The state of New York legalized gay marriage in June 2011 — just in time for Gay Pride — and in July, she married her longtime lady love, Hannah.

They are so cute I can’t even handle it. Courtesy of Hannah R. Winsten.

Anyway, they got married, I babysat their awesome cat in Brooklyn during their honeymoon, and then a few months later, they randomly moved to a farm in Virginia.

When I say randomly, I mean RANDOMLY. It literally felt like they were here one day, and gone the next. I secretly wondered if they were running from the CIA or something. Probably not. Anyway, they run Heart Moss Farm now, and they’re super happy, and they’re super cute.

With their adorable dog, Zach. Courtesy of Hannah R. Winsten.

But! Being married in Virginia is complicated business, as Emi told me this morning.

“We recently re-filed our 2011 taxes — after my lawyer aunt who works for the IRS suggested it — when we were forced to file as married for NYC and NY state taxes but single federally. When we got our refund, it was A LOT of money,” Emi said. “If Va. doesn’t at least recognize gay marriage, we’ll have to file separate for Va. but joint federally, which essentially means you pay tons and tons of extra taxes. It is nasty business, especially when we are not making a lot as it is.”

So, basically, if Herring succeeds in his quest to get Virginia to recognize gay marriages, Emi and Hannah will be in a much better financial situation. And that’s awesome.

But there are other benefits to be had as well. Most of these run along the lines of basic respect for an individual’s safety and well being–like being allowed to visit each other and make decisions if one of them lands in the hospital. That shit’s a whole lot easier when there aren’t a bunch of contradictory, inconsistent laws arguing over whether you’re legally married or not.

So basically, we’re all rooting for Attorney General Herring over here, and also for Hannah and Emi. We’ll check back in with them once the ruling goes through.

In the mean time, all you Virginians should check out Heart Moss Farm’s pasture-raised chickens at your local farmer’s market. Yay for supporting queer businesses!

What do you think about Herring’s actions and Virginia’s gay marriage ban? Tell us in the comments!