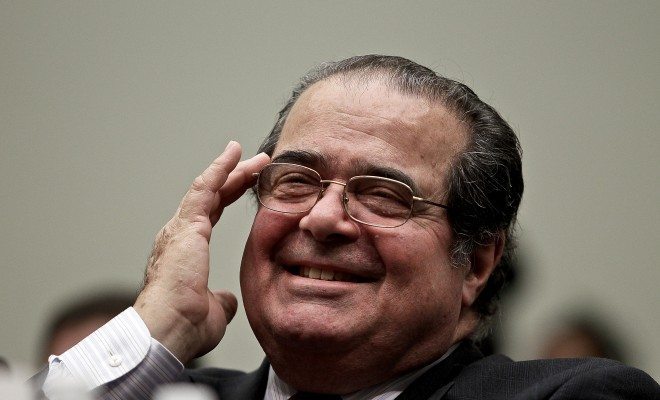 Justice Scalia Gets It Right: There is a Political Demand for Religion

I know, I know. His “orthodoxy” and “originalism” are nothing but facades that make a joke out of Constitutional interpretation. His recalcitrance has a deteriorating effect on America. His arrogance knows no limits. But one of his thoughts contains a basic interpretation of the Constitution that is extremely important. A recent Denver Post article quotes Scalia saying, “’There are those who would have us believe that the separation of church and state must mean that God must be driven out of the public forum…That is simply not what our Constitution has ever meant.’”

I’ve already written about why it’s okay — and good — to include religion in the public discourse. So I will simply sum up my argument here: religion is still an integral part of American life, religion is still an integral American social institution, and religion still informs the morals of American public officials. Instead of dismissing that out of fear of a too-close relationship between church and state, let’s have it out in the open for our discussions. Now this one is hard for me to swallow, but it behooves me to agree with a basic component of Scalia’s belief. The separation of church and state, vital as it is, does not necessitate the eradication of religiosity from American life, public or private.

Despite feeling empty inside for supporting something that Justice Scalia said, I’ll press on. The topic is of utmost importance right now as more Americans are unhappy about perceived lack of religiosity, according to Pew Research. As 72 percent of Americans believe that religion has lost influence in the country, “a growing share of the American public wants religion to play a role in U.S. politics,” Pew’s Religion & Public Life Project claims. Scalia and I are on to something: religious presence in American public life is not only Constitutionally acceptable, but desired by an increasing number of people in the country.

What does this mean for political alignments in America? On one hand Pew notes that more “of the general public sees the Republican Party as friendly toward religion (47%) than sees the Democratic Party that way (29%).” On the other hand, there are “some signs of discontent within the GOP among its supporters, including evangelicals.” While Christians still dominate the American religious atmosphere, their political spread is complicated. Black Protestants overwhelmingly support the Democratic party as opposed to their White Republican counterparts. Meanwhile, the Catholic demographic is split between Republican Whites and Democratic Hispanics.

These spreads indicate how differentiated all religious Americans — even Christian Americans — are politically. Therefore, the growing number of Americans looking to see more religiosity in the U.S. political sphere is comprised of a variety of political interests. Neither liberals nor conservatives, then, should be too optimistic or pessimistic because of these demographics. Only those who oppose Scalia’s conception of church and state should be concerned. While religion may be less prevalent in public life right now, those who oppose religion in public life also have waning clout.

Scalia’s statement is consistent with the growing public sentiment, but how should the Supreme Court interpret this opinion? Of course, according to Scalia, the Supreme Court should completely ignore the current public dynamic and focus only on the “original” meaning of the Constitution. And in Scalia’s eyes, the “original” meaning of the First Amendment “explicitly favors religion” over non-religion, as he mentions in a recent Court opinion. Will the Supreme Court, and Scalia, look to the recent sentiments of the public to validate a preference of the religious over the non-religious? Or will some members of the Court defend agnostic and atheistic rights when applicable? With the Court slated to hear a few cases on religion in the near future, these questions should be mainstream.

Jake Ephros
Jake Ephros is a native of Montclair, New Jersey where he volunteered for political campaigns from a young age. He studies Political Science, Economics, and Philosophy at American University and looks forward to a career built around political activism, through journalism, organizing, or the government. Contact Jake at staff@LawStreetMedia.com.
Share:
Related ItemsAntonin ScaliaChristianityConstitutionEvangelismPoliticsProtestantismReligionScaliaSCOTUSSupreme Court