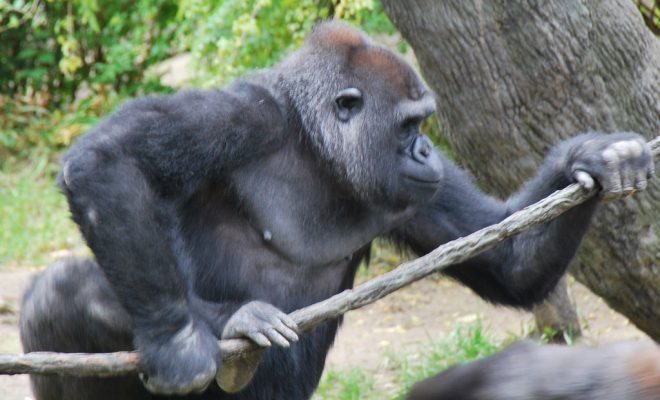 “The gorilla should never have been shot.”

“I don’t know, I think the Cincinnati zoo made the right decision. The child was in danger!”

“Where was the child’s mother?”

Sharing opinions like these are how a lot of conversations started this Memorial Day Weekend, as barbecue-goers across the country debated the Cincinnati Zoo’s decision to shoot and kill a rare gorilla after a child fell into its enclosure.

The incident occurred on Saturday, when a three-year-old boy crawled under a rail and through a wire fence, before falling nearly 20 feet over the moat wall into the zoo’s gorilla exhibit. Luckily, the child survived the fall, but within minutes a 450-pound western lowland gorilla had grabbed the child and began dragging him through the moat.

Bystanders captured the gorilla dragging the child on video, which can be seen below.

Immediately, critics debated whether or not the zoo made the right decision in killing the critically endangered animal, rather than tranquilizing it.

We are heartbroken about losing Harambe, but a child’s life was in danger and a quick decision had to be made by our Dangerous Animal Response Team. Our first response was to call the gorillas out of the exhibit. The two females complied, but Harambe did not. It is important to note that with the child still in the exhibit, tranquilizing the 450-pound gorilla was not an option. Tranquilizers do not take effect for several minutes and the child was in imminent danger. On top of that, the impact from the dart could agitate the animal and cause the situation to get much worse.

But zoo officials weren’t the only ones under fire.

Social media exploded with furious commentators shaming the boy’s parents, specifically his mother, for not better watching over their son.

Don’t take your kids to the zoo if you are unable to keep an eye on them at all times. Simple. #JusticeForHarambe

What makes all of this worse is that Harambe wasn’t being aggressive. At all. I hope those parents get prosecuted. #justiceforharambe

#JusticeForHarambe when a caged gorilla is more aware of where your child is than you are, you’re not fit to be a parent

A woman who claimed to have witnessed the incident defended the parents in a long Facebook post, calling it a “terrible accident.”

According to People, another woman claiming to be the mother of the child defended herself in a now-deleted Facebook post stating, “As a society we are quick to judge how a parent could take their eyes off of their child and if anyone knows me I keep a tight watch on my kids. Accidents happen.”

As a result, people began flooding the woman’s profile with hateful comments. They then blasted the Facebook page of a preschool where a woman by the same name works.. After the preschool was forced to delete its page, people then began harassing women on social media who share her name, in some instances sending death threats.

The Cincinnati Enquirer reported that the threats were enough for the Cincinnati police to get involved. Police spokesman Lt. Steve Saunders told the paper,

Even though they’re not direct death threats, we’re going to reach out to the mother and let her know what’s going on, if she doesn’t know already. We’re going to keep her in the loop. We’re going to err on the side of safety for her and her family.

A Facebook group condemning the mother called Justice for Harambe already has over 123,000 likes at the time of publication, and a Change.org petition under the same name is asking Hamilton County Child Protection Services to investigate “the child’s home environment in the interests of protecting the child and his siblings from further incidents of parental negligence that may result in serious bodily harm or even death.”

There is also a second petition with over 122,000 signatures calling for the passage of “Harambe’s Law” to hold “negligent visitors” responsible for the death of endangered animals. The petition says,

It is completely negligent for any man, woman or child to enter an exhibit or restricted area at a zoo, sanctuary or wild animal park. To ensure this never happens again, we would like to enact Harambe’s Law, that if at anytime this shall occur, the negligent party and or party’s be held financially and criminally responsible for any harm and or loss to an animal, specifically when said animal is Critically Endangered.

The criticism prompted a spokesperson from the Hamilton County prosecutor’s office to tell the New York Times that the matter had been referred to the Cincinnati Police Department for investigation. She stated that if the police were to pursue, it would be “general inquiry” into the incident, and would not be directed at either the mother or the zoo. But from the sounds of it, the investigation is more of courtesy and likely will not materialize into any criminal charges.

Editor’s Note: Original reports stated that the boy’s age was four-years-old, instead of three-years-old. The post has been altered to reflect this correction.

Alexis Evans
Alexis Evans is an Assistant Editor at Law Street and a Buckeye State native. She has a Bachelor’s Degree in Journalism and a minor in Business from Ohio University. Contact Alexis at aevans@LawStreetMedia.com.
Share:
Related Items#JusticeForHarambeCincinnati ZooGorillaGorillagateHarambe