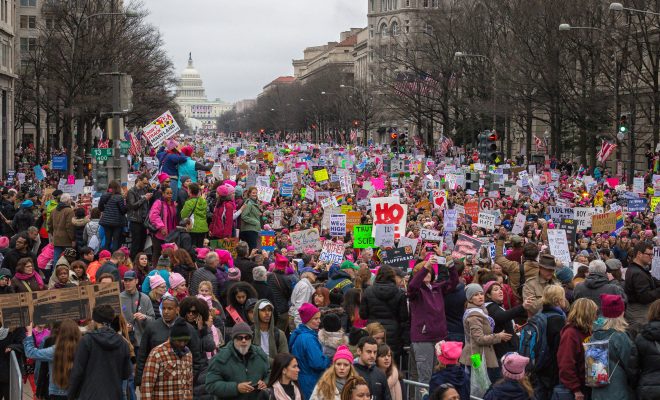 Meet the French Feminists Who Created a Viral Parody Photo

Earlier this week, President Donald Trump signed an order that will reinstate the Mexico City Policy, also known as the Global Gag Rule. It will prohibit international aid groups that receive U.S. funding from providing information about abortions. The fact that Trump, surrounded by other middle-aged white men, signed legislation concerning women’s bodies and reproductive health caused a lot of reactions worldwide. The photo in question looked like this:

As long as you live you’ll never see a photograph of 7 women signing legislation about what men can do with their reproductive organs pic.twitter.com/dXjfVjnRiX

A group of French feminists, calling themselves 52, reacted strongly to the news and created the perfect response. The group took a photo of Hillary Clinton signing papers and merged it with a 2009 photo of President Obama, surrounded by a group of WASPs, female fighters from World War II. They posted the result with the headline, “BREAKING NEWS: In the US ejaculation for non-procreative purposes is now forbidden.”

A member of 52, who goes only by Sophie, said that the photo is clearly a joke, but that they made it “to ridicule something that boggles the mind: For centuries, it’s been men who dictate women’s bodies.” She said that men constantly tell women what to do and how to look. And Donald Trump just reversed what progress has been made in recent years by signing this legislation. “This picture of the president shows very well how men get to dictate the rights women have,” Sophie said. “It really wound us up.”

According to many studies, making abortion illegal doesn’t lead to fewer abortions. A ban will only lead to women seeking unsafe abortions that could kill them.

The women founded the group in September and adopted their name because women make up 52 percent of France’s population. They held their first demonstration in France in January, aiming to achieve more empowerment for women. Their photo creation has become hugely popular in only a few days, but will any male politicians actually listen?

Emma Von Zeipel
Emma Von Zeipel is a staff writer at Law Street Media. She is originally from one of the islands of Stockholm, Sweden. After working for Democratic Voice of Burma in Thailand, she ended up in New York City. She has a BA in journalism from Stockholm University and is passionate about human rights, good books, horses, and European chocolate. Contact Emma at EVonZeipel@LawStreetMedia.com.
Share:
Related ItemsAbortionDonald TrumpFeminismfeministsFranceFrenchMemephotoViral