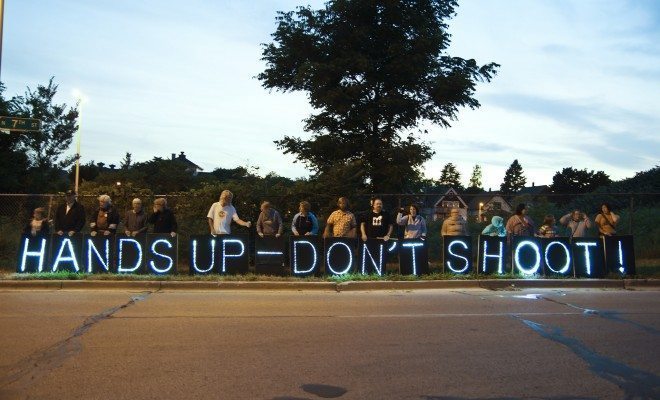 Have you all awakened from your turkey coma? Good. Because the situation in Ferguson has taken an interesting turn, and you’re going to want to be alert for this one.

The Oath Keepers have descended upon Ferguson in response to the riots, taking up armed positions on the rooftops of local businesses to guard against looters. Working as a sort of vigilante militia, these rooftop patrollers are veterans, ex-cops, and paramedics. They work at night and, apparently, they’re prepared to shoot down anyone who crosses their path.

So, here’s the thing about the Oath Keepers. On the one hand, some folks are happy they’re there. Local business owners who are receiving their protection have reported feeling safer, and that’s pretty great.

However, the Oath Keepers are a super problematic—and frankly, pretty scary—organization, and their presence in Ferguson is anything but benign.

The Oath Keepers are a radical, militant, right-wing non-profit that was founded in 2009. Not coincidentally, their appearance aligns perfectly with the election of President Obama and the rise of the Tea Party. The Oath Keepers are—shockingly—mostly white men, and their stated mission is to protect Americans’ Second Amendment rights and to prevent a dictatorship from ever taking hold in the U.S.

But really, that’s a lot of coded language for racist, paranoid, gun fanatics who decided to form a vigilante militia in response to a black president being elected to office.

Here’s what the Oath Keepers are really about—they’re a particularly militaristic arm of the Tea Party, a group that sprang up with Obama’s election because conservatives were scared as fuck. The economy was (and, let’s be real, still is) in the shitter, thanks to Republican tax policies that caused the housing crisis of 2008. Their beloved straight, white, Christian, family-man conservative president, George Dubya, was leaving office and being replaced by someone new and relatively unknown. The face of the United States was changing drastically.

So, naturally, conservatives freaked the fuck out. Enter the Tea Party and its bevy of reactionaries—folks dressing up in colonial garb, romanticizing the Founding Fathers and their Constitution, ignoring the existence of slavery, and holding up signs of President Obama fashioned as Hitler, the Devil, and a monkey, all demanding to see his birth certificate.

Yeah, so, the Oath Keepers are those people. Except they carry guns and act as unlicensed, armed security guards whenever things start to happen that they don’t like.

What’s high on their list of things they don’t like? Black people rioting in the streets after a grand jury decided that their lives don’t matter, and that we should all just collectively shrug our shoulders as another young black man’s life gets cut short—like Trayvon Martin and Eric Garner before him—and hold no one accountable for his death.

This the type of shit that gets the Oath Keepers riled up to restore order. God forbid people of color should rise up and demand that their lives be valued by the American justice system.

This is the third time in three years that we’ve had to collectively mourn the untimely death of a young black man, shot down because his blackness made him threatening to the shooter. And those are just the cases that have made national headlines. How many more people of color have been cut down in the last three years by a justice system that’s stacked against them?

More than any of us would like to admit.

And so, as the Oath Keepers descend upon the city of Ferguson, it’s no coincidence that the men standing on shop rooftops with guns are mostly white, and the assailants they’re taking aim at are mostly black.

These radical right-wingers are feeling all kinds of sympathy for the store owners whose businesses have been looted. And that sympathy isn’t entirely misplaced. It’s not a situation that any of us would wish on another person—to have their life’s work plundered or burned to the ground.

But if we all take a step back from the riot-shaming that is implicit to the Oath Keepers’ presence in Ferguson, it’s clear what side of this issue the radical right is on.

Martin Luther King Jr. once said that a “riot is the language of the unheard.” And conservatives, like the Oath Keepers, want to keep the unheard quiet. They’ll shoot them down to preserve the silence if they have to.

Instead of patrolling rooftops, threatening to gun down people who are fighting for their lives, the Oath Keepers should be listening to this latest outcry from the unheard.

They’re telling us that black lives matter. Michael Brown matters. Trayvon Martin and Eric Garner matter. And, contrary to what the American justice system might have us believe, these losses aren’t to be taken lightly.

So please, Oath Keepers, get the hell off the rooftops. Stop trying to intimidate the unheard people of Ferguson into silence.

Try listening to them instead.