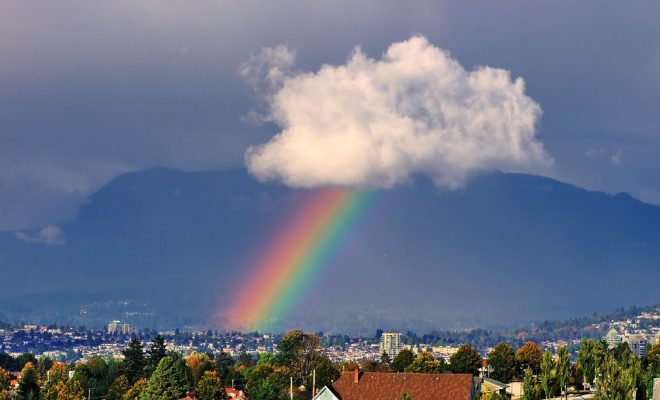 Bryan Fischer, host of the talk radio program “Focal Point,” made a statement on Twitter over the weekend claiming that gay people have stolen the rainbow from God. Citing the Bible passage Genesis 9:11-17, Fischer called the rainbow flag the “worst example of cultural appropriation ever.” Considering Fischer posted the tweet the day after April 1, it could have been seen as an April Fools’ Day joke. But that does not seem to be the case.

Worst example of cultural appropriation ever: LGBTs stole the rainbow from God. It’s his. He invented it. Gen. 9:11-17. Give it back.

A lot of people responded with their own interpretations of who actually stole the rainbow.

@BryanJFischer oh no, the loathsome gays, they’re hoarding all the light refracted through water vapor in the entire world!!!

Many of us know that Super Mario Kart had a track made of rainbows.

Worst example of cultural appropriation ever: LGBTs stole the rainbow from Mario. It’s his. He invented it. Super Mario Kart. Give it back. pic.twitter.com/YLqaN0hdnW

Could it have been the Care Bears?

While we’re at it, it’s more than rainbows that are being stolen.

Worst example of cultural appropriation ever: Steve Jobs stole the apple from God. It’s his. He invented it. Gen. 2:2-6. Give it back.

Maybe Fischer should think more before speaking his mind.

worst example of cultural appropriation ever: white people stole jesus christ from the middle east. he was jewish and brown. give him back. https://t.co/FuYdT8juiL

Fischer’s statement follows the death of the man who actually created the LGBTQ community’s rainbow flag, Gilbert Baker. He passed away quietly in his sleep last Thursday, at the age of 65. Baker created a bunch of different flags and advocated for gay rights while he was stationed in San Francisco. Even though he was there to serve in the army in the 1970s, he also was an anti-war advocate. He created the rainbow flag for the first openly gay man who was elected for office in California, Harvey Milk, in 1978.

Rest in peace Gilbert Baker – creator of the rainbow flag. A perfect symbol for unity and pride. pic.twitter.com/VDag5KEv6Z

Bryan Fischer’s views are so extreme that the church where he was serving as a pastor kicked him out. He has blamed gay men for the Holocaust, called for the criminalization of homosexuality, a permanent ban on Muslim immigration, and has made many more extreme comments. He has said Hillary Clinton was possessed by a demon and said Sarah Palin’s joke about waterboarding was “clever and funny,” since “waterboarding is not torture.”

Emma Von Zeipel
Emma Von Zeipel is a staff writer at Law Street Media. She is originally from one of the islands of Stockholm, Sweden. After working for Democratic Voice of Burma in Thailand, she ended up in New York City. She has a BA in journalism from Stockholm University and is passionate about human rights, good books, horses, and European chocolate. Contact Emma at EVonZeipel@LawStreetMedia.com.
Share:
Related ItemsAlt-RightBryan FischerGay RightsGodLGBTQRainbow Flag