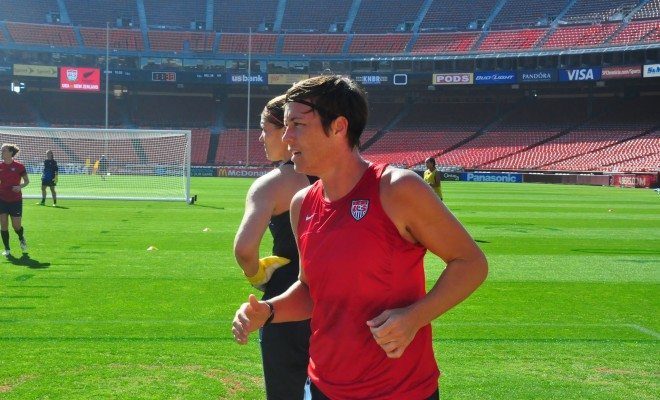 I know, I know. I shouldn’t be so gleeful that so many lesbians were OUT and about (see what I did there?) at the World Cup this year.

None of that is true. I know.

BUT I AM STILL SO HAPPY ABOUT THIS.

By this, of course, I mean the international platform that the World Cup has become for out lesbian players to advocate for genuine queer inclusion in professional sports.

I also mean–and I giggle gleefully each time I think about it or watch the video (now you can, too: scroll down!!)–Abby Wambach jogging over to the sidelines after winning the World Cup Sunday night and kissing her wife, Sarah Huffman.

But I’m still sad about it. I’m sad that it’s such a big deal.

To describe what I mean, I–the English PhD student and aspiring novelist–am going to have to turn to Tumblr (at least I don’t take myself too seriously, right?). Because really, carmillastakesmyheart hashtagged this post perfectly: When “Just Straight Things # 18” was deemed by the delightful and sadly accurate JustStraightThings blog to be “donating blood” (because we queers aren’t allowed to due to queerphobic and medically meaningless FDA regulations), carmillastakesmyheart reblogged the post with the hashtags #thismademelaugh and #thenmademereallysad (see below).

Which is exactly how I feel about the sensation that has become of Wambach and Huffman’s “Kiss Seen ‘Round the World.” Because it is not (just) an emblem of queer “progress”–the overwhelmingly supportive media response to it is an indication of how far we still need to go.

Because some media couldn’t even be bothered to acknowledge that Sarah is her wife.

The homophobia via erasing queerness doesn’t surprise me.

So yes, the kiss makes me laugh with happiness.

But then it makes me sad. Because it’s a big deal. It’s a huge, sensational, enormous deal.

And it really shouldn’t be at all.

Jennifer Polish
Jennifer Polish is an English PhD student at the CUNY Graduate Center in NYC, where she studies non/human animals and the racialization of dis/ability in young adult literature. When she’s not yelling at the computer because Netflix is loading too slowly, she is editing her novel, doing activist-y things, running, or giving the computer a break and yelling at books instead. Contact Jennifer at staff@LawStreetMedia.com.
Share:
Related ItemsAbby WambachLGBTPoliticsSoccerUnited StatesWomenWomen in SportsWorld Cup