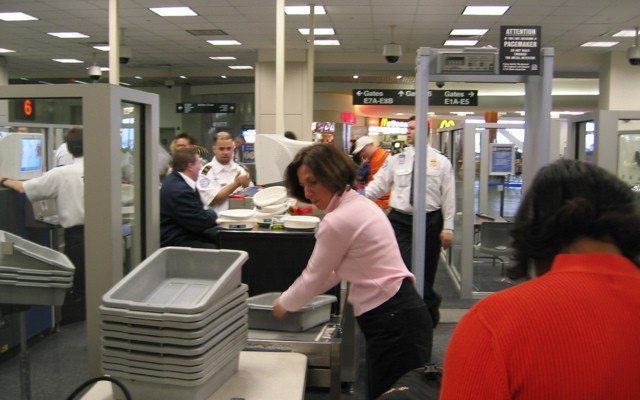 Does the TSA Really Keep You Safe?

The Transportation Security Administration agents recently failed 67 out of 70 total tests, missing 95 percent of the of mock explosives and weapons that were smuggled into airports by undercover Homeland Security Red Teams, ABC News Reported.

Since the administration’s last review in 2009, the Department of Homeland Security spent $540 million on checked baggage screening and $11 million to train Transportation Security Administration (TSA) agents. Despite these expenditures, ABC news notes that the TSA has “failed to make any noticeable improvements in that time.” Professors John Mueller and Mark Stewart further reviewed homeland security expenditures using a cost-benefit analysis. They conclude, based on the costs of security and the financial damages of potential attacks, American spending has not produced the necessary results.

The failed airport security tests come at the worst possible time for the TSA. In the past couple months, we have witnessed multiple breaches in airport security. In April, a teenager snuck into a wheel well on an airplane leaving from the West Coast and flew all the way to Hawaii. In late May, a man was able to bypass airport security at LAX, only to be subdued by a TSA officer with a taser as he reached gate 66.

Last August, a woman was able to board a plane in San Jose without a ticket. The woman made it all the way to her destination before being arrested by police, who later determined that the she suffered from a mental illness.

Changes will be made in response to the identification of the vulnerable aspects by these tests.

According to the ABC News report, one undercover agent was actually stopped after setting off the alarm at the magnetometer, but after a pat down, TSA agents failed to find fake explosives taped to the undercover agent’s back.

The question now becomes, what new security measures will be enacted by the TSA, and will these new measures be any more effective?  The TSA recently started testing electronic devices traveling to and from overseas cities at many U.S. airports with direct international flights. The new rule will require passengers to power on their devices when arriving at security checkpoints for overseas flights. If the device will not power on, it will not be allowed past airport security checkpoints.

Many passengers feel this does not adequately address all the security concerns as it is only being implemented in select airports and does not address the problem of passengers smuggling bombs and weapons on their bodies, which TSA agents failed to detect in the mock testing. In 2014, the TSA  confiscated 2,212 firearms at 24 airports after screening nearly 653 million passengers, a 22 percent increase from 2013 where only 1,813 firearms were confiscated.

With external security threats remaining high according to terrorism experts, it is imperative to keep internal security at its best. Homeland Security has used Red Teams for the last 13 years to detect security flaws; however, the changes never seem to address the problems accurately. NBC News notes that since 2002, TSA agents failed similar Red Team tests on several occasions, indicating that there are many existing security flaws yet to be addressed.

NBC recently learned that 270 TSA security badges went missing at the San Diego International Airport over the last two years. These missing badges would allow non-Homeland Security personnel to gain access to restricted locations within the airport. As of March 2015, the Hartsfield-Jackson Airport in Atlanta saw more than 1,400 badges go missing over a similar time period.

How are we supposed to trust TSA agents with our lives when they can not be trusted with their own badges? Unless the TSA is able to completely restructure the airport security system, it is unlikely that new changes will make a large enough difference to deal with existing security threats.

Jennie Burger
Jennie Burger is a member of the University of Oklahoma Class of 2016 and a Law Street Media Fellow for the Summer of 2015. Contact Jennie at staff@LawStreetMedia.com.
Share:
Related ItemsAIrportAirport SecurityDepartment of Homeland SecurityDHSFAAFailed Security TestsFlightsHomeland SecurityTerrorismTSA