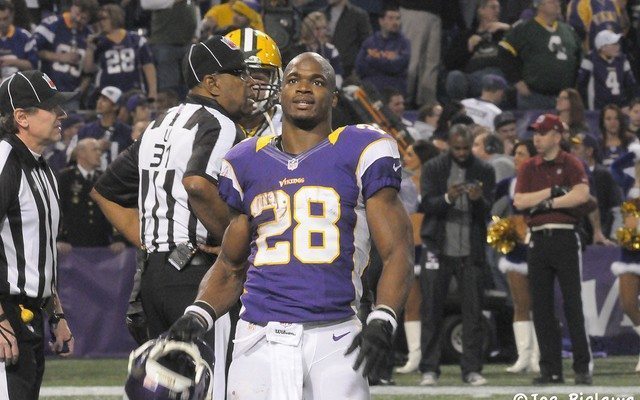 There Is No Excuse for Child Abuse, Not Even for Adrian Peterson

Right on the heels of  the Ray Rice domestic violence incident, NFL star Adrian Peterson was charged with negligent injury to a child. Known for being the best running back for the Minnesota Vikings, Peterson allegedly punished his 4-year-old son by whipping him with a tree branch, leaving cuts and bruises on the boy’s legs, backs, buttocks, hand and scrotum.

This subject is something I am really passionate about, and I was in absolute shock when Peterson gave a statement to the police following the incident claiming he felt confident in his actions, and is thankful for what spanking has done to him in his life. Each parent is responsible for choosing the way he or she disciplines his or her child, but if we start to say spanking is acceptable, how will we ever be able to set boundaries and limits? In typical NFL handling of these cases, Peterson was suspended from a game and no further action is being taken until the official police investigation is complete.

Last week I referenced the punishment for the father of a child who died as a result of being left in a hot car. That father was charged with murder. In the case of Adrian Peterson, I ask you what would happen if Peterson gave one more hit as opposed to the 10-15 lashes his poor child received, and that final hit resulted in the child’s death? Would he be let off because he didn’t intend to hurt the child? Would it be accepted like it is now, because that’s the way he grew up and spanking does “good”? I find it appalling that excuses are being made to justify what allows parents to discipline their children in this way.

Legislation is proposed all the time to stop acts of abuse toward children, and yet this incident has the potential to make parents think it’s OK to discipline their children in this way. I do not doubt that Peterson is telling the truth when he claims his intentions were harmless, but I do doubt that he feels any kind of remorse or is aware that his actions were wrong. In 2013, Peterson’s other two-year-old son was killed by his ex-girlfriend’s partner. Although Peterson had only found out about the child three months prior to his tragic death, one would have thought it would make him change his own actions.

All it takes is one hit in the wrong area, or with a certain amount of force, to cause serious harm and fall under the realm of child abuse. NFL players have the responsibility not only to be great athletes but also to be good role models. With the influx of recent incidents involving NFL players and their mistreatment of the law, I worry what effect this will have on the general public. Yes people make mistakes, yes people can change, but we should not be encouraging this behavior by making excuses. Each article I read about Rice and Peterson is drenched in excuse after excuse, each justifying the simple fact that these acts are wrong. In my opinion, if these acts of abuse were done by anyone else not in the public eye, I can guarantee the punishment would be a lot different.

Hannah Kaye
Hannah Kaye is originally from London, now living in New York. Recently graduated with an MA in criminal justice from John Jay College. Strong contenders for things she is most passionate about are bagels and cupcakes. Contact Hannah at staff@LawStreetMedia.com.
Share:
Related ItemsAmericaChild AbuseChildrenCrime in AmericaCriminal JusticeDisciplineJusticeLegalMinorsNFLPolicyPoliticsPunishmentSpankingsUnited StatesVictim