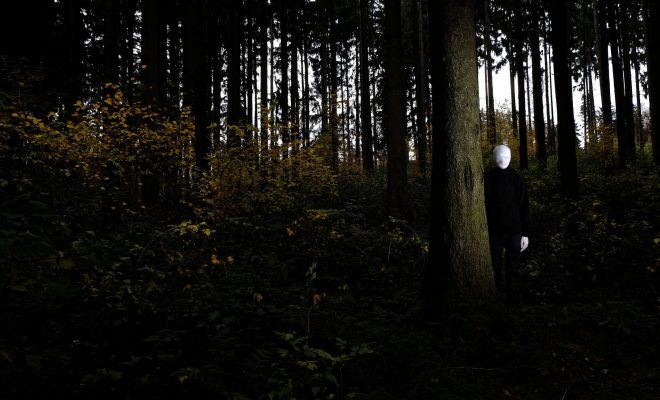 Have you just recently recovered from the creepy news story about the urban legend Slenderman? Not so fast. The Wisconsin case, in which two 12-year-old girls tried to kill a third girl by stabbing her 19 times in 2014, is far from over. And a new HBO documentary features the trial, which has picked back up again recently. The two girls, Morgan Geyser and Anissa Weier, are now 14 and are being charged as adults for first-degree homicide. This means they could serve 65 years in prison, if found guilty. But on Friday the court is scheduled to discuss psychological evaluations of the girls, which could give them a chance for a lighter sentence.

This comes at the same time that HBO is announcing its release of a documentary about the case, called “Beware The Slenderman.” It is said to focus on “the court’s deliberation whether the girls should be tried as adults or children.” The trailer is sure to send chills down your spine.

The first trailer for @HBO doc “Beware the Slenderman” is as creepy as the story it tells https://t.co/86ILbr9McI pic.twitter.com/2x18FNeGk5

The girls’ victim Payton Leutner was a classmate. They lured her into the woods reportedly convinced that they had to kill her, otherwise the tall, faceless man known as Slenderman would come and kill their families. According to the girls, they wanted to prove to people that Slenderman was real, and if they sacrificed a human, they would be rewarded with being his proxies and living in his mansion. Fortunately, Leutner survived by crawling out of the woods to the street, where a passing cyclist helped her to safety.

Geyser and Weier’s defense attorneys have tried to have their cases moved to a juvenile court, but the motions were denied in August due to the degree of premeditation. According to the state, they had planned the deed for months, lied to the victim by telling her to not move and that they would get help, and started to flee from law enforcement. As a last resort to try to get the girls a more lenient sentence, their defense attorneys entered pleas of not guilty because of mental disease or defect in the late summer. On Friday, the conclusions of the psychologists who have evaluated the girls will be discussed in court.

Entering a plea of insanity essentially means that the defendant asserts that at the time of the crime she was affected by a mental disease that prevented her from knowing right from wrong. If found guilty under those conditions, the defendant would normally be sent to a state mental hospital for treatment. Geyser has already been diagnosed with an early onset of schizophrenia. According to doctors, she was traumatized after the attack and talked to hallucinations of Slenderman in her cell.

After a suicide attempt, Geyser has spent the past six months at a mental health institute where she doesn’t get to read, draw, or even wear her glasses, much to her mother’s distress. Weier is committed to a juvenile detention center on a $500,000 bail and has recovered from a ”shared delusional belief” since she was separated from Geyser. Both girls’ parents are trying to lower the bail so that they can go home and be under house arrest.

Reality is scarier than fiction in the trailer for HBO’s Slenderman doc https://t.co/4dSpivmn73 pic.twitter.com/Ln0zcUMBux

A fact that could work in the girls’ favor is that they may have truly believed they didn’t have any other choice than to kill Leutner, since they thought their families would die unless they did. This, according to the defense, should mean that the girls only should be charged with attempted second-degree homicide. Lawyers have asked that the girls’ trials be conducted separately and with a jury from another county.

In the meantime, popular culture is still dwelling on the online myth of Slenderman that has affected so many young people and many believed the 6th season of “American Horror Story” would feature the faceless character. That didn’t happen, but it is not far-fetched to think that he will show up somewhere else soon.

Emma Von Zeipel
Emma Von Zeipel is a staff writer at Law Street Media. She is originally from one of the islands of Stockholm, Sweden. After working for Democratic Voice of Burma in Thailand, she ended up in New York City. She has a BA in journalism from Stockholm University and is passionate about human rights, good books, horses, and European chocolate. Contact Emma at EVonZeipel@LawStreetMedia.com.
Share:
Related ItemsAttempted HomicideHBOHomicideJuvenile OffendersSlendermanTrialUrban LegendsWisconsin