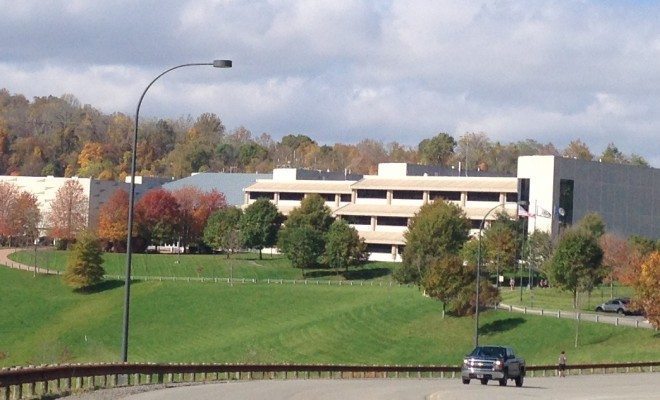 Tucked into the hills of Clarksburg, West Virginia sits one of the FBI’s largest and most secure facilities. The 1,000-acre technology campus holds the FBI’s Criminal Justice Information Services Division (CJIS), providing critical support services to American law enforcement across the country.

When arriving at the Clarksburg complex the heightened level of security is easy to notice. Visitors are background checked in advance and escorted while on the property. Although walls do not surround the complex, FBI agents patrol its grounds on ATVs. Visitors trade their drivers license for a temporary ID in order to to pass through the security checkpoint at the entrance.

The 500,000-square-foot facility in the center spans the length of nearly three football fields, housing roughly 2,600 employees. Also inside on the property is a daycare center, a 600-seat cafeteria, a fitness center, and even a power plant.

So what exactly does the FBI do there, and why does it need such security?

Not only does it house the largest division within the FBI, underneath the main office building is one of the FBI’s most important data centers. It is the home of the Law Enforcement Records Management System, which includes the largest fingerprint repository in the world, the FBI’s centralized criminal records database, the National Instant Background Check System, and several technology services for law enforcement across the country. The National Crime Information Center (NCIC), a database containing over 11 million records of criminal justice information, is used millions of times each day by American law enforcement. Whether you are buying a gun, having your background checked, or simply being pulled over by a police officer, the CJIS Division’s servers are contacted millions of times daily. Considering the importance of the information stored there and the services provided by CJIS, the security at the Clarksburg complex seems understandable.

Underneath this courtyard sits the FBI’s 100,000-square-foot data center. It provides 24/7 support to law enforcement across the United States. Courtesy of Law Street Media.

Beyond supporting the internal operations of American law enforcement, the West Virginia campus is also home to one of the FBI’s most important public facing services: the nation’s crime statistics.

Inside the Uniform Crime Report

The Uniform Crime Reporting (UCR) Program is tasked with collecting and publishing crime statistics for nearly every law enforcement agency across the country. At its inception in 1930, the program gathered statistics from 400 cities representing roughly 20 million Americans. Over time the program expanded and today it covers more than 18,000 law enforcement agencies representing 98 percent of Americans. Each year the UCR Program publishes the Crime in the United States publication, which details the country’s crime statistics on a national, state, and local level. The report is arguably the most talked about FBI publication each year, providing standardized crime statistics for agencies across the country.

Throughout its existence, the Program has undergone several important changes and improvements, but few are as extensive and as significant as the recent updates to the UCR system. From updating crime definitions to the adaptation of an entirely new system for collecting and evaluating data, the UCR is rapidly modernizing, and it is long overdue.

“We are running on 1970s technology,” said Amy Blasher, the Unit Chief of the Crime Statistics Management Unit within the CJIS. “We are in the middle of a major redesign, overhaul, [for a] brand new UCR system.” Historically, the process has been done manually, by reviewing stacks of paper submitted by law enforcement agencies, but the new system aims to eliminate paper reports altogether. Starting in July 2013, the UCR Program required all reporting agencies to begin submitting statistics in a computerized format.

The recent changes to the UCR program aim to automate much of the quality checking process, create more comprehensive data, reduce the use of paper, and ultimately decrease the amount of time it takes for information to be publicly available. “What the new system is going to allow us to do is have a public facing piece that will be able to push the data out from the states,” Blasher said. And in doing so people “will be able to go in more real time and see the data.”

The creation of each publication is a very intensive process, involving constant interaction with reporting agencies, reviewing all data to ensure quality, and collaboration among UCR staff. The FBI receives most of the statistics from state UCR agencies that collect the information from individual agencies. Currently, 46 states have a centralized UCR program. Agencies in the remaining four states report to the FBI directly. Each month the UCR program compiles and reviews each state’s data, but the statistics are not publicly available until the end of the following year. In addition to collecting the statistics, the UCR Program also creates annual reports for law enforcement and the public. The Multimedia Publications Group ensures that the information is effectively presented to the public by highlighting key findings and putting them in terms that are easy to understand.

The statistics provided by the Uniform Crime Reporting Program do have their limitations. The Summary Reporting System, which is used in the annual report, has been criticized for providing incomplete data.The Summary system’s hierarchy rule requires only the most significant offense to be recorded. The Summary system only tracks eight specific crimes that are grouped into two categories, violent crimes and property crimes. Statistics only detail the number of crimes known to law enforcement and only provide limited information about the nature of each offense. Law enforcement agencies and state UCR programs provide statistics voluntarily, as there is no federal reporting requirement for agencies. While the UCR Program audits state programs every three years, individual agency audits are voluntarily and cannot result in any form of punishment if statistics are inaccurate or incomplete. This essentially means that reporting practices are up to the discretion of each agency.

Despite its drawbacks, the UCR remains the most definitive source of crime information available. According to statistician and UCR Unit Chief Dr. Samuel Berhanu, “it is one of the richest data sets in this country,” and is one of the longest standing series of crime data in the entire world. Throughout the UCR Program’s lifespan, the FBI has a history of responding to criticism and improving its statistics. Recently, updates to the UCR are starting to happen at a much faster rate. As demand for more accurate and more frequent statistics grows, the FBI has responded with better definitions and new procedures that are more efficient.

One of most notable improvements is the redefinition of rape, which the Bureau expanded to record the crime more accurately. Many law enforcement agencies began using the new definition in January 2013, and the most recent Crime in the United States publication, released in November, marks the first full year statistics with the updated definition.

Further changes to the UCR Program include the addition of human trafficking and animal cruelty to the list of crimes in the Summary Reporting System. Significant expansions of hate crime definitions and reporting codes have also started to take effect. The FBI will now track hate crimes with gender and gender identity biases, seven new religious biases, and an anti-Arab bias. The new and improved definitions will allow law enforcement and the public to understand the nature of crime in the United States in unprecedented ways.

Even more changes are likely to come, as new recommendations are making their way through the FBI. There are two ways that changes to the UCR can occur: by legislation from Congress or internally through CJIS’ Advisory Policy Board (APB). The APB is divided into regional working groups that include representatives from states and localities. Changes from the APB are generally preferred by the FBI because the recommendations generally have law enforcement buy in.

The Advisory Policy Board has its second annual meeting this month where it will likely discuss several policy changes and additions. Two upcoming recommendations are the addition of cyberspace as an offense location and the creation of new policies and definitions for domestic abuse. Changes through the APB help ensure that law enforcement buys into the new procedures and that the changes reflect existing issues with reporting.

Although the UCR Program is undergoing several changes–both in terms of what is collected and how it is processed–important obstacles and limitations remain. When changes to the reporting system occur it typically takes a long time for individual agencies to implement them. In the meantime, inconsistencies exist between different states and even local agencies, making it harder to identify and interpret trends. Similarly, many criticize the available amount of information provided by the Summary Reporting System, as supplemental data is often limited and sometimes unavailable.

Criticism of the Summary Reporting System is longstanding, as scholars, the media, and the public have called for more accurate and informative statistics, but what you may not know is that a solution for many of these issues already exists.

The FBI approved the National Incident Based Reporting System (NIBRS) in 1991, and since then several law enforcement agencies have begun to implement the new comprehensive reporting system. The fundamental goal of the NIBRS is to collect a wide variety of data about each individual incident. NIBRS eliminated the hierarchy rule and collects information about each crime that occurs, even if they all happen at once. It also collects data about the relationship between the victim and the offender, the location of the crime, the time of day, whether a weapon was used, and much more. While the Summary System only uses nine categories for offenses, NIBRS has 22 offense categories with 46 specific crimes. As Blasher explains, “In Summary you know a crime occurred, in NIBRS you know a crime occurred, how it occurred, and a lot more of the specifics.”

However, despite the significant improvements that NIBRS can provide, it has faced its own set of obstacles. The most notable challenge is the fact that NIBRS has not been adopted by most law enforcement agencies. According to the 2012 NIBRS publication, there are 6,115 agencies that report statistics using the new system accounting for roughly 33 percent of all law enforcement agencies. Because so few agencies use NIBRS, the data that the system provides cannot provide any conclusions about trends on a national or state level.

The FBI and Bureau of Justice Statistics (BJS) has acknowledged the current limitations of the NIBRS data, and in 2012, they announced a plan to expand the system to make its findings nationally significant. A study conducted by the BJS found that a nationally representative sample could exist if the NIBRS program spread to 400 additional agencies. This means that if the additional agencies started using the new system then national trends could be identified without universal implementation of NIBRS. The National Crime Statistics Exchange (NCS-X) initiative sought to reach that goal by providing resources and assessments to help the selected agencies adopt the system.

The problem with NIBRS gets to a much larger issue with crime statistics on a national level, and it is not a problem with the FBI. Participation in the Uniform Crime Report is a voluntary decision made by individual agencies, and individual agencies set their own time frame for implementing new changes. Although the FBI works with agencies to implement changes, it is limited by the ability of each agency to comply with the new standards. There have been some notable advancements, as cities like Seattle have adapted NIBRS and created publications to help other agencies follow suit; however, a lot of work remains to bring agencies up to pace and to get the public the full data picture that it demands.