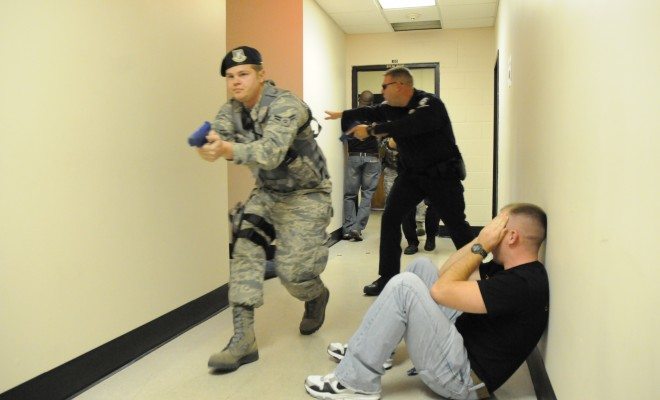 The rate of “active shooter” incidents has been increasing since 2000, according to a new study from the FBI in conjunction with researchers at Texas State University’s Advanced Law Enforcement Rapid Response Training Center. The study identified 160 incidents occurring between 2000 and 2013, and concluded that there were over twice as many of these shootings in the second half of that period as there were in the first.

In total, these incidents caused over 1,000 casualties — which the FBI classifies as both injury and death — leaving 557 injured and 486 dead, not including the shooters themselves. Among the study’s many important conclusions is the finding that police officers are often not able to respond in time, making civilian response extremely important.

It is important to note that active shooter situations are not the same as mass shootings. The agreed upon definition of an active shooter is “an individual actively engaged in killing or attempting to kill people in a confined and populated area,” though the FBI expanded it slightly for its research. In contrast to this definition, a mass shooting is an incident where a shooter kills three or more people.

Of the 160 total cases identified by researchers, 64 incidents or 40 percent would be classified as mass shootings. The distinction between “mass” and “active” shooter situations is small, but very important, as a person can be an active shooter without directly causing injury. Even the Wall Street Journal conflated the two, as the title of its coverage is “Mass Shootings on the Rise, FBI Says.”

James Alan Fox, a professor of criminal justice at Northeastern University, cautioned against the conclusion that mass shootings are increasing. In an interview with Time he said, “A majority of active shooters are not mass shooters… A majority kill fewer than three.” Fox went on to say that, if the study focused specifically on mass shootings it might not reveal an increase. Instead, he contends that the number of mass shootings have remained relatively steady since the 1970s.

While the findings about the rate of active shooter situations are important, the report’s primary purpose was to take a closer look at these incidents and their trends to see how law enforcement can better respond. The focus on active, rather than mass shooters is based on the underlying implication that the situation is in progress, meaning that law enforcement and bystanders may be able to influence the outcome.

One major finding about these situations is that they often end very quickly. In the 64 incidents where a duration could be determined, 44 ended in five minutes or less and 23 of those finished in just two minutes or less.

Equally important is the specific ways in which these incidents end:

“At least 107 (66.9%) ended before police arrived and could engage the shooter, either because a citizen intervened, the shooter fled, or the shooter committed suicide or was killed by someone at the scene.”

Additionally, over half of the situations (56%) ended on the shooter’s accord; the shooter either committed suicide, stopped shooting, or ran away. Also important is the fact that 21 incidents (13.1%) ended when unarmed citizens intervened, only two of which involved off duty law enforcement. Armed citizens were only involved in five incidents, four of which ended after armed security guards intervened, and only one ended after an armed civilian bystander engaged the shooter.

Also important is the location of these shootings. The three places with the highest rate of active shooter incidents are commercial areas (45.6%), educational environments (24.4%), and government properties (10%).

The study’s findings indicate that law enforcement may have a limited ability to respond to active shooters, as they typically end very quickly and before officers can arrive. However, they may also emphasize the importance of prevention and response training for citizens. Prevention remains the most important strategy for dealing with this problem, but the FBI’s recent emphasis on training may also help reduce the danger posed by shooters.