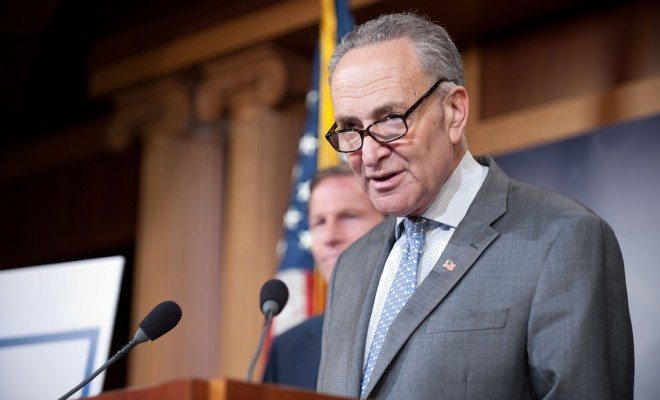 Are you a frat bro who misses the days when Four Loko had all the fun stuff in it? Blame Sen. Chuck Schumer (D-NY). Are you a Brooklynite who can suddenly no longer get unlabeled alcoholic slushies delivered to your door, no questions asked? Blame Schumer. And, are you still waiting for your pre-order of powdered alcohol to come in the mail? Once again, blame Schumer.

Yes, Schumer is directly responsible for blocking every single innovation in the alcohol industry from coming to market over the past half-decade. That brings the obvious question to mind: why is Schumer such a buzzkill? He insists that it’s all in defense of America’s youth, and in most cases he is probably right.

For example, Phrosties, which Schumer was partly responsible for making disappear, was a delivery service in New York City whose primary product was unmarked opaque bottles of mystery alcoholic slushies in the same colors as the lights at an Avicii show.

Imagine this in alcohol form.

These were obviously marketed toward children. The only way to order them was through Instagram and they resembled Hawaiian Punch more than an adult drink. One reviewer even stated that they tasted “like teenage regret.”

We think that sounds gross, too.

Admittedly, Schumer also had a pretty good point when it came to Four Loko.  For those of you who don’t remember 2010 (maybe you drank too much Four Loko), Four Loko was a canned beverage that mixed alcohol and caffeine. College students colloquially referred to it as “blackout in a can.” The caffeine would prevent drinkers from knowing when they were drunk, tricking them into drinking even more until they got dangerously sick.

Like this, but with a trip to the hospital.

The craziest part? One Four Loko had the alcoholic equivalent of five beers. Chuck Schumer, along with attorney generals from multiple states, quickly pressured the FDA to ban the beverage. It is now sold in a much less lethal form.

But, Schumer is plain wrong when it comes to powdered alcohol. Calling it the “Kool-Aid of teenage binge drinking,” Schumer recently demanded that the FDA halt the approval process for Palcohol, the company that makes powdered alcohol. Schumer claims that powdered alcohol can be easily concealed by kids at school dances, mixed in someone’s drink without his or her knowledge, and even snorted.

This video from Mark Phillips, founder of Palcohol, succinctly rebuts all of Schumer’s claims.

As you can see, the packaging for powdered alcohol is as big as four travel-sized bottles of vodka, so it is not any easier to conceal. It takes at least a minute to dissolve, so it is not a good way to spike somebody’s drink. And, unless you’re using your own homemade formula like this idiot at Vice.com, it would take an hour to snort one shot’s worth of powdered vodka. It would be painful and it wouldn’t get you drunk.

Regardless, powdered alcohol appears to be dead. The Bureau of Alcohol, Tobacco, Firearms, and Explosives (ATF) rescinded its approval of the product and the New York State Senate just passed a bill banning powdered alcohol from being sold.

The faces of fans of weird alcohol everywhere.

Schumer’s crusade against powdered alcohol has ruined what could have been a world changing invention. For consumers and businesses alike, the beverage and industrial formulations of powdered alcohol could have improved the way we live. Since powdered alcohol is lighter than liquid alcohol, shipping costs would be lowered, and the price would be cheaper. Airplanes could serve it instead of liquid alcohol, and maybe pass the weight savings on to the consumer in the form of lower ticket prices. It would also make it easier for law-abiding drinkers to travel with a refreshing drink. All of this adds up to fewer carbon emissions used to transport this product.

But, it’s the industrial formula that would really change the world. Phillips claims that multiple companies have requested information about powdered alcohol being used as a lightweight source of fuel, an essential ingredient in windshield wiper fluid, and as an antiseptic in a medical setting. Imagine how easy it would be to ship powdered alcohol to a disaster zone as opposed to having to ship heavy liquid. This invention could save lives.

Politicians are always saying that they want to pass laws that allow Americans to be innovative and entrepreneurial, so why is Schumer blocking Phillips from doing just that? Does Schumer really think the downsides of this product outweigh all of the positives?

I have another theory. You see, while Schumer claims to be leading the charge against the alcohol industry’s assault on our nation’s youth, he’s been taking a lot of donations from the industry’s leading names. According to OpenSecrets.org, Schumer received $155,000 from PACs and individuals associated with alcohol in 2010. That’s the same year he started his fight against Four Loko. Is it really a coincidence that Schumer received so much money from the industry right as he started fighting against a product that threatened to dip into its profits?

The two companies that gave Schumer the most money were SABMiller and Anheuser-Busch InBev. These are the companies that make Miller and Budweiser. They bowed out of the caffeinated alcohol game in 2008, so they had the most market share to lose from Four Loko’s success, and the most to gain from its demise. So, instead of competing fairly, they decided to buy influence in Washington.

Pictured: The CEO of SABMiller

Every mass producer of alcoholic beverages had something to lose from the emergence of powdered alcohol. It threatened to be a cheaper and more convenient option than the products they sold. I’m sure they breathed a sigh of relief when Schumer’s press release shut the product down, and I’m even more sure they will pay Schumer handsomely for his services.

So kids, remember, Chuck Schumer does not want you drinking scary kinds of alcohol. He and his campaign account would prefer if you drank a Bud Light instead.

Eric Essagof (@ericmessagof) is a student at The George Washington University majoring in Political Science. He writes about how decisions made in DC impact the rest of the country. He is a Twitter addict, hip-hop fan, and intramural sports referee in his spare time. Contact Eric at staff@LawStreetMedia.com.

Eric Essagof
Eric Essagof attended The George Washington University majoring in Political Science. He writes about how decisions made in DC impact the rest of the country. He is a Twitter addict, hip-hop fan, and intramural sports referee in his spare time. Contact Eric at staff@LawStreetMedia.com.
Share:
Related ItemsAnheuser-BuschBinge DrinkingBud LiteBudweiserCampaign FundingChuck SchumerDrunkFour LokoPhrostiesPoliticsPowdered AlcoholSABMillerSenatorWar ChestWashingtonYouth