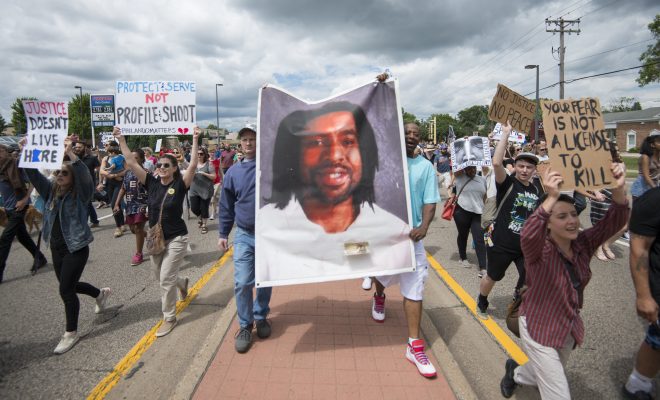 The officer who fatally shot Philando Castile during a traffic stop last July said the smell of “burnt marijuana” coming from the vehicle made him fear for his life. The weak justification comes from a newly released transcript of Minnesota police officer Jeronimo Yanez’s interview with two special agents from the Minnesota Bureau of Criminal Apprehension, the state agency investigating the shooting.

“I thought I was gonna die,” said Yanez when recounting the shooting the following day. “If he has the, the guts and the audacity to smoke marijuana in front of the five year old girl and risk her lungs and risk her life by giving her secondhand smoke and the front seat passenger doing the same thing then what, what care does he give about me.”

In other words, Yanez interpreted the smell of marijuana to mean that Castile had no regard for human life–a quantum leap, if I’ve ever heard one.

In the transcript, Yanez repeatedly mentions smelling marijuana in the car and claims it was on his mind at the time of the shooting. He said that because of the odor, he didn’t know if Castile had the gun “for protection” from a drug dealer or people trying to rob him. Make no mistake, Yanez’s prejudicial jump from possible pot user to criminal evading drug dealers is racially motivated, and he likely wouldn’t have come to that conclusion had Castile been white.

But more than half of American adults have admitted to trying marijuana at least once, and 22 percent of adults say they currently use marijuana. Numerous studies have shown that marijuana actually decreases aggression for many individuals. The majority of states have some kind of marijuana legislation–whether that be medical or recreational–on the books, and a growing number of states are actively advancing toward legalizing the drug recreationally.

While it is illegal to smoke marijuana without a medical license in the state of Minnesota, the drug is in fact decriminalized. Possessing 42.5 grams or less is a misdemeanor offense, carrying a no prison time and a maximum fine of $200.

Autopsy results concluded that Castile had high levels of THC in his system at the time of the stop, but it’s unclear whether he was impaired or not at the time. Still Yanez’s attorneys attempted to convince the judge that Castille was culpable in his own death because he was “stoned.”

“The status of being stoned (in an acute and chronic sense) explains why Mr. Castille: 1) did not follow the repeated directions of Officer Yanez; 2) stared straight ahead and avoided eye-contact; 3) never mentioned that he had a carry permit, but instead said he had a gun; and 4) he did not show his hands,” the lawyers wrote in a motion to dismiss the charges against Yanez.

Ultimately, Yanez was acquitted last week by a Minnesota jury on all charges in the shooting death of Castile, but the shocking conclusion still left much of the nation in a collective state of disbelief. Based on Yanez’s testimony, it appears clear that both racial prejudices and stigmas surrounding marijuana use factored into the tragic shooting.

Alexis Evans
Alexis Evans is an Assistant Editor at Law Street and a Buckeye State native. She has a Bachelor’s Degree in Journalism and a minor in Business from Ohio University. Contact Alexis at aevans@LawStreetMedia.com.
Share:
Related ItemsBlacklivesmatterJeronimo YanezMarijuanaMinnesotaOfficer-Involved ShootingsPhilando CastileTHC