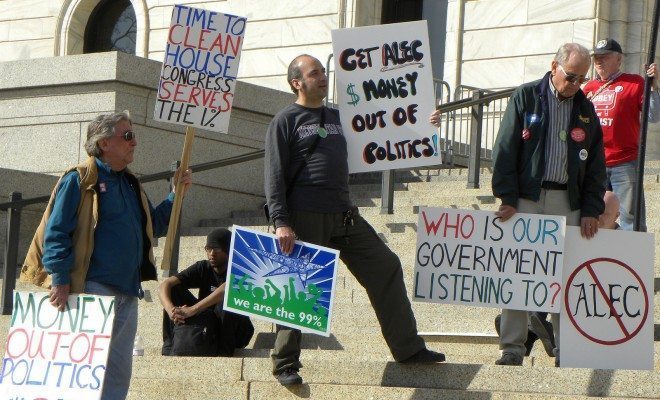 There are two primary lens through which the American public views lobbying. On one side you have those who favor lobbying and believe that a lobbyist’s expertise might grant a policymaker a different outlook on an issue. However, there also exists a group who views lobbying as unethical, and believes the pressure exerted by interest groups on politicians is enough to gain votes in favor of their corporate interests. This could create an issue granted that the interest group may not be lined up with constituents’ viewpoints. Moreover, lobbyists are often accused of using bribery and monetary threats to guide government actions. However a larger issue is imminent–many Americans are unaware of the full scope of these back room practices.

The American Legislative Exchange Council, known as ALEC for short, is a non-profit organization founded in 1973 under close scrutiny not only by the IRS, but by the American public. ALEC identifies itself as a group of conservative state legislators and private sector representatives that draft and share model state-level legislation for distribution among state governments in the United States. As noted by the company’s mission statement, ALEC “works to advance limited government, free markets, and federalism at the state level through a nonpartisan public-private partnership of America’s state legislators, members of the private sector and the general public.” While non-profit organizations such as the ACLU generally use their revenue to further enhance their mission or purpose with the benefit of not being federally taxed, ALEC has been accused by the IRS of taking advantage and abusing its tax-exempt status.

In April of 2012, Common Cause accused ALEC of being a lobbying organization, while objecting to ALEC’s tax status as a nonprofit organization, alleging that lobbying accounted for more than 60 percent of its expenditures.

Although ALEC formally denied lobbying, previous ALEC chairwoman Dolores Mertz expressed in the Daily Beast that  she was “concerned about the lobbying that’s going on, especially with [ALEC’s] 501(c)3 status.” Former Republican state senator and current vice chairman of the New Jersey Ethics Commission William Schluter, has also criticized ALEC in the past for its lobbying practices, telling nj.com,

When you get right down to it, this is not different from lobbying. It is lobbying… Any kind of large organization that adds to public policy or has initiatives involving public policy should be disclosed—not only their name, but who is backing them.

In fact, 2012 was not the only year ALEC was accused of taking advantage of its non-profit status. Most recently the organization has been discovered collecting money from lobbyists and corporations, and using the capital to subsidize costs for legislators to attend private “educational” meetings. Media Matters produced a video exposé on ALEC’s back room dealings and its results were truly outstanding. Not only did they find that legislators are wined, dined, and taken on golf outings; they are also given substantial wads of cash for miscellaneous purposes. What’s even more shocking are the decisions being made in the closed rooms, which the general public is denied access to.

During its investigation, Media Matters interviewed Georgia Senator Nan Orrock, a former ALEC member, who called ALEC a “corporate bill mill which cranks out legislation.” Moreover she divulged alarming information on the proceedings of the meetings wherein corporations and legislators have equal say on a piece of legislation.

The investigation  also uncovered that there are bills which need only initials by legislators and have been entirely drafted by corporations. One example is the Asbestos Claim Priority Act, which prevents asbestos victims from suing corporations. Noteworthy is the fact that although the bill passed in Georgia’s capital, it was first approved in Las Vegas, according to the video. Media Matters uncovered records indicating that three Georgia senators who sponsored the bill received over $22,000 in the year before, during, and after the bill was passed in “scholarship money” to attend resort meetings by ALEC.

For more detailed information on ALEC conferences please refer to this video.

In this context, the question arises of whether ALEC is complying with legal standards or not. Certainly the notion of filtering money between corporations and legislators through ALEC is not ethical, however do they breach any sort of law? It is tough to say granted that each state differs in terms of ethical rules and laws. Some states such as Wisconsin require legislators to fund their own trips to events. Other states, however, permit organizations such as ALEC to sponsor or grant “scholarships,” to legislators for said trips.

Regardless of whether any actual laws are being violated or not is yet to be determined, however it is clear that the operating system of the supposed NPO is being further observed not only by the general public concerned with fair legislative practices, but also larger actors. Mega corporations who once played a prominent role in ALEC, such as Coca-Cola, are showing their concern with the way ALEC handles legislative practices, as seen by Coca-Cola’s recent disaffiliation from the organization. It is only a matter of time before the continued allegations turn into large disputes, potentially leading to a landmark legal case.

Symon Rowlands
Symon Rowlands is a member of the University of Miami Class of 2016 and was a Law Street Media Fellow during the Summer of 2015. Symon now blogs for Law Street, focusing mostly on politics. Contact Symon at staff@LawStreetMedia.com.
Share:
Related ItemsALECAmerican Legislative Exchange CouncilCorporate PayLegislationLobbyingNon-ProfitPolitics