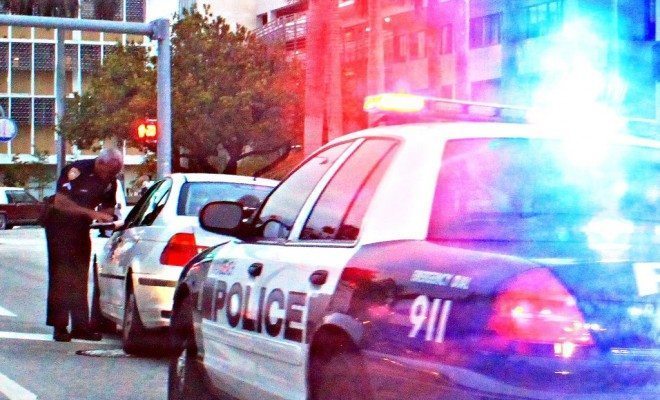 “Stop it with your mouth, stop it with your ‘For what, sir, for what, sir,’ stop it with that bullsh*t” screams the police officer, while mocking the driver’s foreign accent. That is how a recent three and half minute viral video begins, where a plainclothes NYPD officer is seen screaming at an Uber driver in what is being called by many a xenophobic rant.

The video was uploaded to YouTube Monday by Sanjay Seth, who was one of the Uber driver’s passengers. In it, Officer Patrick Cherry, an NYPD detective assigned to the Joint Terrorism Task Force, is seen berating the driver during a traffic stop yelling things like “I don’t know what f***ing planet you think you’re on right now” just before slamming the cab driver’s door walking back to his unmarked police car.

Seth explained his version of the events precipitating the verbal assault in the YouTube video’s description box writing:

In an unmarked car, the policeman was allegedly attempting to park without using his blinker at a green light. (His reverse lights weren’t on. Likely double parked without hazards on.) The Uber driver pulled around and gestured that he should use his blinker, casually and non-offensively, and kept driving us. The policeman aggressively pulls up behind us and this is what happens.

The city’s Civilian Complaint Review Board announced Wednesday that it would be working with the NYPD Internal Affairs Bureau to investigate the detective, after receiving a formal complaint about the incident. The reason why the incident is being handled by the complaint board, rather than a criminal investigation, is because it was determined that Cherry committed no other wrongdoing besides being “discourteous,” according to a source for the New York Daily News. It’s currently unclear what kind of punishment, if any, will be doled out following the board’s findings.

According to the New York Daily News, a police source also said the detective was on his way to work after visiting Detective Harry Hill at NYU Langone Medical Center when the interaction occurred. Hill is in critical condition after going into cardiac arrest during a procedure on his elbow on Thursday. Michael Palladino, president of the Detectives Endowment Association, elaborated, telling the New York Daily News that Hill’s medical condition has been an emotional burden for the Joint Terrorism Task Force, a unit that combines NYPD and federal anti-terror investigators. Palladino said:

The past five days have been emotionally draining for the members of the JTTF dealing with their fellow detective’s health. Despite what some people think, cops have feelings, too.

Even if Detective Cherry was in the middle of dealing with his “feelings” that does not give him the right to verbally abuse anyone just because they do something that he doesn’t like. This abuse of power is completely unacceptable, especially when police as whole are still struggling to overcome a general public distrust after months of controversy involving several cases of discrimination. Instead of offering an excuse for the behavior, Cherry needs to do some serious apologizing, possibly paired with some anger management counseling.