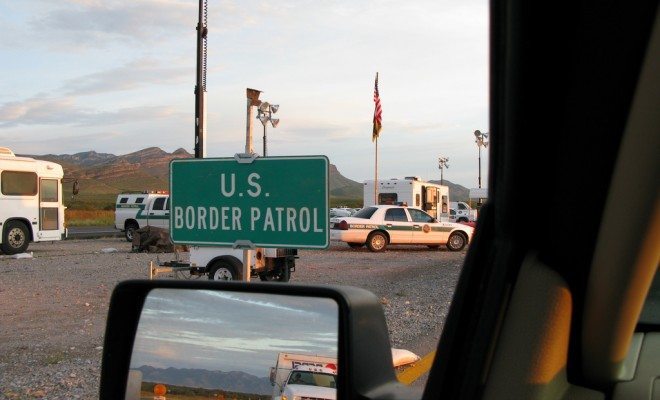 In Arizona, if you are within 75 miles of the Mexican border, you might just come across a “temporary” border control checkpoint. The goal of these checkpoints is to help control drug trafficking and stop illegal immigration. But the legality of these checkpoints, and what the Border Patrol agents are actually allowed to do is far from clear. The American Civil Liberties Union has now filed an administrative complaint with the Department of Homeland Security on behalf of 15 individuals who claim that their constitutional rights have been violated at checkpoints in Arizona.

Of the individuals involved in the ACLU complaint, the majority say they were never asked about their identity, the supposed purpose of the checkpoints. Some of the complainants claim they were held for over half an hour for not giving the Border Patrol officer consent to search their cars. Other complaints include a gun being pulled on a individual, and the Border Patrol agents attempting to take someone’s cell phone. If these allegations are true, they most likely violate the existing laws on checkpoints.

The highest court of the land has only ruled on interior checkpoints once, almost forty years ago, in United States v. Martinez-Fuerte. Amado Martinez-Fuerte was transporting two illegal immigrants when he was stopped at a fixed interior checkpoint in Southern California. When asked, the two illegal immigrants admitted to their status. Martinez-Fuerte reacted by suing, saying that the checkpoint violated his Fourth Amendment right to not be subject to unreasonable searches. SCOTUS ruled that his rights were not violated, because if there is a reasonable collective suspicion, then individuals can be searched in the interest of public safety. The court stated that Border Patrol agents could briefly question and ask people for identification, without individual suspicion, if they’re at reasonably located checkpoints. The court did not give the Border Patrol the right to search vehicles or occupants without probable cause. The question in Arizona today is if the Border Patrol is abiding by this ruling.

It seems like this administrative complaint may lead to a new look at our laws. These checkpoints have expanded their focus to include more work in drug control, instead of just looking for illegal immigrants. This is problematic because Martinez-Fuerte only serves as a precedent for checkpoints searching for illegal immigrants. Currently at checkpoints, vehicles are examined by drug-sniffing dogs. In Illinois v. Caballes, the Supreme Court ruled that a drug-sniffing dogs could be used during a routine traffic stop, but no court has explicitly ruled that they can be used at Border Patrol checkpoints.

Furthermore, in 2000, the Supreme Court ruled that using these checkpoints for general law enforcement acts violates the Fourth Amendment. James Duff Lyall, the attorney who filed the complaint stated:

The restrictions in the Martinez-Fuerte ruling don’t mean that agents have to turn a blind eye to obvious evidence of drugs or crime, but if you have cases where people are not even being asked about residency status, it raises serious questions about the legitimacy of these checkpoints.

In 1976, the Supreme Court made the Martinez-Fuerte ruling because they felt that in an area with a high number of illegal immigrants, it was not unreasonable to have ID checkpoints on major roads. Using that logic as precedent, I think that it could be argued that due to the large amount of narcotics crossing the border, it is not unreasonable to have cars drive through a checkpoint where drug-sniffing dogs are present. However, there’s no legal basis for that argument yet, and this is not an excuse for the unreasonable searches that the ACLU is alleging are taking place. If the point of these checkpoints is to find drugs, a car should only have to stop for a few moments while the dog sniffs, and then be allowed to move on. Anything beyond that, or a simple examination of a person’s ID, is a violation of the Fourth Amendment. The Border Patrol in Arizona needs to realize this if they want to keep operating their checkpoints.