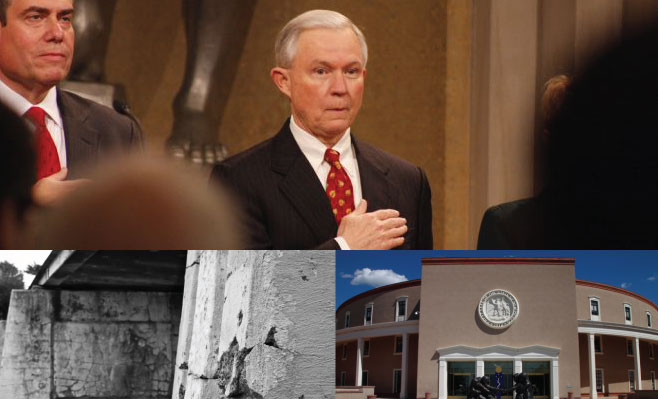 Happy Presidents Day! For those of you lucky enough to have the day off from school or work, grab a coffee, put your feet up, and catch up on Law Street’s best of the week below.

Marijuana advocates have been worried for months about the recently confirmed Attorney General Jeff Sessions. He once said “good people don’t smoke marijuana,” and he has joked that he thought the Ku Klux Klan “were OK until I found out they smoked pot.” But last week, Sessions spoke with Sacramento County Sheriff Scott Jones, and may have finally hinted at how he might enforce the federal marijuana ban as attorney general.

Last week, nearly 200,000 Californians were asked to evacuate their homes after workers at the Oroville Dam noticed the emergency spillway was severely damaged. The spillway was activated in response to rapidly rising water levels in the Oroville reservoir. While the dam was never in danger of collapsing, the failure of a vital failsafe and the subsequent mass evacuation serves as a reminder of the dire state of American infrastructure.

A new law passed by the New Mexico Senate Monday is seeking to expand the state’s existing medical marijuana program to include more qualifying conditions following rising demand. New Mexico’s medical cannabis program was established in 2007. As the law stands, patients with qualifying conditions–such as HIV/AIDS, Crohn’s disease, Lou Gehrig’s disease, PTSD, arthritis, and more–can obtain a medical marijuana permit from their doctors. If the recently introduced law passes a vote by the House of Representatives, 14 more qualifying conditions would be added to the existing list. This would include patients who suffer from substance abuse disorders.

Alexis Evans
Alexis Evans is an Assistant Editor at Law Street and a Buckeye State native. She has a Bachelor’s Degree in Journalism and a minor in Business from Ohio University. Contact Alexis at aevans@LawStreetMedia.com.
Share:
Related ItemsBest of the WeekICYMIIn Case You Missed ItJeff SessionsMedical MarijuanaNew MexicoOroville Dam