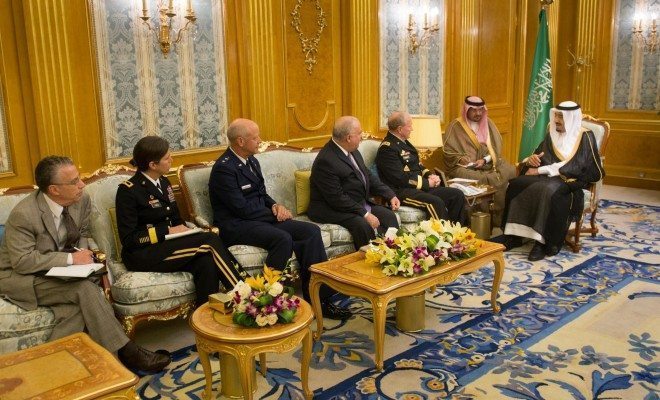 Saudi Arabia: Succession in the Chaos

A few weeks ago, Saudi Arabian monarch King Abdullah died. At the time of his death Abdullah was 90 years old, which made him the oldest living sovereign. While his country’s place on the world stage has changed dramatically over the course of his life time, his death leaves many questions unanswered. Read on to learn about the Saudi monarchy, and the problems plaguing the new ruler.

The site of modern day Saudi Arabia has been settled in some form for approximately 20,000 years. The region was a key trading corridor for the ascending civilizations of the Nile Valley and Mesopotamia, following the invention of agriculture.

The area’s first era of prestige, however, came hand in hand with the founding of Islam. Two cities, Medina and Mecca, located in present day Saudi Arabia, served as two of the birthplaces of Islam. They remained vital and began attracting thousands of pilgrims as the Muslim world expanded from North Africa to China.

The first developments of modern Saudi Arabia came in the seventeenth century when Shaikh Muhammad bin Abdul Wahhab and Muhammad bin Saud formed an agreement promising to return to the original teachings of Islam, which culminated in the first Saudi state. The state proved prosperous and quickly covered much of what is now modern day Saudi Arabia. However, this prosperity drew the attention of the Ottoman Empire, which crushed the aspiring nation in the early nineteenth century. A second Saudi state was established soon after, but also met a similar fate. This time the current patriarch, Abdul Rahman bin Faisal Al-Saud, was forced into exile in the Empty Quarter, a desert region in the east, before finally fleeing to modern day Kuwait.

Faisal Al-Saud’s son, Abdulaziz, began to reverse the family fortune, when in 1902 he led a daring raid into the current capital of Riyadh, and with a small force was able to take over the city. Abdulaziz gradually reestablished control over the whole territory, two of his most symbolic conquests being of Mecca and Medina in 1924 and 1925, respectively. Finally, the modern nation of Saudi Arabia was established in 1932 by its first monarch, the same Abdulaziz Al-Saud.

The Road to Succession

King Abdulaziz wanted one of his sons to succeed him on the throne; however, he had approximately 45 sons from which to choose. Thus it is no surprise then, that every ruler of Saudi Arabia since the death of Abdulaziz has been one of his many sons. This trend continued, as the recently deceased King Abdullah was succeeded by another of his brothers, Crown Prince Salman. The next in line after Salman is his brother, Crown Prince Muqrin.

While so far all of Abdulaziz’s successors have been one of his sons, this is likely to end soon. Crown Prince Muqrin is the youngest of Abdulaziz’s sons, but youngest is a relative term, as he is in his sixties. Therefore, if he actually ever ascends to the throne of Saudi Arabia, Muqrin is likely to be the last son to do so. The next ruler of Saudi Arabia after Muqrin therefore, assuming he outlives all his brothers and half-brothers, is one of the many grandsons of Abdulaziz.

While the proverbial changing of the guard has the potential to cause trouble, since the death of Abdulaziz the line of succession has never been an issue. Power has continued to pass down the line of brothers. The only change to the succession formula in fact, was the creation of the deputy crown prince position, formerly occupied by Prince Muqrin, which was put in place precisely because all of Saudi Arabia’s leaders are so old.

The smoothness of the succession process can be attributed partly to this familiar formula, as well as the Allegiance Council, which was created by King Abdullah in 2006. The council, made up of his brothers and nephews, is responsible for deciding the next monarch.  While the sons of Abdulaziz still reign, the council has a smaller pool to choose from, however once the next generation rises to prominence, the decision of the council could be potentially much more difficult politically.  For now though, the council followed the traditional track and declared Salman, the oldest living son of Abdulaziz, the new king and Prince Muqrin his successor. The video below summarizes this succession process.

Challenges for the New King

While the succession to Saudi Arabia’s throne seems clear, the challenges facing King Salman are anything but. The first and most obvious problem plaguing Saudi Arabia is how to handle plummeting oil prices. In November, contrary to conventional wisdom, OPEC, which is dominated by Saudi Arabia, decided not to cut production even as prices were already dropping dramatically.

The reason why the Saudis may be willing to flood the market with cheap oil is geared more to the long run. By driving costs so low, the Saudis can put many of their competitors, such as upstart fracking operations, out of business, because the cost to access the oil is more than it is being sold for.

Not only may Saudi Arabia be forcing the price of oil down to eliminate its competition, there are also political factors at work. There’s a worry that Saudi Arabia has been working behind the scenes with Russia, a country that cannot afford low oil prices, offering to decrease production that would then raise prices again. In return, the Saudis would most likely want Russia to rescind its support for the regime of Assad in Syria.

Regardless, as the landscape of the global oil market changes, the role that the Saudis play in it will continue to change. How King Salman handles the oil market is certainly something to watch.

ISIS, or the Islamic State in Iraq and Syria, is a terrorist organization that has carved out a large swath of territory for itself in Iraq and Syria, and whose ultimate goal is to establish a new caliphate. ISIS’ goals pose several problems for Saudi Arabia.

First, the areas under its control are close to the eastern regions of Saudi Arabia where a large number of Shi’ites reside in the predominantly Sunni nation. This is also the part of the country where Saudi oil is centered. The Saudis are wary of ISIS rhetoric creating discontent in the Saudi Shi’ite community, especially if it affects oil production.

Second, as part of ISIS’ would-be caliphate, it would have to conquer the two holiest places in Islam, Medina and Mecca. These two places are both located inside Saudi Arabia, meaning ISIS would have to invade the nation at some point if it hopes to rule either site.

Not surprisingly then, Saudi Arabia has already joined the coalition, led by the United States, which has riddled ISIS with constant airstrikes; however, unlike most other Muslim countries, Saudi Arabia has gone even further, attacking ISIS in Syria and even allowing the U.S. to train Syrian insurgents within its borders.

Aside from attempting to undermine ISIS, Saudi Arabia’s efforts in Syria are also calculated to inflict damage on a proxy state of its chief rival. Saudi Arabia has already poured large amounts of resources into the fight in Syria in the hopes of deposing Assad, viewed to be a client of Iran. However, the proxy war between the two extends far beyond Syria.

The recent coup in Yemen, located on the southwest border of Saudi Arabia, was led by a group known as the Houthis. This group is also purportedly under the influence of Iran. The interference of both Saudi Arabia and Iran in the affairs of their neighbors have led to a sort-of proxy war between the two powers.

While neither side can claim victory yet, geographically Saudi Arabia finds itself encircled. Normally this would not be too serious as Saudi Arabia traditionally has had the support of the US, the strongest military power in the world.

Recently though the strength of this relationship has come into question. U.S. talks with Iran over nuclear weapons have begun. While Saudis may fear the talks could lead to a closer relationship between the two, if Iran were to instead to go nuclear that could also have major consequences for the region and the proxy conflict. It is widely assumed that if Iran does go nuclear, Saudi Arabia will quickly follow suit, acquiring weapons from Pakistan whose program it originally helped fund. King Salman must prepare for that possibility.

Lastly, the new monarch of Saudi Arabia must consider what is going on inside the kingdom itself. Although government did very well in preventing the mass protests that plagued other nations during the Arab Spring, it can’t just throw money at all its problems. The list of potential problems is extensive, including human rights violations, xenophobia, and discrimination against women and non-Muslims. While these problems have yet to flare up, there certainly exists the potential for them to do so.

Domestically, the situation in Saudi Arabia is unlikely to change dramatically. While the late King Abdullah made some minor changes, the established order remains virtually unaltered. That is an order in which women are second-class citizens and wealth is concentrated among the few. For this to change anytime soon, Saudi Arabia would probably require some strong external pressure forcing it to alter the country’s way of thinking.

Following the death of King Abdullah, many experts have speculated there could be a succession crisis in Saudi Arabia; however, as of right now the succession seems to be about the only thing that won’t present problems in the future.

That is about the only well-established factor currently in the nation. While the succession is clearly laid out, Saudi Arabia has a number of other concerns: dropping oil prices, ISIS, its proxy war with Iran, and unrest among its own people. These concerns are only further exacerbated by the U.S.’s waning commitment. Thus while choosing a new king was relatively easy, maintaining the kingdom of Saudi Arabia may be potentially much more difficult.

BBC: Saudi Arabia: Why Succession Could Become a Princely Tussle

Al Jazeera: The Question of Succession in Saudi Arabia

Daily Star: For Saudi Arabia Problems Abound All Around

Economist: Why the Oil Price is Falling

Business Insider: The Saudis Floated the Idea of Higher Oil Prices to Get Russia to Stop Supporting Assad in Syria

Al-Jazeera: Saudi Arabia, Iran and the ‘Great Game’ in Yemen

Guardian: Iranian President Says Nuclear Deal With the West is Getting Closer

Michael Sliwinski
Michael Sliwinski (@MoneyMike4289) is a 2011 graduate of Ohio University in Athens with a Bachelor’s in History, as well as a 2014 graduate of the University of Georgia with a Master’s in International Policy. In his free time he enjoys writing, reading, and outdoor activites, particularly basketball. Contact Michael at staff@LawStreetMedia.com.
Share:
Related ItemsIranISISIslamKing SalmanMiddle EastPoliticsSaudiSaudi ArbiaShia IslamSuccessionYemen