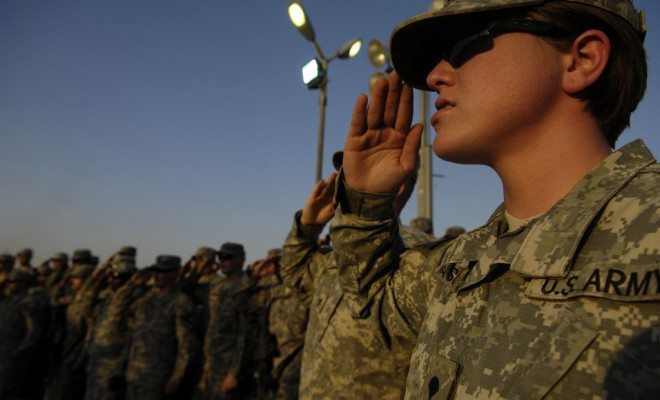 The Women in Combat Debate Continued: Should Every Door be Opened?

Two incredible women made history when they passed the Army’s elite Ranger School last Friday. Rangers make up an exceptionally trained unit of the Army comparable to the Navy SEALs. The graduation re-sparked the national debate over the ability of women to take on combat roles. To be clear, today women are located on the front-line, but some positions are still off-limits. Critics call the practice unfair and sexist while supporters dismiss those labels entirely. Is the current system in place justifiable? Or should women be given the opportunity to fill any position?

Capt. Kristen Griest and 1st Lt. Shaye Haver are the first female soldiers to graduate Ranger School–one of the most grueling training courses that the Army has to offer. The Pentagon describes Ranger School as “the Army’s premier combat leadership course, teaching Ranger students how to overcome fatigue, hunger, and stress to lead Soldiers during small unit combat operations.”

Army Rangers are trained to lead soldiers on difficult combat-related missions. They are specifically trained for close combat and direct-fire battles. Candidates must pass three phases of Ranger School: Crawl, Walk, and Run. The Crawl phase, lasting 20 days, focuses on physical and mental development. The Walk phase, lasting 21 days, is conducted in the mountains and focuses on military mountaineering tasks. And the Run phase further develops combat-arms functional skills under extremely stressful environments.

When the class began in April, there were 381 men and 19 women. The class finished, 62 days later, down to 94 men and two women. Each graduate had to pass a physical fitness test that requires:

On a trial basis, this was the first year that the Army allowed women to participate in Ranger School. Although they could train, Capt. Griest and Lt. Haver still cannot apply to the 75th Ranger Regiment with their fellow classmates. A follow-up decision on the specific roles that women can have in combat is expected by the end of the year. In 2013, the U.S. Military officially lifted the 1994 ban on women in combat roles. In addition, former Defense Secretary Leon Panetta initiated a three-year project in 2012 calling for all branches to fully integrate women in combat roles by 2016, or request a special exception.

Despite the ban for certain combat roles, women served on the war front in Iraq and Afghanistan. Women can hold jobs on gun crews, air crews, and in seamanship specialties. U.S. military women accounted for 67 combat deaths in Iraq and 33 in Afghanistan; those wars also saw more than 600 and 300 female injuries, respectively. Two military women were held prisoner in Desert Storm and three in Operation Iraqi Freedom.

Women are represented in leadership positions as well. Women make up roughly 14 percent of the enlisted ranks and 16.6 percent of the officer corps. More than seven percent of all generals and admirals are women–with 28 generals in the Air Force, 19 in the Army, one in the Marine Corps, and 21 admirals in the Navy. Nearly 20 percent of female enlisted reservists and National Guard officers are women. According to the Department of Veterans Affairs, there were 1,853,690 female veterans in the United States as of September 2011.

The main argument against expanding the role of women to new combat positions focuses on their physical capabilities. Many critics argue that their opinions have nothing to do with sexism and that they have the fullest respect for women in the armed forces. But when it comes down to it, women are not as strong as men. Male muscles and bones are denser. Critics argue that the endangerment of team members isn’t worth the military being politically correct. As Brig. Gen. George Smith explained on “60 Minutes,” “The realities of combat aren’t going to change based on gender.”

In 2012, the Marine Corps opened its Infantry Officer Course to women on a trial basis, which is similar to the Ranger training. While 29 women have attempted the course, none have passed so far. Only four women passed the combat endurance test held on the first day. This includes, for example, a 25-foot rope climb with a heavy backpack full of gear. You must reach the top to pass. An imbalance in strength allows for differences between men and women in the Marine Corps basic physical fitness test. For example, a woman can perform fewer pull-ups than her male counterpart. Today 45 percent of female Marines can complete three pull-ups, the requirement for male testing.

The standards are high, and that is yet another argument against full integration. If you lower the standards to allow women to pass, you elevate the risk in the field. Chairman of the Joint Chiefs of Staff General Martin E. Dempsey, the nation’s top military officer, started to question these high standards two years ago. He claimed,

If we do decide that a particular standard is so high that a woman couldn’t make it, the burden is now on the service to come back and explain to the secretary, why is it that high? Does it really have to be that high?

In other words, the Marine Corps Officer Course, along with other courses of similar intensity, will now have to justify current standards. However, there are those that don’t accept that argument. Retired Marine Corps Officer Dakota Wood believes they have “decades of experience on which to base requirements.”

Women have time and time again proved their worth on the front-line. They have exhibited poise and efficiency under fire. A main concern, however, is longevity. Capt. Katie Petronio, a former combat engineer officer on deployments to Iraq and Afghanistan, returned from deployment with new concerns about women in combat zones. She asks,

Can women endure the physical and physiological rigors of sustained combat operations, and are we willing to accept the attrition and medical issues that go along with integration?…Five years later, I am physically not the woman I once was and my views have greatly changed on the possibility of women having successful long careers while serving in the infantry. I can say from firsthand experience in Iraq and Afghanistan, and not just emotion, that we haven’t even begun to analyze and comprehend the -specific medical issues and overall physical toll continuous combat operations will have on females.

With a similar viewpoint, Retired Marine Gunnery Sergeant Jessie Jane Duff links the ban on women in combat roles to women in the NFL. She told Business Insider:

There’s simply too great a disparity in body mass and strength between NFL players and women, and the physical demands are too great… Currently, women have higher rates of discharge for medical disability that prevents them from finishing their enlistment, or re-enlistment. Stress and muscular deterioration in women come on faster and harder due to the heavy gear and physical duress in the field environment.

Put simply, physical deterioration ultimately occurs more in woman than it does in men.

When it comes to strength and standards, the counterargument seems obvious: keep the standards universal. If you don’t lower the standards and keep everything even for men and women, then that should silence critics at least against the physical arguments. Keeping standards high will remove sex from the equation.

Even though no women have passed the Marine Corps Infantry Officer Course, 150 women did graduate from the Marine Corps Infantry Training Battalion Course at the School of Infantry in North Carolina. These women passed with the same standards as the men. Marine Corps Spokeswoman, Capt. Maureen Krebs explained that even though basic physical fitness tests may allow different expectations, they are “separate from standards that must be met for a particular occupation, such as infantry, where women must achieve the same as men.” In other words, everyone meets the same standards to graduate.

Although a woman hasn’t yet passed the Officer Course, that doesn’t mean it won’t happen in the future. Allowing women to perform any combat role doesn’t provide a free pass. A woman will have to earn it like any male counterpart. That could still mean zero female Marine Corps Officers, for example, but at least they get a shot at it. As for medial concerns, extra pre-training for muscle building can be required to reduce female injury rates.

The two women who graduated from Ranger School certainly reignited the debate, but it’s been a controversial conversation that has existed for years. Both sides have sticking points to their arguments, but there is a resolution in sight. The Pentagon will release a final statement settling the issue after careful analysis of the research, perhaps solving the question once and for all.

Business Insider: There’s A Big Unknown About Putting The Female Body In Combat

CNN: History in the Making

The Guardian: Women in Combat

StatisticBrain: Women in the Military Statistics

CNN: By the Numbers

Jessica McLaughlin
Jessica McLaughlin is a graduate of the University of Maryland with a degree in English Literature and Spanish. She works in the publishing industry and recently moved back to the DC area after living in NYC. Contact Jessica at staff@LawStreetMedia.com.
Share:
Related ItemsAfghanistanArmyCombatIraqU.S. ArmyWomen