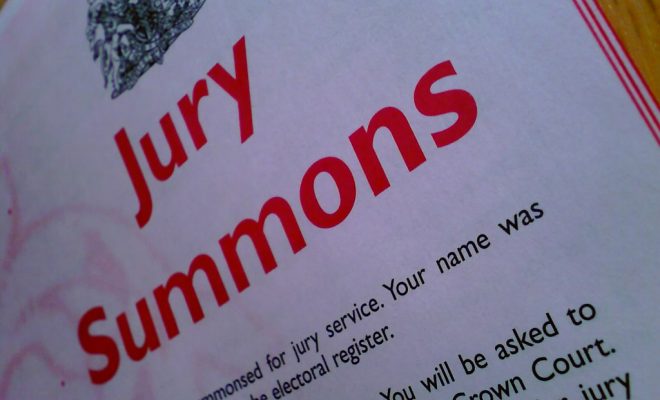 What is Jury Nullification?

Many of us have received it at one point or another—the dreaded jury summons. You arrive home, collect your mail, and get the letter mandating that you show up at a particular courthouse at a given date and time. Many of us see jury duty as a necessary inconvenience—serving on a jury is part of our civic duties, but it absolutely can be an annoying interruption to our daily lives. And most people think being on a jury is incredibly simple—if you’re selected, it’s your job to determine guilt or innocence based on the facts, evidence, and testimony you’re shown. But what many people don’t realize is that guilt and innocence, as they are currently defined, are far from the only options. There’s one particularly controversial option open to juries that you may have never heard of: jury nullification. Read on to learn about jury nullification, what it is, and why it’s important to the American justice system.

Jury nullification is essentially when a jury decides to acquit a defendant not because the evidence indicates that they were innocent, but because they disagree with the law or the harshness of the punishment the law mandates. Sometimes this is done to make some sort of political point; sometimes it happens on an individual basis. For example, imagine you have a woman, in a state where medical marijuana is illegal, who has purchased marijuana to give to her sister who has cancer and is suffering from nausea. If the buyer is caught, she could be charged for her crime—in this case, purchasing marijuana. There may be all the evidence in the world to indicate that she did buy the marijuana. In fact, the jury may believe beyond a reasonable doubt—the burden in a criminal case—that she is guilty of purchasing marijuana. But, if the jury believes that purchasing marijuana for medical reasons shouldn’t be against the law, or that the punishment that the woman would receive for purchasing marijuana is unduly harsh, they can still recommend an acquittal. At the most basic level, jury nullification means that a jury has chosen to acquit a defendant, despite believing that the defendant is guilty beyond a reasonable doubt.

Jury nullification is possible in the United States based on a few different principles. For one, if someone is acquitted of a crime, per the Fifth Amendment’s Double Jeopardy Clause, they cannot be tried again. Jury nullification is also possible because juries cannot be punished for the decisions that they make (although someone who becomes part of a jury with the intent to push jury nullification or in some other way not uphold their duties can technically be prosecuted, however rarely.) But generally speaking, for ethical reasons, juries cannot be punished for the decisions they come to, or the important American principle of being judged by a jury of your peers would simply be moot. Additionally, judges cannot direct a verdict of guilt, the way that they can a verdict of innocence if the evidence doesn’t match the conviction.

It’s difficult to actually quantify the number of acquittals that stem from jury nullification. Juries are never under any sort of obligation to explain why they have come to the decisions that they did—although individual jurors may speak about their opinions, if they so wish. Some researchers have attempted to study the subject, and indicate that jury nullification most likely plays a role in fewer than 10 percent of cases, but there’s no real way to pinpoint exactly which cases were affected by jury nullification.

One thing that could contribute to jury nullification’s relative obscurity is that it’s in many ways a well-kept American secret. In fact, most people seemingly don’t know that it’s a possibility, and they almost certainly aren’t told about it while serving on a jury. An 1895 Supreme Court decision, Sparf v. United States, found that jurors aren’t guaranteed any sort of Constitutional right to be told about jury nullification. In many cases, attorneys will actively try to avoid seating jurors who may know about jury nullification by asking roundabout questions along the lines of: “do you have any beliefs that might keep you from making a decision purely on the basis of the law?”

While a juror cannot be punished for an acquittal, people can get in trouble as a consequence of jury nullification. One high-profile instance involved a man named Julian P. Heicklen, a retired chemistry professor who was an advocate for jury nullification. He was charged with jury tampering in 2011. He used to stand outside of a federal courthouse in Manhattan and hand out pamphlets about jury nullification, brandishing a sign that said “Jury Info.” He didn’t target any particular jurors, rather attempted to hand the pamphlets to anyone who walked by his station. The charges against Heicklen were dismissed in 2012, but the idea that informing people about jury nullification could be tantamount to jury tampering isn’t too far-fetched to imagine.

Specific Cases of Jury Nullification in the United States

Jury nullification has a long history in the United States. In fact, an early and well-known example actually predates the nation. In 1735, a man named John Peter Zenger printed articles that criticized the colonial British government. Zenger lived in the colony of New York, and it was against the law for him to publish anything without governmental approval. As a result of his controversial publications, he was charged with libel. Despite the fact that there was no question about whether or not Zenger had written the articles—he actually presented an affirmative defense in which he admitted that they were his work—the jury acquitted him.

Throughout American history, there have been other notable instances in which jury nullification is believed to have been used. Some were seemingly noble; others were almost certainly not. The Fugitive Slave Act was updated in 1850 to prescribe up to six months in prison for anyone who was found guilty of helping fugitive slaves escape. It’s widely believed that some of the acquittals that came out of that era came from abolitionist jurors essentially practicing jury nullification. On the other hand, there’s also evidence to suggest that jury nullification popped up in the Jim Crow-era south with some amount of frequency, when all-white juries chose not to convict white defendants who were accused of violence against black citizens.

There have also been recent cases of suspected jury nullification involving public figures. Washington D.C. Mayor Marion Barry was acquitted of 13 out of 14 drug charges, despite overwhelming evidence, including a videotape of Barry smoking crack cocaine. Barry’s lawyers argued that he was entrapped by the federal government. Barry, a longtime civil rights leader, was very beloved in D.C. and it was a popular belief in the nation’s capital at the time that he was targeted for his political stances and his role as one of the nation’s most prominent black elected officials.

Perhaps one of the most well-known suspected cases of jury nullification is O.J. Simpson. Although many of the jurors involved in that decision have come forward to say that they were compelled by the evidence presented by Simpson’s defense attorneys, Simpson’s attorney, Johnnie L. Cochran, was accused of hinting at the concept of jury nullification in his closing argument by the prosecutor in the case, Marcia Clark.

Other suspected jury nullification situations include the cases of Dr. Jack Kevorkian, the controversial physician-assisted suicide advocate who killed patients he deemed to be terminally ill; Lorena Bobbitt, the woman who cut her husband’s penis off after she claimed he raped her; and Oliver North, the NSA staff member who claimed responsibility for the sale of some weapons to Iran during the Iran-Contra affair.

While it’s obviously next to impossible to know exactly why juries chose to acquit Barry, Simpson, Kevorkian, Bobbitt, North, and many others, jury nullification was suspected based on the amount of evidence damning the defendants, and the decision on the jury’s part to acquit despite that evidence.

While serving on jury duty may not be the most glamorous of activities, it is often viewed as one of the most noble civic duties each American is beholden to. But, guilt and innocence aren’t always as black and white as they seem on “Law & Order.” In many cases, jurors take moral issue with the convictions they’re asked to participate in. That’s where jury nullification sometimes comes in. While advocates argue that it’s a way for jurors to protest unfair laws, detractors argue that it makes an unfair playing field for those accused of the same crimes, and can sometimes be used for nefarious or heavily biased purposes. But while jury nullification is somewhat of a well-kept secret, it sometimes makes its way in to the spotlight—often in cases that are beholden to the court of public opinion.

Anneliese Mahoney
Anneliese Mahoney is Managing Editor at Law Street and a Connecticut transplant to Washington D.C. She has a Bachelor’s degree in International Affairs from the George Washington University, and a passion for law, politics, and social issues. Contact Anneliese at amahoney@LawStreetMedia.com.
Share:
Related ItemsCivic DutyConstitutionJuryJury NullificationMarion BarryOJ Simpson