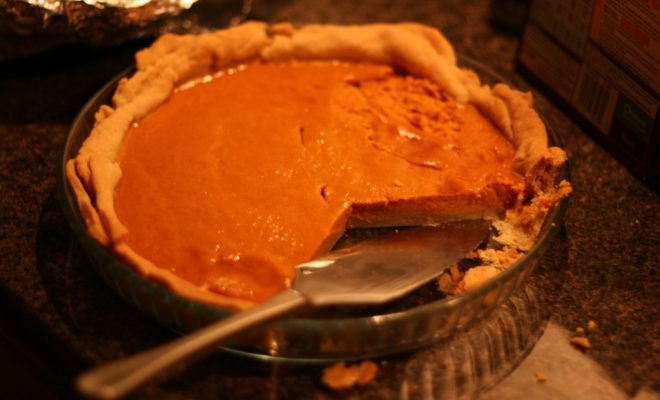 This is Why You’re Sleepy at Thanksgiving (Hint: It’s Not the Turkey)

Every Thanksgiving, you might put down your fork for few seconds to ponder some puzzling mysteries. How did I eat this much? Why can’t I stop thinking about pie? Why should I bother laboring with fresh cranberries when cranberry sauce comes in an easy-to-open can?

We know you’d rather keep eating than answer these questions, so we’ve answered them for you. Here are some of Thanksgiving’s greatest mysteries explained by science.

Home chefs across the nation aim to achieve that perfect golden turkey. They may not realize the same reaction that makes turkey’s skin golden also makes your skin golden when you apply self tanner: the Maillard reaction.

The Maillard reaction describes the interaction of sugars and amino acids that makes meat turn brown and tasty. When cooking a turkey, the heat catalyzes a reaction between simple sugars and amino acids and produces melanoidins. These chemical compounds give the turkey that beautiful golden skin. When applying a self tanner, the dihydroxyacetone (DHA) replaces the heat to catalyze the process. DHA reacts with the amino acids found in your dead skills cells to create a glowing (and sunless) tan.

This infographic from Compound Interest explains the chemistry of a fake tan:

Why does anyone bother making cranberry sauce from scratch?

It turns out that fresh cranberries are incredibly good for you. Keep these points in mind the next time you’re tempted to turn to a can.

But before we make the other Thanksgiving dishes jealous by praising cranberries too much,  let me ask just one question:

Have you ever eaten an unsweetened cranberry?

If not, suffice to say they rely on sugar as much as your neighborhood donut shop. But they have a wealth of other remarkable qualities that make their bitterness easy to forgive and explain why many people take the time to make cranberry sauce from scratch.

How did you eat so much?

You thought you were taking just a little bit of everything, but when you look at your plate, you realize the sum of its parts equals far more than a typical dinner. There’s no way you’ll eat it all.

Less than an hour later you’re staring at an empty plate. How did this happen?

It happened because of sensory specific satiety, the idea that your stomach (or really your brain) makes selective room for new flavors.

Humans evolved to eat a variety of foods, ensuring a full range of nutrients. You think you’re stuffed after eating a bowl full of spaghetti but when someone plops a piece of chocolate cake on your plate, you tuck in without hesitation. Your fullness caves to cravings for something new.

The Guardian quotes Laurent Brondel from the European Centre for Taste Sciences, asserting that even something as simple as a condiment can create the flavor variety that keeps you eating.

The more variety, the more you can eat. And the typical abundance of choices on a Thanksgiving table exemplifies dining variety at its finest. That’s how you miraculously manage to clean your plate.

Did somebody say pie?

On that note, why do you always want more pie?

Pie. The grand finale of Thanksgiving dinner that you inevitably always have room for (thanks sensory specific satiety!). How many times have you heard or said, “I’ll just take a sliver…?” But that sliver tastes so good, why don’t you have just one more sliver? Half a pie later, you can’t believe you could have been so weak. Don’t worry, it’s not your fault.

No matter what type of pie you prefer, you can bet it has sugar in it. Maybe more than you thought. And this sugar content plays a huge role in why eating just a sliver of pie makes you crave even more.

Here’s the per-slice sugar content of America’s favorite pies, based on the highest rated Allrecipes.com iterations:

Current United States dietary guidelines don’t weigh in on recommended sugar intake. To give you some perspective, the World Health Organization recommends that adults consume no more than 25 grams of sugar a day. That’s about 6 teaspoons. Most of these pies cover that, and then some.

Even if you’re not particularly worried about your weight, this sugar surplus could have some interesting effects on your brain. Sugar activates your brain’s reward system in similar ways to alcohol, drugs, and hanging out with friends. The chemical dopamine underlies this elated feeling. If you’ve never eaten sugar before, an ice cream cone will cause a spike in dopamine and you will feel amazing. The more you eat ice cream, the more you need to get that amazing feeling back. It’s the same process that makes people addicted to alcohol and drugs, except far less extreme. Trying to eat just a sliver of pie? You better have some amazing willpower.

What happens in your body when you overeat?

According to Dr. Sasha Stiles, a physician at Tufts Medical Center, icy beverages cause your stomach to contract. The contractions massage the food in your stomach and push it along the gastrointestinal tract more quickly than usual. With an empty stomach, your body will think it’s hungry again. And that’s just the tip of the overeating iceberg.

Don’t get too scared. Thanksgiving only comes once a year. If you had Thanksgiving dinner every day though, it could wreak havoc on your body. NPR has the full story:

Overeating can easily spiral out of control until your body can’t adjust. For example, when you eat too much sugar, your pancreas produces extra insulin to get it out of the blood stream. When the brain senses a return to safe blood sugar levels, insulin production stops. Often too much sugar was taken away however, and cravings for even more sugar return with a vengeance.

Chronic overeating can even stop the receptors in your stomach from recognizing it’s full. Tissue at the top of the stomach sends a signal to the brain when the stomach fills up. Overeating frequently disrupts the messaging system and your brain doesn’t get the full stomach red flag.

Why are you so sleepy after Thanksgiving dinner?

We thought we had this one figured out with tryptophan in turkey. It turns out that’s a myth. What makes you sleepy is actually the tryptophan in carbohydrates.

The tryptophan in turkey doesn’t actually get to your brain

When you consume the amino acid tryptophan, your body metabolizes it to make niacin and serotonin. Serotonin produces a lovely relaxed feeling and helps create melatonin, a hormone that controls sleep cycles. Thus where the sleepy-turkey myth probably comes from.

Eating turkey is not equivalent to taking an IV of concentrated tryptophan. Turkey contains many other amino acids that compete with it to get into the bloodstream. So when you eat turkey, you don’t absorb enough tryptophan to even produce serotonin.

“Tryptophan, which is a bulky amino acid, would have to stand in line to get through the blood-brain barrier with a whole bunch of amino acids. It would be like standing in line when the Harry Potter movie comes out and you didn’t get in line early enough. The chances of getting in [to see the movie] are pretty slim. That’s what happens when you eat a protein-rich food. Tryptophan has to compete with all these other amino acids. It waits in line to get through the blood-brain barrier and very little of it makes it across.”

Furthermore, many other foods like chicken, pork, cheese, eggs, fish, and tofu pack the same tryptophan punch as turkey. Soybeans actually contain twice the tryptophan as turkey. So you can’t blame the turkey for your Thanksgiving sluggishness.

You do absorb tryptophan from carbohydrate-laden sides

An assortment of delectable carbohydrates usually round out our Thanksgiving plates. It turns out they don’t just taste good, they make us feel good too.

Remember how we don’t really absorb the tryptophan in turkey? Well, you can absorb it from carbohydrates–absorb it and use it to make serotonin. A study by Richard Wurtman confirmed that consuming carbohydrates stimulates serotonin production. This happens thanks to the hormone insulin.

Carbohydrates convert to glucose in the intestines and then glucose enters the bloodstream, triggering the release of insulin. Insulin decreases the blood plasma levels of other amino acids–AKA tryptophan’s competitors. Without the competition of other aminos, tryptophan can cross the blood brain barrier and convert to serotonin. Serotonin has been linked to relaxed moods and sleep, among other things.

So it’s your stuffing, and not the turkey itself, that causes that elated, post-dinner sleepiness.

That should be enough conversation starters to keep everyone from falling asleep in their mashed potatoes. Don’t forget to steer clear of icy beverages and double up on the cranberries. If you’re getting bored of turkey leftovers, just buy more condiments. But mostly, enjoy your Thanksgiving dinner!

About: Does Eating Turkey Make You Sleepy

WebMD: The Truth About Tryptophan

CompoundChem: How Do Tanning Lotions Work? The Chemistry of a Fake Tan

Guardian: The Science Behind Stuffing Your Face at Christmas

Psychology Today: Cranberries are a Smart Choice for Your Brain

Psychology Today: Serotonin: What It is and Why It’s Important for Weight Loss

Rodale News: Your Recommended Sugar Intake: Less Than a Soda Per Day

Medical Daily: How Does Sugar Affect Your Brain? Turns Out in a Very Similar Way to Drugs and Alcohol

Ashley Bell
Ashley Bell communicates about health and wellness every day as a non-profit Program Manager. She has a Bachelor’s degree in Business and Economics from the College of William and Mary, and loves to investigate what changes in healthy policy and research might mean for the future. Contact Ashley at staff@LawStreetMedia.com.
Share:
Related ItemsCranberryDinnerObesityOvereatingSleepThanksgivingTryptophanTurkey