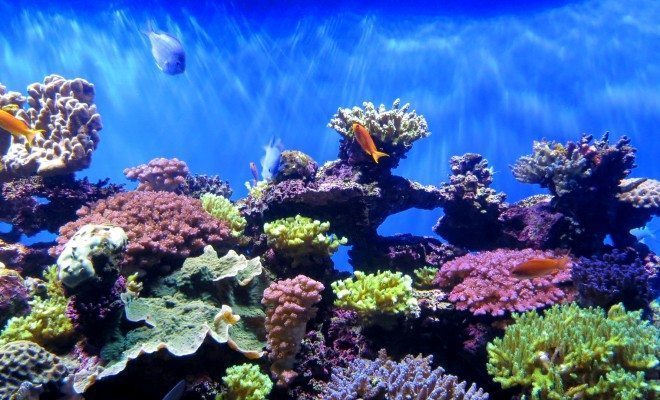 The Future is Bleached: The Trouble With the World’s Coral Reefs

A recent aerial survey of Australia’s Great Barrier Reef found that as much as 95 percent of the coral that makes up the northern portion of the reef is bleached. While this may have significance for marine biologists or other people who understand precisely what this means, to most people, bleaching is something you do to your laundry. However, coral bleaching, especially of the Great Barrier Reef, is a huge deal because it is yet another litmus test for the planet and another sign of the current economic challenges facing the environment.

Read on to find out about where the world’s coral is located, what coral bleaching is, and what the consequences are for the future of coral reefs and marine life.

Coral reefs are located off the coasts of more than 100 countries worldwide. They are primarily located in the tropic region, between the Tropics of Cancer and Capricorn. In some cases, coral is found outside of this region as long as warm currents flow there. Two examples are around Florida and outside parts of Japan. In total, coral covers approximately 110,000 square miles.

The first thing that must be understood about coral is that it’s not a rock or some type of inanimate object; corals are alive. And while they may look like plants, corals are actually animals. Like other animals, corals need to eat to survive because they can’t produce their own food. They get their nourishment from mutually beneficial relationships with algae, but corals also hunt prey. Using stinging tentacles, a coral paralyzes its prey and then slowly digests it.

Corals reproduce in two ways, they either produce both the egg and sperm to perform the fertilization process themselves, or they produce one of them, release it, and then rely on another colony to provide the other. Corals form when larvae attach themselves to rocks or other hard surfaces upon which they can grow. Coral reefs are made up of colonies of hard coral polyps. This type of coral secretes calcium carbonate, or limestone, to create their hard exoskeletons. Many organisms make up a coral reef but for corals to survive they form symbiotic relationships with  zooxanthellae algae, which is what gives the coral its unique colors.

The coral and the zooxanthellae essentially provide each other with added nourishment. Along with the zooxanthellae, corals also need several other conditions to survive; namely, sunlight, clear water, warm water, clean water and salt water.

Coral reefs are important because of their immense biodiversity. The reefs themselves only cover about 1 percent of the ocean floor yet are home to more than 25 percent of all marine life. To put it another way, there is more biodiversity in coral reefs than there is in tropical rain forests. The coral work in concert with the many species that inhabit the reefs; helping clean the water, provide food to one another, and even make the white sand that lines the world’s most exotic beaches. Coral also has a symbiotic relationship with humans, with as many as six million fishermen relying on the coral ecosystem for their livelihood.

The video below describes coral and its purpose in greater detail:

What’s happening to the Coral?

The attributes that make coral reefs special are also the aspects that face the most significant threats. Namely, because the reef is so biodiverse it is more resilient than a simpler ecosystem. But even with this built-in resiliency, coral reefs are dying at an accelerating rate. The World Wildlife Fund estimates that as many as a 25 percent of the world’s corals are already damaged beyond repair and another 66 percent are in danger of facing the same fate. So what exactly is happening?

Much, if not all, coral reef destruction can be attributed to human activity, the most blatant of which is rising ocean temperatures due to global warming. While coral reefs prefer warm water, they require an equilibrium to exist. This means that if water is too warm it can also be destructive. This is true for two reasons. First, if the water gets too hot the zooxanthellae will either die or be expelled from the coral. When the zooxanthellae are expelled the coral loses it color, which is where the term bleaching comes from. Second, warming water can also lead to harmful algae growth, which can cloud the water. This is problematic because corals need clear water to survive. When algae prevent sunlight from hitting corals, their zooxanthellae can die, killing the coral as well. Overfishing has also contributed to algae overgrowth because it eliminates the algae’s natural predators, removing barriers to growth.

There are also more direct human actions which negatively affect the coral. Dumping pollution in the water can increase nitrogen levels leading to algae overgrowth. Sediment and silt runoff from construction along coastal regions can also smother the corals blocking their access to sunlight. Destructive fishing practices like the use of poisonous chemicals and explosives to fish can also have serious consequences for coral reefs. Finally, tourism can pose a problem for corals because divers and snorkelers can stir up them up and cause damage. Perhaps the most directly harmful action is the direct mining of coral reefs for building materials and even for souvenirs.

The impact of the destruction of coral reefs is widespread. Not only do coral reefs provide people with things such as food and building materials, they are also used in the development of many new cancer-fighting medicines. Corals serve as a buffer for the shoreline and filter the water as well. From a more aesthetic viewpoint, corals are also the center of the tourism for many small countries. While the threat currently faced by coral reefs may not directly concern the United States, for smaller countries that depend on tourism as a major part of their economies, the loss of coral reefs could be an economic disaster.

The following video below explains the danger coral faces:

While the outlook for the world’s coral reefs is grim, it is not totally hopeless. After all, even when coral is bleached, zooxanthellae may still be able to return to the coral if conditions return to normal, allowing the reefs to survive. There are several efforts underway to protect and restore coral reefs globally. These include Marine Protection Areas, which regulate fishing, coastal development, and pollution. They also focus on raising awareness of the issues affecting coral. The Great Barrier Reef is one place that has been protected since the 1970s; however, even those efforts have had mixed results.

Along with those concerned with protecting the reefs are organizations aimed at restoring them, such as the Coral Restoration Foundation, which supports coral research and grows coral in nurseries to rebuild reefs. Efforts to restore coral reefs are underway in the United States as well. In 1998, the president established the Coral Reef Task Force (CRTF) to protect and restore reefs through mapping, monitoring, and research. As a result of the CRTF’s work, an additional law was passed in 2000, the Coral Reef Conservation Act, which required the National Oceanic and Atmospheric Administration to protect coral reefs.

On a more individual level, there are a number of things the average person can do to preserve coral reefs. These efforts include conserving water; reducing pollution; using organic and ecologically friendly fertilizers; disposing of trash appropriately; diving and snorkeling safely; and even planting trees to reduce run-off. People can also play a role by raising awareness and supporting businesses that promote conservation. The following video details some of the efforts to preserve coral reefs:

Coral reefs are the most biodiverse ecosystems on the planet, yet their very existence is increasingly threatened. Coral reef conditions are some of the most telling measures that humans have to understand the state of the environment. Most of the current threats faced by coral reefs are the products of human activity, and as a result, are in many ways preventable. By raising awareness and stopping harmful activities like dumping pollution, harmful fishing, and climate change, future damage can be prevented. But a considerable amount of damage has already been done and many wonder whether or not it is possible to reverse it. While many are skeptical that the entire situation can be reversed, a significant amount of damage may still be undone.

In light of coral reefs’ importance to marine biodiversity and maybe even modern medicine, protecting them should be a priority for coastal areas. The damage done to coral reefs is emblematic of the larger threats facing the environment. It is up to people to make a concerted effort to preserve, restore, and properly manage their activities to ensure coral and coral reefs remain.

Coral Reef Alliance: How Reefs Are Made

Coral Reef Alliance: What Do Coral Reefs Need To Survive?

State of the Planet: Losing Our Coral Reefs

The Nature Conservancy: Coral Reefs of the Tropics

Michael Sliwinski
Michael Sliwinski (@MoneyMike4289) is a 2011 graduate of Ohio University in Athens with a Bachelor’s in History, as well as a 2014 graduate of the University of Georgia with a Master’s in International Policy. In his free time he enjoys writing, reading, and outdoor activites, particularly basketball. Contact Michael at staff@LawStreetMedia.com.
Share:
Related ItemsBleachingCoral ReefsEcosystemOcean