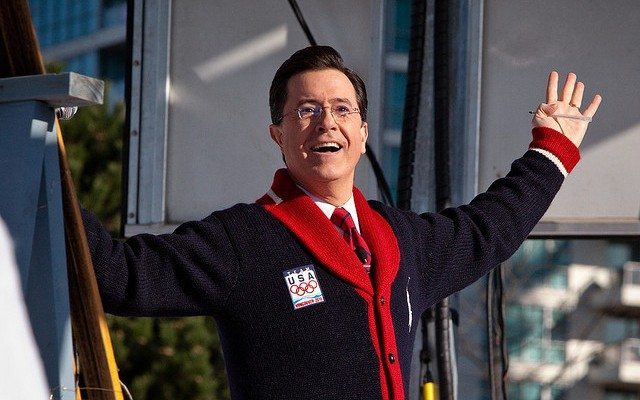 It may only be Stephen Colbert’s second week in the “Late Show” chair, but that didn’t stop him from seriously quizzing Texas Senator and Republican Presidential Candidate Ted Cruz  Monday night on Ronald Reagan, gay marriage, and the Constitution.

Reagan and his policies have been at the forefront of the Republican race following last week’s second Republican primary debate in the Reagan library. So much so, that candidates have begun comparing themselves in one way or another to the 40th president, despite their actual positions on key topics proving the contrary.

So when Cruz brought Reagan up, Colbert jumped at the chance to weed out another Reagan wannabee.

Here’s a clip from the interview below:

But if you either a. don’t have a pair of headphones handy, b. don’t have four and a half minutes to spare, or c. would prefer to read my attempt at witty commentary, enjoy some of the interview highlights below:

Colbert: “Reagan raised taxes, okay. Reagan actually had an amnesty program for illegal immigrants. Neither of those things would allow Reagan to be nominated today. So to what level can you truly emulate Ronald Reagan?”

Noting that Reagan worked across the aisle with Democratic Speaker of the House Tip O’Neil to get shit done, he continued:

“Isn’t that what people want more than anything else. Not just principles, but actions.”

Cruz:  Says no voter has told him that they want him to “give in more to Barack Obama.”

Colbert: Continued to press Cruz on whether or not he agrees with Reagan on raising taxes and amnesty for illegal immigrants.

Cruz: “No, of course not. But Ronald Reagan also signed the largest tax cut in history. He reduced government regulations from Washington, and economic growth exploded.”

Colbert: Quickly reminds Cruz that “when conditions changed in the country, he reversed his world’s largest tax cut and raised taxes when revenues did not match the expectations, so it’s a matter of compromising.”

(Did you hear that Cruz? Successful government requires compromise, not forced shutdowns.)

Cruz: Steers the conversation to his platform, telling Colbert that in a nutshell he thinks the country should “live within our means, stop bankrupting our kids and grandkids, and follow the Constitution.”

Colbert: “And no gay marriage?”

Cruz: “Well no , let’s be precise: Under the Constitution, marriage is a question for the states.”

Colbert: “It doesn’t mention marriage in the Constitution.”

Cruz: “The 10th Amendment says that if the Constitution doesn’t mention it, it’s a question for the states. … I don’t think we should entrust governing our society to five unelected lawyers in Washington.”

Colbert: Has to silence the audience’s boos for Cruz.

Touche, Cruz. So how about you get back to me after you win at the ballot box. But right now i’m awarding this political showdown Colbert-1, Cruz-0.

Alexis Evans
Alexis Evans is an Assistant Editor at Law Street and a Buckeye State native. She has a Bachelor’s Degree in Journalism and a minor in Business from Ohio University. Contact Alexis at aevans@LawStreetMedia.com.
Share:
Related ItemsConstitutionGay MarriageLate ShowMarriage EqualityRonald ReaganStephen ColbertTed Cruz