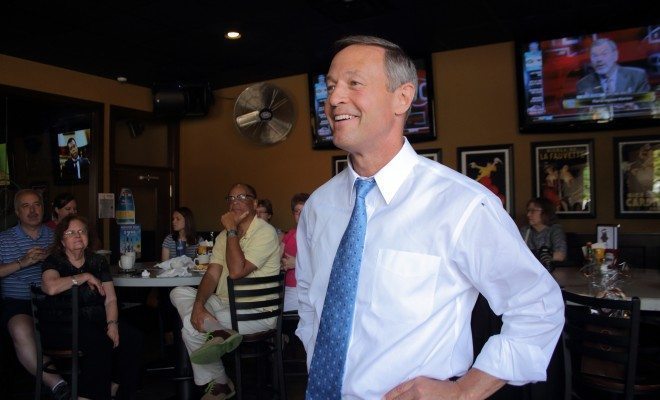 Although the Republican field for 2016 presidential nominees is quickly becoming as crowded as a particularly small clown car, the Democratic field is starting to get some new contenders as well. As of today, former Maryland Governor Martin O’Malley has just joined the crowd.

O’Malley went back to his roots for the announcement, to the city of Baltimore where he was once mayor. He in some ways embraced the controversy and violence that the city has been experiencing after the recent death of Freddie Gray, pointing out that it is a symptom of larger American problems. He stated:

While that’s a compelling talking point, O’Malley’s strongest point to his campaign appeared to be his determination to set himself apart from the current Democratic frontrunner, former Secretary of State Hillary Clinton. O’Malley appears to be positioning himself as left of Clinton (although of course not as far left as fellow candidate Senator Bernie Sanders) and a new voice in comparison to the Bush and Clinton families. One of the lines in his announcement took a shot at both Clinton and presumed Republican contender Jeb Bush. O’Malley stated:

Recently, the CEO of Goldman Sachs let his employees know that he’d be just fine with either Bush or Clinton. Well, I’ve got news for the bullies of Wall Street—the presidency is not a crown to be passed back and forth by you between two royal families.

Yet O’Malley has an uphill battle–exactly because of that moderate, outsider status he purports to represent. Clinton has long been viewed as a strong leader who is inevitably going to win the Democratic nomination–according to Real Clear Politics she’s polling at an average of 63.6 percent. Based on the same polls at a distant second (12.5 percent) is Senator Elizabeth Warren, who has said multiple times that she’s not running. Vice President Joe Biden–also not declared–is polling at 10 percent. Sanders is just behind him at almost 9 percent. Next, former Virginia Senator Jim Webb and Rhode Island Governor Lincoln Chaffee have 2.6 and 1.8 percent respectively. O’Malley finally clocks in at just under one percent.

Those aren’t particularly good odds–and that’s probably because there’s been nothing particularly exciting about O’Malley yet. While he may be running as a more liberal counterpoint to Clinton, he’s not as liberal as Sanders. To position yourself between two more dynamic and beloved candidates isn’t really a winning strategy.

Whether or not O’Malley actually has a shot will probably depend on Clinton herself. At this point, the Democratic nomination is pretty much hers to lose–a big scandal or health scare could do her in, but it seems like a pretty long shot. While O’Malley joining the race has made it a bit more crowded, she’s still standing on a very pretty pedestal.

Anneliese Mahoney
Anneliese Mahoney is Managing Editor at Law Street and a Connecticut transplant to Washington D.C. She has a Bachelor’s degree in International Affairs from the George Washington University, and a passion for law, politics, and social issues. Contact Anneliese at amahoney@LawStreetMedia.com.
Share:
Related Items2016 ElectionBernie SandersElection 2016Hillary ClintonJeb BushMartin O'MalleyMarylandPoliticsPresidencyPresident