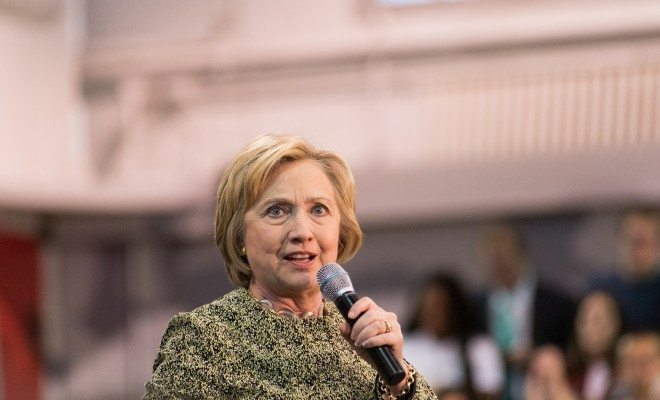 #DropOutHillary: Some on the Left Not Happy with Democratic Party’s Choice

At this point, Hillary Clinton is for all intents and purposes the Democratic Party’s nominee. While there are still a few contests to go, Bernie Sanders has been all but mathematically eliminated from the race. Yet a lot of people are still upset about the fact that Sanders isn’t going to be the nominee–or maybe they’re just upset that Clinton will be. As a result, #DropOutHillary is trending on Twitter, and has been for the last few days. And while it’s certainly reasonable to use social media to vent about your preferred candidate, it may be time for some Sanders supporters to face the facts: Clinton will almost certainly be the nominee, and if we don’t want a Donald Trump presidency, it may be time to rally around her.

Here’s a sampling of some of the tweets, but they mostly either attack Clinton’s record, extol Sanders’, or bizarrely accuse Twitter of trying to suppress the hashtag:

#DropOutHillary You are being forced on us by #ElectionFraud, empty suit MSM, & corruption. We will rebel against this as profoundly as 1776

#DropOutHillary not allowed to trend after 500k tweets and no.1 worldwide? Why @twitter @Support ?

#DropOutHillary because you’re a thief. You & the DNC have stolen our votes & disenfranchised us. #ElectionFraudpic.twitter.com/2l2OZPJleq

The anger against Clinton is palpable, particularly for some parts of the electorate. Fellow Law Streeter Sean Simon wrote an article about the hatred that many Americans have for Clinton (and Trump), pointing out that “if you don’t like one of them, chances are you really hate them.” That disgust for Clinton seems to be in full force right now, but as we get closer to the almost inevitable race between Trump and Clinton, it will be deeply problematic for the left if that kind of rhetoric doesn’t abate.

Clinton will be countering more attacks from Trump any day now, and if she has to deal with the same problems from the left, Trump’s jabs will hit even harder. Take the hashtag #DropOutHillary as an example–if you check news stories on the trending topic, a large chunk are by gleeful conservative outlets.

Public discourse should always allow us to vet, question, and debate our candidates. But calls for Clinton to drop out rather than discussing her platform in a constructive manner are unwarranted, unrealistic, and ultimately damaging. So for those advocating #DropOutHillary, is it really worth strengthening a Trump candidacy?

Anneliese Mahoney
Anneliese Mahoney is Managing Editor at Law Street and a Connecticut transplant to Washington D.C. She has a Bachelor’s degree in International Affairs from the George Washington University, and a passion for law, politics, and social issues. Contact Anneliese at amahoney@LawStreetMedia.com.
Share:
Related Items#DropOutHillaryBernie SandersDemocratDonald TrumpHillary ClintonRepublicanSocial MediaTwitter