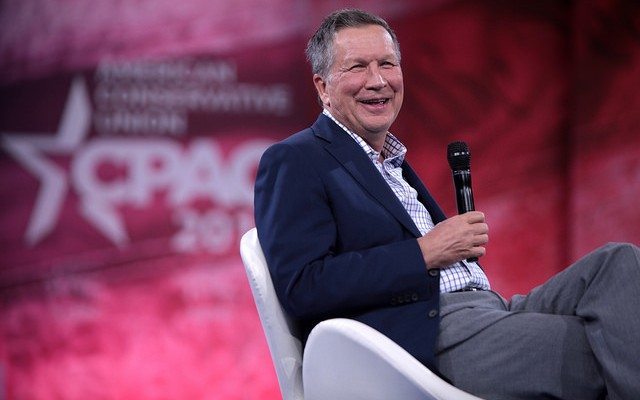 Following Donald Trump’s win in Indiana’s primary Tuesday, Ted Cruz finally did the inevitable and announced he’s dropping out of the presidential race. We really aren’t all that sad to see “lyin Ted” go, but we are bummed that we officially have to acknowledge Donald Trump as the Republican party’s presumptive nominee.

But wait, isn’t someone else still chugging along in the GOP primaries? What’s his name again?

Granted it’s kind of hard to remember the Ohio governor when he’s lost every state except his home state and still trails Cruz and Rubio, who both value numbers and logic and have dropped out.

Stephen Colbert couldn’t help but make light of this during Wednesday’s episode of the “Late Show.”

Colbert mocked Kasich’s mathematically impossible odds, as well as a recent video released from a pro-Kasich Super PAC imagining Kasich winning the nomination. In typical Colbert fashion, the comedian crafted his own heavily photoshopped ad imagining a world where Kasich is in fact president…and a five-term one at that!

In Colbert’s fantasy, President Kasich prompts Obama to resign early to make way for him, defeats ISIS, balances the budget, and defeats spider beasts from space. And we can’t forget to mention that he also throws the winning pass in the Super Bowl with three seconds left to, who else, John Kasich!

Sadly Kasich will likely never do any of these things, but it still makes us laugh.

Unfortunately, there has been lots of speculation that Kasich could announce he’s dropping out today, but that has not yet been officially confirmed.

Alexis Evans
Alexis Evans is an Assistant Editor at Law Street and a Buckeye State native. She has a Bachelor’s Degree in Journalism and a minor in Business from Ohio University. Contact Alexis at aevans@LawStreetMedia.com.
Share:
Related Items2016 Presidential ElectionHumorJohn KasichRepublican PrimariesStephen Colbert