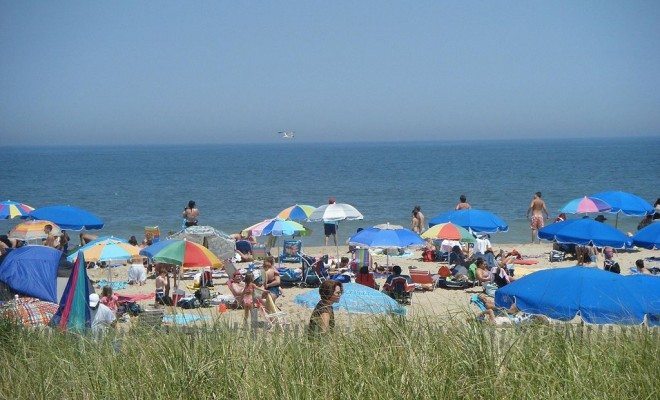 Image courtesy of [Dough4872 via Wikipedia]

The Dumbest Laws in the United States: MD, DE, & PA

East Coast states may be small, but that doesn’t mean they have fewer dumb laws than their larger counterparts. In Cumberland, Maryland, if you fall while playing games on a playground, you had better control your sailor mouth. In that city, using profane language on a playground is illegal. Speaking of parks, it is also illegal to knock stones into a public park in Cumberland.

Maryland as a state seems strongly opposed to swearing in general. In Rockville, swearing while on the highway, no matter how much other drivers piss you off, is illegal. And even If it is a sweltering hot day in Rockville, swimming in public fountains is not permitted.

As far as statewide Maryland laws go, there were many listed online, for example that oral sex cannot be given or received anywhere, but these laws lacked the proper citation, thus were omitted from my piece. Gotta have those references!

The same was the case in Pennsylvania. A few of the statewide laws that I encountered lacking the proper citation to back them up stated that ministers cannot perform marriages while either the bride or groom is drunk, and that you may not sing in the bathtub. The latter law, which I cannot prove to be valid, still made me wonder about a couple of things, like if it would be legal to sing in one of those bathtubs that can also be used as a shower as long as you were to use it as the shower.

I was able to find proof of the existence of two stupid laws in Bensalem, Pennsylvania, however. Both of the laws pertain to the game Bingo. First, those in charge of operating the game may not advertise the prizes offered. I mean, why even play unless you know the lucky card? Furthermore, one may not operate a game of Bingo if he or she was charged with a felony.

Delaware is a beautiful and proud state with some rather entertaining stupid laws. Movie-goers wanting to see their favorite R-rated movie won’t be able to from the comfort of their vehicle, as such questionable films cannot be shown in Delaware drive-ins. Rehoboth Beach is an intensely strict place in Delaware that prevents such heinous acts as changing your clothes in your car. On the note of changing clothes, you are also banned from changing into or out of a swimsuit in a public restroom. Seriously, this city is obsessed with clothing. It specifically bans any girl over the age of five from being in public without being fully clothed.

Children must adhere to strict laws on Halloween in Rehoboth Beach, Delaware. There, they may only trick-or-treat from six to eight in the evening, and if Halloween happens to fall on a Sunday, they must go door to door asking for candy on October 30 instead. And don’t even think about whispering in church or serving alcohol in nightclubs if people are dancing on the same premises simultaneously.

Thus concludes another exciting blog making us all wonder why so many strange and stupid laws exist.

Marisa Mostek
Marisa Mostek loves globetrotting and writing, so she is living the dream by writing while living abroad in Japan and working as an English teacher. Marisa received her undergraduate degree from the University of Colorado in Boulder and a certificate in journalism from UCLA. Contact Marisa at staff@LawStreetMedia.com.
Share:
Related ItemsDelawareDumb LawsEast CoastMarylandPennsylvania